Pancreatoduodenectomy (PD) remains the only potentially curative treatment for pancreatic ductal adenocarcinoma and other pancreatic tumours including neuroendocrine neoplasia and cystic neoplasms in the head or uncinate process of the pancreas. Mortality following PD has decreased to less than three percent over the last three decades but the rate of morbidity still remains high, ranging from 18% to 52% [1, 2, 3]. Postoperative pancreatic fistula (POPF) remains the Achilles’ heel of pancreatic resection, affecting between 13 to 41% of patients, and also leads to other frequent complications related to pancreatic resection including delayed gastric emptying (19-23%), intra-abdominal abscess formation (9-10%) and postpancreatectomy haemorrhage (1-8%) [1, 2, 3].

In an effort to reduce the rate of POPF after PD, numerous anastomotic techniques have been described with variable success [4, 5, 6, 7, 8, 9]. The majority of these techniques involve a hand sewn, sutured technique. However, eight decades on from a case report of a fatal anastomotic leak due to disruption of the catgut suture used to construct the pancreaticoenteric anastomosis, the search for the ideal suture continues [10]. Currently, there is a paucity of data comparing the appropriateness of various types of suture material for the pancreaticoenteric anastomosis. In particular, little is known about the effect of enzyme-rich pancreatic fluid on the mechanical integrity of various suture materials utilised in pancreaticoenteric anastomosis. We hypothesised that different suture materials would have differing susceptibility to reduction in tensile strength after incubation in a solution of pancreatic enzymes. This study aimed to investigate the comparative loss of tensile strength of various suture materials following incubation in a solution of pancreatic enzymes. 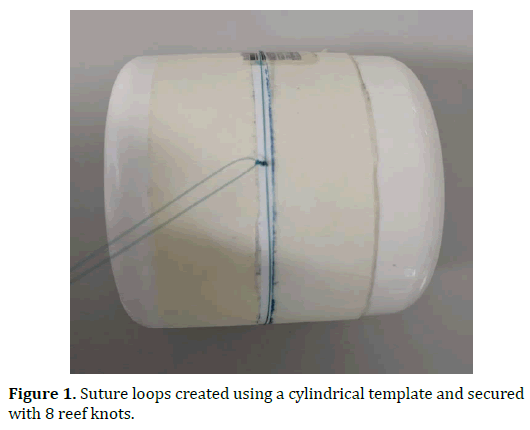 Pancreatic extract minimicrospheres (Creon® 25,000 unit capsules, Abbott Laboratories, Lake Bluff, IL, USA) were used to create a novel pancreatic enzyme solution (PES). Each capsule contains 36,000 USP units of lipase; 114,000 USP units of protease; 180,000 USP units of amylase. The contents of three capsules (total 1,200 mg) of Creon 25,000U were crushed in a mortar and pestle and then homogenised in a TissueLyser LT (Qiagen, Venlo, Netherlands) at 50 oscillations/second for 15 minutes. The resulting powder was then dissolved in 50mL of sterile water at room temperature, which was then centrifuged at 1,200G for two minutes, and the supernatant immediately stored at -80°C in 10mL aliquots until time of usage. This solution was fully thawed to room temperature prior to use for suture incubation.

The enzymatic activity of freeze-thawed PES was assessed by measuring the amylase and lipase activity of this solution (ARCHITECT Immunoassay, Abbott Diagnostics) at 0, 2, 4, 8, 16, 24, 48 and 72 hours, 5 days and 10 days after thawing. These assays were performed in the clinical diagnostics laboratory at our institution (Royal North Shore Hospital, Sydney, Australia).

All test and control suture incubations and subsequent experiments were performed in replicates of ten. Each suture loop was placed in a Corning® (Corning Inc, Corning NY, USA) 15 mL centrifuge tube containing either the test (PES) or control (normal saline) solution, and incubated at room temperature for 10 days. To ensure continued enzymatic activity of the PES during the incubation period, it was decided that the PES would be replenished with newly thawed solution with sufficient frequency to ensure that the trough level of amylase/lipase activity of the solution consistently remained higher than levels expected in POPF-related drain fluid (amylase and lipase >1,000 U/L).

At the end of the incubation period, the sutures were taken out of solution and tested for their tensile strengths using the Instron 8874 biaxial servohydraulic material testing system (Instron Co., Norwood, MA, USA). To conduct the analysis, the suture loop was mounted on the Instron 8874 as shown in Figure 2 before a tensile load was applied to failure at a constant displacement rate of 2 mm/s with a sampling rate of 50 Hz. The tensile strength was determined by measuring the maximum tensile force, expressed in Newtons, which the suture loop could withstand before breaking. 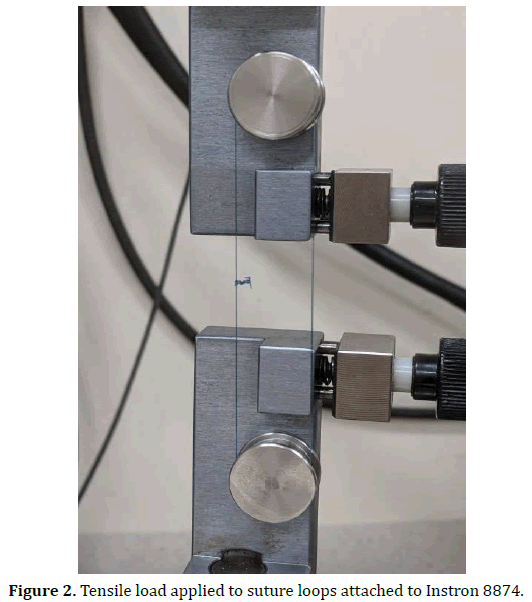 The amylase and lipase activities of the PES solution are detailed in Table 1. Based on these results, it was decided that replenishment of PES every 48 hours would be sufficient to maintain a level of enzymatic activity consistent with that encountered in POPF. 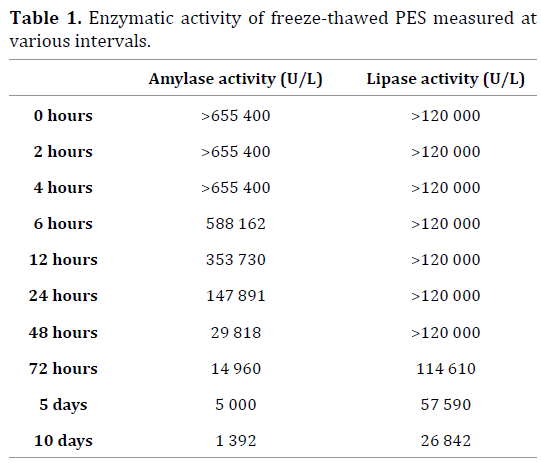 The effect of PES on suture tensile strength

The mean tensile strength of each suture material is shown in Table 2 and Figure 3. For four of the five suture types (polyglyconate, polydioxanone, polyester and barbed polybutester), there was no significant difference in tensile strength after exposure to PES. Polypropylene was the only suture type found to be statistically significantly weaker in PES compared to normal saline (33.4 ± 2.59 vs 36.51 ± 2.78 N; p=0.019). 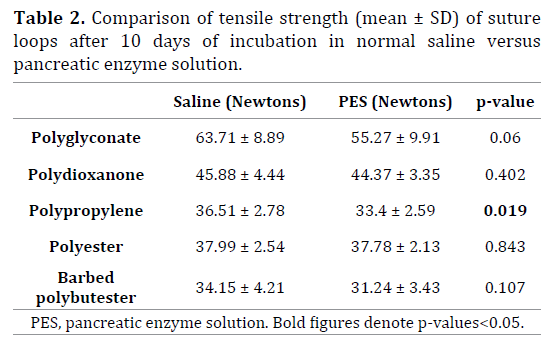 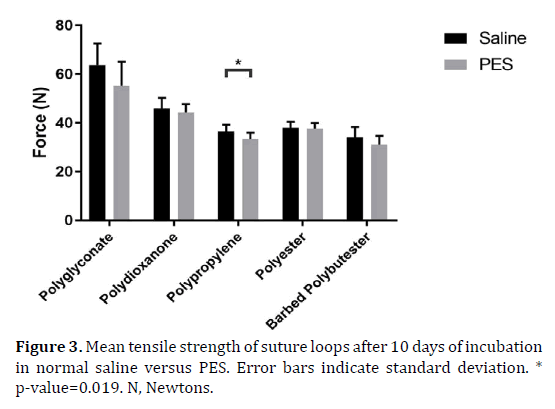 Although the type of suturing technique used in pancreaticoenteric anastomosis has been studied extensively to date, little is known about the suitability of different suture material types for this use. According to an international survey, a wide variation currently exists in suture selection amongst pancreatic surgeons [11]. It was reported that absorbable monofilament sutures are the most popular choice for inner layer suturing. For outer layer suturing, however, both non-absorbable braided and absorbable monofilament sutures were popular choices. Due to the variability in suture selection, there has been a recent interest in comparing suture types in an effort to optimise suture choice. Whilst no randomised clinical trials comparing sutures have been conducted yet, one case-control study has reported an association between polyester sutures and a decreased risk of POPF development [12].

The focus of existing literature has been on evaluating the tensile strength of suture material after exposure to either animal or human pancreatic and bile fluid. Benchtop analyses of suture strength after exposure to pancreatic fluid have previously been performed, however little to no data is given regarding the actual enzymatic activity of this fluid. Moreover, the fluid is taken from patient drain samples, which is inherently non-standardised throughout the course of the study period [13, 14, 15]. The present study has improved on this by introducing a novel method by which a simulated pancreatic enzyme solution can be created with a standardised and measurable level of enzymatic activity.

In keeping with the present study, Muftuoglu et al. reported that the mean baseline tensile strength of polypropylene decreased by 23% following a 7-day incubation period in pancreatic fluid [13]. In contrast, both Andrianello et al. and Karaman et al. reported no evidence of polypropylene sutures weakening in comparison to baseline values following 20-day and 10-day incubation periods respectively [14, 15]. Similarly, electron microscopic analysis of polypropylene sutures did not reveal any signs of disintegration in the suture’s architecture [15].

The development of clinically relevant POPF is multifactorial, and while reduction in the tensile strength of polypropylene was noted in our study, this may only be one of the contributing factors. Nonetheless, our findings suggest that further investigation is warranted comparing polypropylene sutures with other suture materials in a large clinical study to clarify this.

Studies have previously reported that polydioxanone sutures maintained the highest percentage of baseline strength [13, 14]. Polyester sutures were also demonstrated to retain almost all of their baseline strength following exposure to pancreatic fluid [14]. This is supported by our study which found no evidence of either polydioxanone or polyester sutures experiencing degradation by pancreatic enzymes. Further to this, there is also clinical evidence of a reduction in POPF with the use of polyester sutures for pancreaticoenteric anastomoses [12].

The present study also included barbed polybutester due to increasing use of this suture for pancreatic anastomoses in both open and robotic pancreatoduodenectomies. Whilst it was associated with the lowest tensile strength overall, there was no significant decrease in tensile strength with exposure to pancreatic enzymes, and the breaking point was at forces much higher than that encountered in pancreaticojejunostomy.

Our study has several limitations. The current analysis did not include other suture parameters that may be relevant to POPF development such as suture elongation and elasticity. This study only focused on the effect of pancreatic enzymes on sutures. Other post-operative factors such as pancreatitis or microbes, may also affect sutures in a way that was not investigated in the present study.

Some suture materials were provided in-kind by Medtronic (Minneapolis, MN, USA) for the conduct of this study.

This manuscript has not been published and is not under consideration elsewhere.