Pancreas Cancer-Associated Polymyositis of the Legs Regressing After Cephalic Duodenopancreatectomy: Case Report and Review of the Literature

Context Inflammatory myopathy, such as polymyositis, has been widely reported as paraneoplastic syndrome associated with various malignancies. However, its association with pancreas adenocarcinoma is very uncommon. Case report A case of a patient with paraneoplastic polymyositis of both legs associated with pancreatic adenocarcinoma is reported here. The diagnosis of polymyositis was highlighted by MRI and confirmed by histopathological examination. The surgical resection of the primary tumor led to the complete resolution of polymyositis with no further recurrence despite later metastases. Conclusion The association between pancreatic cancer and paraneoplastic polymyositis is very uncommon and has to be recognized by clinicians.

The association between polymyositis and cancer has been widely reported [1, 2]. Although it may occur with most neoplasms, only a few authors have reported it as a pancreatic cancer-associated paraneoplastic syndrome [1, 3, 4]. The diagnosis of paraneoplastic myositis is usually suspected by clinical examination and standard imaging, and confirmed by pathological examination and clinical evolution under treatment. Data about its pathogenesis is scarce. A case of a patient with paraneoplastic polymyositis of both legs associated with a pancreatic adenocarcinoma is reported here. Thereafter, literature about its presentation and pathogenesis is reviewed.

During the fourth cycle of chemotherapy, the patient reported persistent pain of both lower limbs causing major difficulties in mobilizing. The pain was described as crushing sensation and cramps localized to the anterior side of both thighs causing insomnia. Motor function, sensation and reflexes of lower limbs were normal. The skin had a paper-like texture in regard of the painful lesion. Biological markers were as follows: creatine kinase 1.6 N, lactate dehydrogenase 2.3 N and low levels of complement C3 and C4, with no evidence of inflammation. Doppler examination was unremarkable, hence excluding arterial or venous causes. MRI of lower limbs showed a diffuse T2 hyperintensity in both anterior muscles compartments associated with necrotic lesions (Figures 1 and 2), compatible with bilateral quadriceps polymyositis. 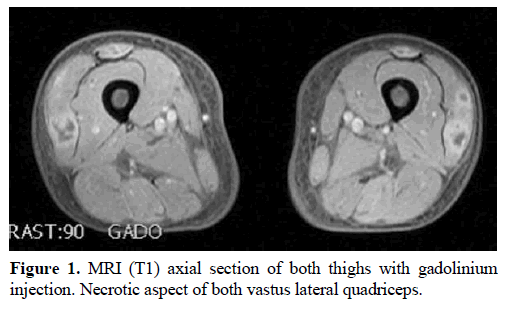 After four cycles of chemotherapy, a CT-scan showed a 30% reduction of tumor size with no vascular invasion. The pain was intense and difficult to control despite of reducing and spacing gemcitabine doses and increasing opiates doses. Surgical resection was performed, consisting in a cephalic duodenopancreatectomy. There were no post-operative complications. Pathological examination of the resected specimen revealed a pT3N1aM0R0 infiltrating ductal adenocarcinoma (AJCC 2009). The complete resolution of muscular pain was remarkable, leading to a significant improvement of mobility and ability to walk three days after surgery. Levels of creatine kinase, lactate dehydrogenase, carcinoembryonic antigen and CA 19-9 became normal.

Six months later, two liver metastases were found on CT-scan and the CA 19-9 rate increased to 1,900 IU/L (reference range: 0-40 IU/L). Because of its initial efficacy, chemotherapy by gemcitabine was repeated at the complete dose during 5 months. No recurrence of polymyositis occurred. A revaluation CT-scan was performed afterwards and showed a moderate regression of the hepatic lesions. Nine months later, the patient presented with a community-acquired pneumonia causing severe sepsis leading to his death.

The association between cancer and inflammatory myopathy, such as polymyositis or dermatomyositis, has been widely reported but the pathogenesis remains elusive. This involves all histological types of malignancies. Adenocarcinoma, however, is the most frequently implicated, particularly from lung, ovarian, cervical, colorectal, gastric and breast origin [1, 2]. However, polymyositis has been scarcely reported as paraneoplastic syndrome associated with pancreatic adenocarcinoma [1, 3, 4]. Cancer may occur between the 2 years preceding and the 3 years following the diagnosis of polymyositis [5]. Although there is no specific or sensitive clinical or biological marker for the diagnosis of paraneoplastic polymyositis, some characteristics have been identified in the literature. The mean age of diagnosis is 50-60 years [6]. The muscle weakness is commonly of proximal and symmetrical localization, is rapidly progressive and can be severe, often leading to immobility [7]. Respiratory muscles may be sometimes affected, which may be fatal [6, 8]. The most reported biologic findings are an increased level of creatine kinase and lower C3 and C4 levels [9]. Pathological examination usually shows inflammatory cell invading the muscle fibers. Authors also report invasion of CD8+ T-cells that may recognize muscle fiber surface antigens [10]. In the present case, an immunohistochemical overexpression of CD8+ T-cells was shown on muscles biopsies.

A case of inflammatory and necrotic myopathy in a patient with pancreas adenocarcinoma is reported here. Because of the late occurrence of the symptoms and its total regression after the surgical removal of the tumor, we can consider it as paraneoplastic syndrome. Other arguments were suggestive, such as biological markers, compatible MRI and pathological examination. Cases of gemcitabine-related myopathy have been reported [11, 12, 13]. In most cases, gemcitabine induced a “radiation recall”, consisting in inflammatory reactions triggered by cytotoxic drugs in previously irradiated areas. Only a few cases have reported a myotoxicity of the extremities associated with severe edema, probably related to vasculitis [12]. In the present case, myopathy was not likely to be due to gemcitabine because of its delayed presentation, its persistence after reducing chemotherapy doses and the absence of recurrence after reintroducing gemcitabine. Moreover, as the patient did not receive any radiation therapy, the hypothesis of radiation recall could be dismissed.

The presence of paraneoplastic polymyositis may be associated with a worse oncological prognosis [5]. The treatment of the tumor may lead to its remission [6]. Glucocorticosteroids have been trialed successfully in patients that could not undergo surgery [4]. Polymyositis may recur upon the relapse of malignancy [5]. Physiopathological hypothesis have been raised to explain the association of polymyositis with cancer. Tumor bioactive mediators may induce immune reactions against muscle fibers and skin. A compromised immune system and carcinogenic environmental factors may have a role to play in the coexistent occurrence of tumor and polymyositis [14]. Skin and muscle antigens may be cross-reactivity targets for the antitumoral immunological response [15].

A case of paraneoplastic polymyositis associated with pancreas adenocarcinoma is reported here. Muscular disorders regressed quickly after the surgical removal of primary tumor, strengthening the hypothesis about the cancer-related origin of these symptoms. Polymyositis is a well-described paraneoplastic syndrome, but its association with pancreas cancer is very uncommon and has to be recognized by clinicians.

All authors declare no conflicts of interest