Context Pancreatic desmoplastic small round cell tumour (DSRCT) is an extremely rare malignancy of which very few reports exist. It follows an aggressive course and has a dismal prognosis. Case Report A twenty four - year - old male presented with a one month history of rapidly progressive obstructive jaundice associated with abdominal pain suggestive of a biliary colic. Method Contrast-enhanced CT (CECT) of the abdomen revealed a pancreatic head mass. He underwent a pancreatico-duodenectomy and adjuvant chemotherapy and is disease free one year after surgery. Conclusion This is the first reported case of a pancreatic head DSRCT, discovered in a young male investigated for a short history of painful obstructive jaundice.

Desmoplastic small round cell tumours (DSRCT) originally described by Gerald and colleagues in 1989 are a group of extremely uncommon malignancies [1]. DSRCTs primarily occur in the abdominal cavity of adolescent males [2]. Although of uncertain origin, it is believed to arise from the mesothelium and is classified as a soft tissue sarcoma. No specific risk factors that have been attributed to DSRCT. It is seen predominantly in young males and has been shown to affect a multitude of organs including the abdominal cavity, small bowel mesentery, testes, ovaries and the pleura [2]. The liver and the lungs are two common sites for metastatic disease beyond the peritoneum and lymphatic spread to lymph nodes of the groin, neck and mediastinum has been described [3]. Standard treatment protocols are absent for DSCRT with evidence showing limited response to high dose chemotherapy in combination with debulking surgery and radiotherapy [4]. The prognosis for DSRCT is poor with less than 20% surviving beyond 2-3 years [5]. This is the first reported case of a patient with a pancreatic DSRCT presenting with biliary tract obstruction who underwent pancreatico-duodenectomy and adjuvant chemotherapy.

A previously well 24 - year - old male presented with a one month history of rapidly progressive obstructive jaundice associated with abdominal pain suggestive of a biliary colic. He was otherwise well except for anorexia of the same duration. His past medical and family history were unremarkable except for receiving treatment for meningitis 2 years back. General examination revealed he was deeply icteric, but free of supraclavicular lymphadenopathy and features of chronic liver disease. Abdominal examination showed tender hepatomegaly with a palpable gallbladder but no free fluid. His liver functions were deranged with significantly elevated serum bilirubin and alkaline phosphatase levels. Trans-abdominal ultrasonography showed a suspicious pancreatic head mass, a dilated common bile duct (1.8 cm) and a distended gallbladder with no calculi. Contrast-enhanced CT (CECT) of the abdomen revealed a pancreatic head mass encircling the main pancreatic duct and CBD opening. Tumour also extending in to the duodenal wall through muscularis propria without evidence of superior mesenteric or portal vessel involvement nor distal metastases. The pancreatic duct showed significant dilatation but there was no intraductal parenchymal calcification (Figures 1 & 2). These findings were corroborated by upper gastrointestinal endosonography. Pre-operative ERCP and stenting was done for nutritional optimization prior to surgery. Based on a preoperative diagnosis of an ampullary malignant stricture a standard pancreatico-duodenectomy (Whipple’s procedure) was performed. During surgery, the entire pancreas was found to exhibit a hard texture but there was no evidence of peritoneal or liver metastases. Postoperative recovery was uneventful except for a minor (ISGPF – grade A) pancreatic fistula which resolved with conservative management. The resected specimen (Figure 3) showed an irregular, solid, whitish mass measuring 4.4 x 3 x 3 cm. Histology demonstrated a lesion composed of nests of small round cells with scanty cytoplasm surrounded by prominent desmoplastic stroma, compatible with a poorly differentiated DSRCT of the pancreatic head (Figure 4). The resection margin was positive and there was perineural and vascular invasion. The tumour cells were negative for synaptophysin and chromogranin but positive for desmin and cytokeratin (Figure 5). Peripancreatic lymph nodes were positive for the tumour deposits. He received adjuvant combination chemotherapy that included vincristine, cyclophosphamide, doxorubicin, ifosfamide and etoposide. Clinical assessment and CECT done six months after surgery showed him to be well with no evidence of disease progression. 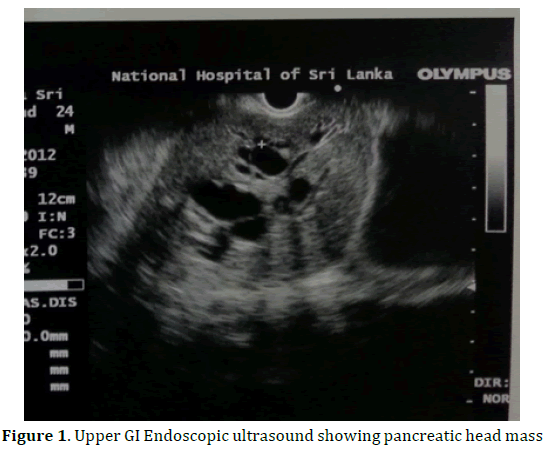 DSRCTs are a rare group of rapidly progressive sarcomatous malignancies. They usually present as painful abdominopelvic masses. Although the commonest site of origin is the peritoneum, extraperitoneal involvement is described in locations such as the testes, ovaries, and pleura [2]. Most pancreatic neoplasms are ductal adenocarcinomas and pancreatic DSRCTs are exceptionally rare in adults with only few reported cases thus far [6-8]. Since imaging characterisics are non-specific [9], the diagnosis usually becomes apparent only on histological examination of the specimen. The microscopic appearance is characterized by tubular units and scattered clusters of neoplastic cells embedded in desmoplastic stroma. The variable differentiation exhibited by DSRCTs including epithelial, mesothelial and neuronal types makes identification difficult [10, 11] though positive immunohistochemical staining for desmin, and cytokeratin is characteristic. The management of DSRCTs is a challenge due to their locally invasive and aggressive nature. No consensus exists on treatment due to the presence of only small case series of heterogeneous patient groups. Although radical excision is the primary determinant of long term survival, advanced disease at presentation usually precludes surgery with a curative intent [12, 13]. In these circumstances, a combination of debulking surgery, chemotherapy and radiotherapy have been employed [14-17], albeit in a small number of patients.

The prognosis of patients with DSRCT is generally poor with a median survival of 17 months (range 3-72) [18, 19]. Though he appears to be disease free six months after resection, the positive resection margin portends early local recurrence and is a poor prognostic factor.

To the best of our knowledge, this is the first reported case of a pancreatic DSRCT presenting with biliary tract obstruction and treated with a pancreaticoduodenectomy. DSRCT is a diagnosis that may be considered in young patients with rapidly progressive and atypical presentations of obstructive jaundice - a high index of suspicion is required because of its rarity and the absence of typical imaging characteristics. Early radical surgery with adjuvant chemotherapy may lead to tumor regression but like other aggressive sarcomas the prognosis remains poor.

The authors acknowledge all the ward staff who took care of our patient.