In the present report, we describe an extremely rare case wherein the patient developed systemic edema that led to a diagnosis of pancreatic exocrine insufficiency.

An Eighty-one-year-old man presented to our outpatient department with systemic edema. He had undergone pylorus-preserving pancreaticoduodenectomy for cancer of the head of the pancreas (pT3N1M0, stage III) 3 months previously. The patient was a past smoker, with a Brinkman index of 825 (15 cigarettes/day for 20-75 years). Moreover, chronic obstructive pulmonary disease (Global Initiative for Chronic Obstructive Lung Disease Stage II) was observed during the surgery. No other remarkable medical history was noted. His regular therapy included only the inhalation of tiotropium bromide hydrate (18 µg/day). His postoperative course was favorable, and no issues with dietary intake were encountered. He noticed the systemic edema 2 weeks before his hospital admission, which gradually became exacerbated. On admission, we observed the presence of marked edema, with a serum albumin level of 1.7 g/dL, and he was hospitalized to determine the cause of the edema. He had gained 10 kg of body weight over the last 2 months. However, pyrexia, nausea, vomiting, appetite impairment, dyspnea, coughing, sputum, palpitations, abdominal pain, diarrhea, and night sweats were not observed.

On admission, physical examination indicated a respiratory rate of 18 breaths/min, pulse rate of 80 beats/ min (regular pulse), blood pressure of 114/72 mmHg, and body temperature of 36.6°C. Moreover, his body height was 162.5 cm, body weight was 60.4 kg, and body mass index was 22.8. No abnormal findings were observed on examination of heart sounds and breath sounds. An operation scar was found in the midline, and a mild and soft swollen abdomen was observed; however, no tenderness was detected. In the extremities, marked pitting edema (fast edema) was observed on the dorsum hands and the thigh to the dorsum of the foot. Edema was also observed on the trunk of the body. Table 1 shows the findings of blood tests and urinalysis. Although hypoproteinemia was observed, no cardiac function disturbance, hepatic dysfunction, renal impairment, or proteinemia was observed. The brain natriuretic peptide (BNP) level was low enough to exclude heart failure (the cut off value for heart failure is 100 pg/mL) [5]. Also, transthoracic echocardiogram showed normal findings. With regard to thyroid function, the free T3 levels were low, but were unlikely to be the cause of the edema. Chest radiography indicated a pleural effusion (Figure 1). Ultrasonography of the abdomen and contrast-enhanced thoracicoabdominal computed tomography indicated pleural effusion and ascites (Figure 2), which were transudative. Cyto diagnosis of the ascites indicated class I findings, whereas bacterial and mycobacterium cultures yielded negative results. No increase in carcinoembryonic antigen (CEA) levels in the pleural effusion and ascites was observed. Moreover, no other findings indicating cancer recurrence was found. Although fecal fat staining yielded negative results, lower gastrointestinal endoscopy indicated occasional lipid droplets in the large intestine (Figure 3); thus, fat absorption impairment was suspected. The traditional method of fecal fat staining yielded a sensitivity and specificity of 76% and 99%, respectively, compared to the chemically measured fecal fat output [6]. The sensitivity of the latter method was not high. Because of the lack of a measurement apparatus, the exocrine pancreatic function test is not performed at our hospital. The direct testing of pancreatic exocrine insufficiency is the most sensitive method, but it is only used at specialized centers. Also, since the stool human fecal elastase-1 measurement is not covered by insurance in Japan, it is only used at some centers and at the hospital's expense. However, neutral fat indigestion and protein absorption impairment were suspected due to pancreatic exocrine insufficiency. Therefore, LipaCreon®–a high-titer pancreatin–was administered as diagnostic therapy and pancreatic enzyme replacement therapy (PERT). The inhalation of tiotropium bromide hydrate was continued without interruption. Because his vital signs were stable, he did not receive diuretic therapy over the hospital course. 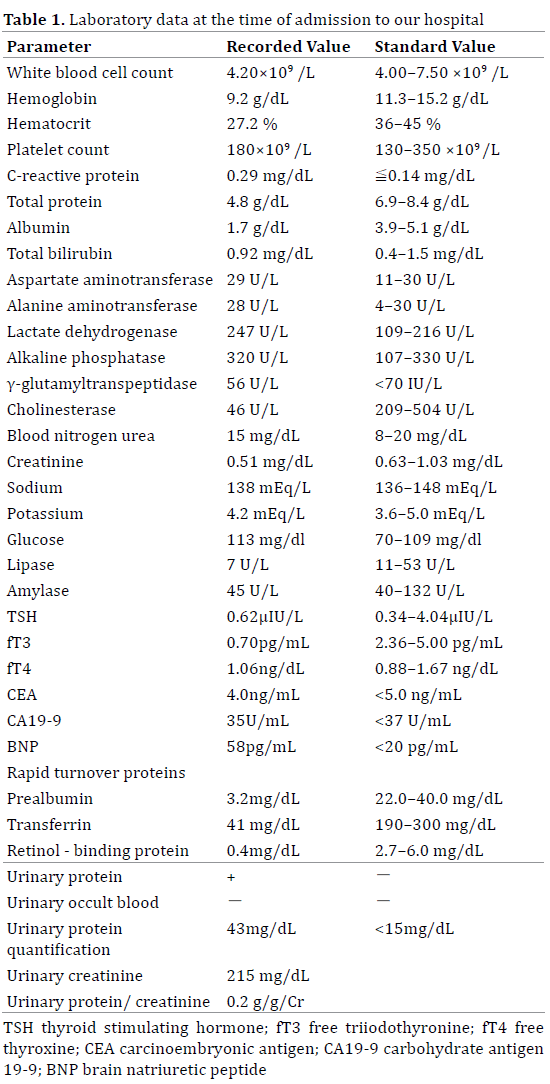 Figure 1. Chest radiography image
Bilateral pleural effusions are observed, although the effusions are more apparent on the left side. 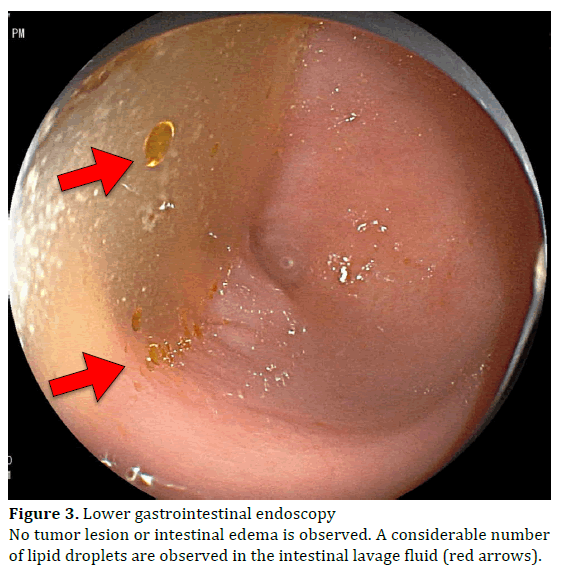 LipaCreon® is the first pancreatic digestive enzyme replacement therapy to be approved in Japan for treating pancreatic exocrine insufficiency, and it contains 40,000- 64,000 units of lipase, 34,000-60,000 units of amylase, and 2,240-3,960 units of protease per meal. It also has an enteric coating to prevent gastric juices from causing inactivity. After the fifth day of administration, the edema severity had begun to decrease, and rapid turnover protein levels gradually began to increase. On the fourteenth day of administration, the serum albumin level had increased, edema had almost completely disappeared, and pleural effusion and ascites had improved. Figure 4 shows the clinical course after admission. After initiating PERT, the patients' edema, body weight, albumin levels, and retinol-binding protein levels gradually improved. At 2 months after the initiation of PERT, no residual edema was observed, and the serum albumin level returned to normal. This clinical course led to a diagnosis of pancreatic exocrine insufficiency. PERT was continued for more than 1 year, and no relapse of edema or any other findings was observed. 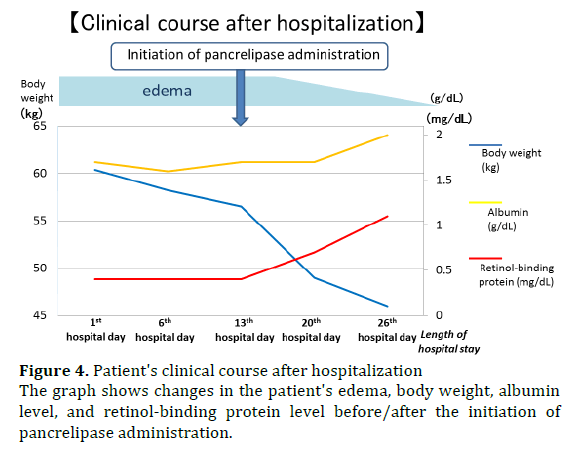 Primary pancreatic exocrine insufficiency is caused by some diseases such as pancreatic cancer, chronic pancreatitis, and cystic fibrosis, or it can occur after acute necrotizing pancreatitis and pancreatic resection [1]. Regardless of the cause, such cases present with decreased/defective secretion of the pancreatic enzyme in the duodenum. The decreased secretion of the pancreatic enzyme may lead to indigestion of fat, proteins, and carbohydrates, although the indigestion of fat is most commonly observed [4]. In addition to such indigestion, symptoms such as steatorrhea or diarrhea, fat-soluble vitamin deficiency or essential fatty acid deficiency [7], severe azotorrhea, meteorism, abdominal distension, and decreased appetite (eventually leading to malnutrition and weight loss) may be observed [8]. Some studies have recently reported cases of nonalcoholic steatohepatitis due to pancreatic exocrine insufficiency after pancreaticoduodenectomy [9-10]. As fat digestion/absorption is affected first, this condition is often diagnosed based on the presence of steatorrhea or diarrhea. Thus, cases wherein pancreatic exocrine insufficiency is diagnosed based on systemic edema due to hypoalbuminemia caused by protein absorption impairment, similar to that in the present case, are very rare [11-12].

As the exocrine pancreatic function test was not available at our hospital, PERT was administered as diagnostic therapy for pancreatic exocrine function [15]. Based on the changes in the rapid turnover protein levels after PERT and improvement in the edema, we concluded that the edema was caused by pancreatic exocrine insufficiency [16].

The authors have no conflict of interest to declare