Pancreatic Heterotopia in the Gallbladder Associated with Chronic Cholecystitis: A Rare Combination

Context Pancreatic heterotopia is a rare pathologic entity, previously reported in the stomach, duodenum and jejunum. It is mostly asymptomatic and rarely gives rise to complications. Localization of pancreatic heterotopia in the gallbladder is extremely rare and can be associated with cholecystitis or cholecystolithiasis. Case report We herein describe a case of a 39-year-old man who presented with biliary type pain with ultrasonographic evidence of a gallbladder polyp. Laparoscopic cholecystectomy was performed with uneventful recovery. Pathologic examination of the gallbladder detected a heterotopic focus of pancreatic tissue in its wall, associated with chronic cholecystitis with no gallstones. Conclusion Pancreatic heterotopia of the gallbladder is a very rare entity with unknown clinical significance. Awareness of this condition may facilitate its recognition which may shed more light on its clinical significance

Pancreatic heterotopia is a rare anomaly characterized by aberrantly located pancreatic tissue not having continuity with the pancreas. The usual sites involved include the gastric antrum, duodenum, jejunum, Meckel’s diverticulum, colon and ampulla of Vater [1] while the rarest is the gallbladder.

A 39-year-old man presented with repeated attacks of right hypochondriac pain referred to the back and right shoulder, especially after fatty meals. His past history was unremarkable.

On examination, the patient looked well. His pulse rate was 68 min-1, temperature 36.5°C, respiratory rate 20 min-1 and blood pressure 119/63 mmHg. The chest and heart were clinically normal and the abdomen was soft with no tenderness or organomegaly.

Blood examination, including liver and renal function, was within normal range. Abdominal ultrasound scan showed a small well-defined non-mobile echogenic structure attached to the wall of the gallbladder with no posterior shadowing. The features were suggestive of a gallbladder polyp (Figure 1), but no gallstones were detected. 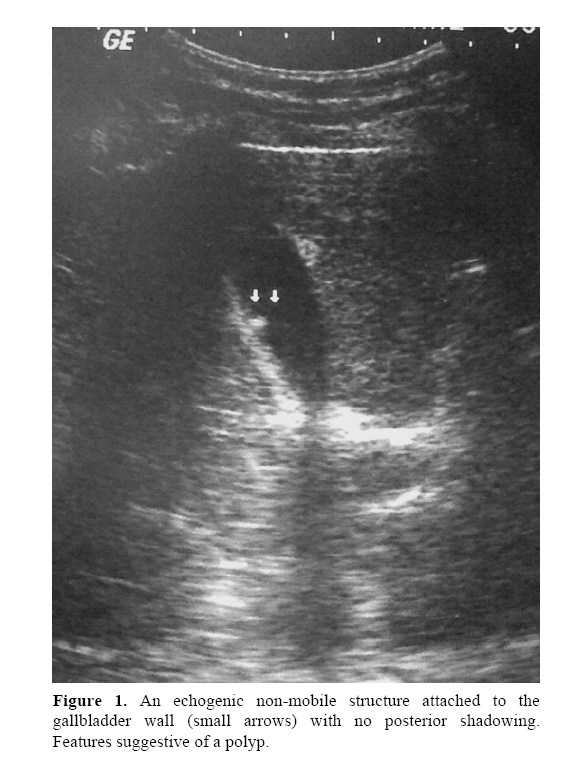 Figure 1. An echogenic non-mobile structure attached to the gallbladder wall (small arrows) with no posterior shadowing. Features suggestive of a polyp.

The presence of recurrent attacks of biliary-type pain and ultrasonic findings prompted a laparoscopic cholecystectomy. Intraoperatively, the gallbladder was covered with omental adhesions along the entire peritoneal surface. The gallbladder was removed after careful dissection of the adhesions.

Postoperatively, the patient convalesced well and was discharged for follow-up in the outpatient clinic. On gross examination, the gallbladder measured 6x3x2 cm and wall thickness varied from 0.3 to 0.5 cm. No gallstones were seen in the lumen. On microscopic examination, a prominent mucosal fold was identified, but no distinct polyp was found. There was mixed chronic inflammation in the lamina propria, submucosa and muscular wall, associated with mild fibrosis and muscular hypertrophy. A microscopic focus of pancreatic acinar and ductular tissue was identified on the serosal aspect of the gallbladder wall (Figure 2). 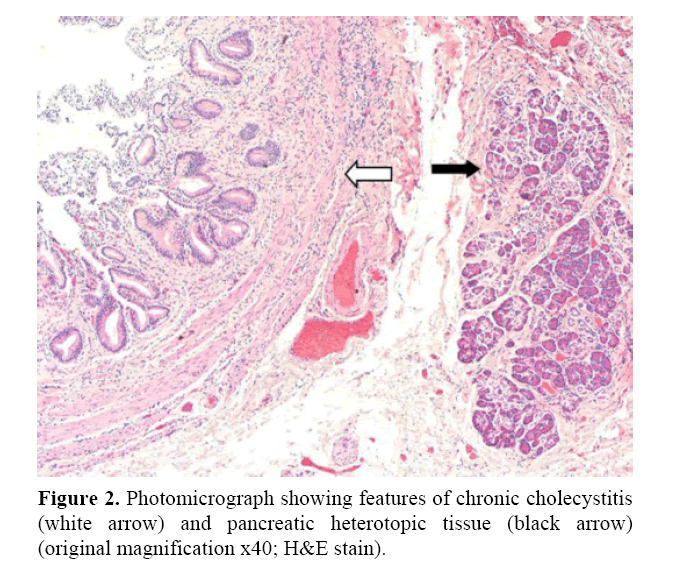 The etiology of ectopic pancreatic tissue is not yet clear, but it is believed to result from early separation of the pancreas during rotation of the gastrointestinal tract in the embryonic period [31]. The size of these lesions can vary from a microscopic focus to several centimeters [1, 32]. Histologically, it can be complete heterotopia, composed of acini, duct and islets of Langerhans, or incomplete heterotopia if it lacks the islets of Langerhans.

Pancreatic heterotopia can affect all ages, and men are usually affected three times more than women [1]. The majority of cases are asymptomatic; but it can be associated with obstruction of the bile duct, cholelithiasis, acute or chronic pancreatitis, hyperinsulinism, intussusception and gastrointestinal hemorrhage In addition, heterotopic pancreatic tissue is prone to different pathologic changes, such as cyst or abscess formation, acute pancreatitis and calcification. Most cases of pancreatic heterotopia have biologically benign behavior; however, only a few reports have described malignant degeneration [33, 34]. Moreover, islet cell tumors, cystic tumors and pancreatic intraepithelial neoplasia, a precursor of pancreatic ductal carcinoma, can arise from heterotopic pancreatic tissue [24]. Therefore, incidentally discovered pancreatic heterotopia should be completely excised to avoid such adverse events

The differential diagnosis of aberrant pancreatic heterotopia includes adenomyoma, leiomyoma and lymphoma. Unfortunately, imaging studies including ultrasound and computed tomography are usually nonspecific and the number of reported cases is not enough to characterize the features of this rare entity endoscopically or radiologically.

Microscopically, this tumor-like lesion can be misinterpreted as a neuroendocrine tumor; however, an accurate diagnosis can be reached by pathologists who are aware of this condition. In the case presented, the pancreatic tissue showed no islets of Langerhans; it was therefore subtyped as incomplete pancreatic heterotopia. For pancreatic heterotopia of the gallbladder, cholecystectomy is curative. In our case, the patient was symptom-free post-cholecystectomy and remains so on follow-up. We believe this is the

second report of pancreatic heterotopia of the gallbladder from Saudi Arabia [20].

Pancreatic heterotopia of the gallbladder is a very rare entity and its clinical significance is still undetermined. It is usually detected as an incidental microscopic finding in a gallbladder specimen removed by cholecystectomy. Awareness of this under-reported condition may facilitate its recognition when encountered and this, in turn, may shed more light on its clinical significance.