Context Pancreatic lymphoepithelial cyst is a rare benign lesion that usually presents itself as an incidental radiological finding. Symptoms may include abdominal pain, weight loss, nausea or compression of adjacent structures. The differential diagnosis includes most of the pancreatic cystic lesions, even benign or malignant tumours. In most cases, for the final diagnosis fine needle aspiration or surgery can be required. Case report We report a case of a giant PLC in a 43-years-old man with abdominal pain and weight loss. In this case, radical surgery was considered a too difficult procedure and due to benignity of the tumour, conservative resection was elected. Conclusion Surgery can be the final diagnosis test in case of PLC due to diagnostic uncertainty. Conservative resection can be a good option in case of complex resection, with a low rate of postoperative complications and without risk of tumoral degeneration.

The pancreatic lymphoepithelial cyst (PLC) is a rare benign lesion of undetermined etiology that poses the differential diagnosis with pseudocyst, teratoma (dermal cyst), and other tumour lesions (serous cystadenoma and mucinous). There are less than 200 PLC cases described in the English literature worldwide [4]. Histologically, it corresponds to a cyst with keratinous material and a wall lined with stratified squamous epithelium surrounded by lymphoid tissue in which germinal centres are found [5]. Anecdotally, PLC with sebaceous glands of the pancreas has been reported [6].

We report a case of a 43-years-old man with a history of hiatal hernia, esophagitis grade II/IV and hepatitis A, studied by epigastric and abdominal pain in the right upper quadrant in the last three months with weight loss of 7-8 kg in the last year. A physical examination revealed pain in the epigastrium and right upper quadrant with palpation of a rounded mass at that level. Biochemistry showed increased transaminases (AST=48 U/L, ALT=133 U/L, GGT=1039 U/L, alkaline phosphatase=497 U/L). Hydatid serology was negative. The CA 19.9 was 80.63 U/mL (range 0-37 U/mL) and the CT scan (Figure 1) revealed a round hypodense lesion of 12.6 x 11.3 cm, with wall enhancement and presence of halo and some calcification blades inside at the level of pancreas head-body, neighbouring structures being displaced. The MRI showed a lesion of 13 x 12 cm, hyperintense on T2 and intermediate signal on T1 with enhanced wall, presence of lineal images, rounded inside with liquid content at the level of pancreas head-body. Above said tests marked as first diagnostic option hydatid cyst with differential diagnosis of cystic tumour (mucinous cystic neoplasm/cystadenoma/cistoadenocarcinoma). The size and the elevation of CA 19.9 aroused uncertainties about the malignant nature of the tumour, which in addition to the patient's symptoms advised the use of surgical exploration and the rejection of endoscopic ultrasound and fine needle aspiration. An encapsulated mass of 15 cm with liquid content was found pending on the head of the pancreas, infiltrating the mesenteric root. The mass was punctured and 250 cc of yellowish milky material was aspirated. Intra-operative biopsy of capsule was taken, reported as possible PLC. Due to the infiltration of the mesenteric root and the impossibility of complete resection, a wide excision of capsule was decided (Figure 2), leaving an omentum flap in the bed of the cyst. The postoperative course was uneventful and the patient was discharged on the fifth postoperative day. The definitive microscopic findings were (Figure 3) the solid fragments received were composed by a dense fibrous tissue with a variable thickness (mean 1.5 cm), an internal squamous lining focally attenuated or denudated, and a rim of lymphoid tissue arranged in a subepithelial band with occasional formation of lymphoid follicles. The greasy content filling the cyst was laminated keratin. Differential diagnostic was made with dermoid cyst and epidermoid cyst, but the lack of sebaceous or mucinous differentiation, as well as the presence of typically lymphoid tissue provided evidence of lymphoepithelial cyst. One year after surgery the patient was asymptomatic and his laboratory parameters normalised. 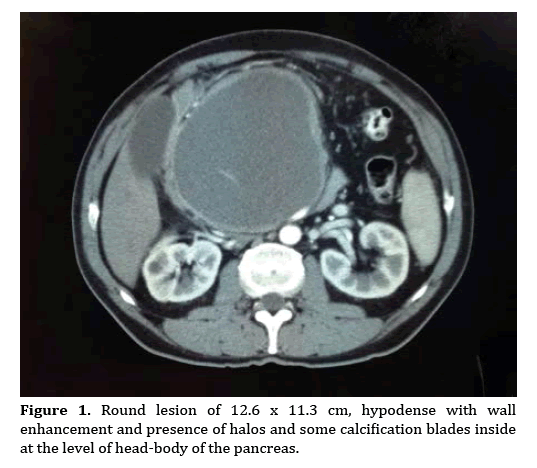 Figure 1. Round lesion of 12.6 x 11.3 cm, hypodense with wall enhancement and presence of halos and some calcification blades inside at the level of head-body of the pancreas. Figure 3. (a.). Gross appearance of the cystic lesion with a 1.5 cm thick wall and a smooth internal lining, once the greasy material was removed. The main diameter of the mass was 8.5 cm and there was not pancreatic tissue surrounding the mass in the specimen. (b.). Wall of the lymphoepithelial cyst with a squamous lining focally attenuated (right), and a subepithelial rim of lymphoid cells and follicles. (c.). Invaginated areas of epithelium filled with laminated keratin (asterisk) close to pseudopapillary areas (arrow) composed by dense lymphoid tissue. (d.). Detail of squamous epithelium in an area with scattered intraepithelial lymphocytes.

The lymphoepithelial cysts have been described in the parotid gland, submandibular gland, lung, intrathoracic region and especially in lateral neck, but rarely found in the pancreatic location. Even though there are many theories about its origin the fact is that it still remains unknown. Nonehtless, the most accepted assumption is the one made by Truong et al. [8], where it is argued that the injury arises from metaplasia experiencing benign exclusion of ectopic pancreatic tissue in a peri-pancreatic lymph node.

The PLC are more common in middle-aged men, with a ratio of 4:1 and its main location is in peri-pancreatic tissue followed by the head of the pancreas [3, 6, 9]. It may be unilocular or multilocular (most often) and its clinical symptoms are usually abdominal pain followed by vomiting and weight loss. PLC could be either asymptomatic or an incidental finding by image tests [10]. CT scan shows well-defined hypodense round lesions that protrude on the surface of the pancreas and in MRI image appears as hypointense on T1 and hyperintense on T2 [11]. The “cheerios-like” appearance in the MRI has been reported and could help in the differential diagnosis [12].

The study of the material obtained by puncture guided fine needle aspiration (FNA) would sometimes be enough for a preoperative diagnosis of benign lesion, which would exclude asymptomatic patients in need of surgery [13, 14], but the difficulty in differential diagnosis with FNA and frequently elevated tumour markers in cyst fluid (CEA and CA-19.9 with normal or elevated amylase) [15, 16], makes resection the most usual treatment, ranging from enucleation of the lesion to partial pancreatectomy (depending on the location). In very few cases, a nonresective surgical procedure has been performed, but given the intraoperative diagnosis of PLC and the need of an extreme pancreatic resection we made the decision of performing a partial resection and strict follow-up. PLC presents a good outcome in the long term without evidence of malignancy or recurrence after complete excision [17]. The long-term results with partial excision are scarce. In a review of 117 cases by Mege et al. [4] only 26 (22%) of them had a preoperative diagnosis of PLC, 25 patients by FNA and 1 patient by MRI. 13 patients with preoperative diagnosis of PLC were not operated on and had careful clinical and biological follow-up. 104 patients underwent surgery. Limited surgery was performed in 40 cases, and large resection was performed in 56 cases. In case of limited resection, no evidence of malignancy or reoperation has been reported. However, if the malignant potential of the tumour cannot be ruled out despite exhaustive exploration including FNA, pancreatic resection is necessary.