Context Intraductal papillary mucinous neoplasms (IPMNs) are being recognized with increased frequency and are the most common indication of pancreatic surgery at specialized centers. Many IPMN patients are found to have non-IPMN related pancreatic tumors like pancreatic neuroendocrine tumors (PNTs). Objective To study the prevalence of PNTs among patients with IPMN. Methods Patients who underwent surgical resection for IPMN were retrospectively reviewed for presence of histologically proven PNTs. The PNTs were evaluated for the patient demographics, imaging characteristics, histology, and surgical staging. Results Between January 2002 and October 2007, 104 patients underwent surgery for pancreatic IPMN. Among these, 4 patients (3.8%) were diagnosed with concomitant PNTs (1 male, 3 females; median age 72 years). Three patients had branch duct type-IPMN (cyst size: 19 mm, 15 mm and 27 mm), and one had main duct type-IPMN. Only one branch duct IPMN had adenocarcinoma, other three had low grade/borderline dysplasia. The median size of PNT was 10 mm (range 8-16 mm) and all were missed on the cross sectional imaging. Three patients were recognized by endoscopic ultrasound (EUS) and the fine needle aspiration confirmed the diagnosis in 1/3. Only one patient had metastatic PNT to lymph node, the other three were low grade lesions. Conclusion IPMN and PNT can coexist. The prevalence of PNT among IPMN patients is low (3.8%). Our study is limited by small sample size. Large studies with large number of patients are needed to further explore this association.

In recent years, intraductal papillary mucinous neoplasms (IPMNs) have been increasingly recognized, accounting for 8-20% of all resected pancreatic neoplasms [1, 2]. IPMN patients have been reported to have an increased incidence of other pancreatic and extrapancreatic malignancies [3]. Although synchronous presence of pancreatic neuroendocrine tumors (PNTs) has been described among patients with IPMN [3], it is unclear whether this is a true association or coincidence. The purpose of our study was to study the prevalence of PNT among patients with surgically proven IPMN and to recognize their clinical and pathological features. Additionally, we reviewed the existing available literature describing patients with concomitant IPMN and PNT.

We conducted a retrospective chart review of all the pancreatic surgeries for IPMN patients. Patients with combined IPMN and PNT based on histology were identified. In these patients, we noted clinical presentation, demographics, preoperative imaging, endoscopic ultrasound (EUS) and type of surgery. The pathology evaluation of IPMN and PNT were done according to the WHO criteria.

The study was approved by the Mayo Clinic IRB.

Between January 2002 and October 2007, 104 patients underwent surgery for pancreatic IPMN. Among these, 4 patients (3.8%) were diagnosed with concomitant PNT (1 male, 3 females; median age 72 years). The clinical, demographic, and pathologic features of these patients are described in Table 1. and cysts associated with mass (Patient #4). The fine needle aspiration (FNA) confirmed adenocarcinoma in Patient #4. The EUS-FNA was non-diagnostic in Patient #3 with 15 mm simple cyst. No FNA of the pancreatic cystic lesion was done in Patient # 2 as the dominant lesion was the 16 mm PNT and FNA of IPMN was thought not to change the management of this patient (Figure 2). Two patients (Patient #1 and Patient #4) underwent total pancreatectomy and other two had distal pancreatectomy. The patient with positive FNA for adenocarcinoma (Patient #4) had well differentiated adenocarcinoma in the background of IPMN with surgical staging T3N1MX. All other IPMN were low risk on surgical pathology (low grade and borderline dysplasia) (Figure 3). 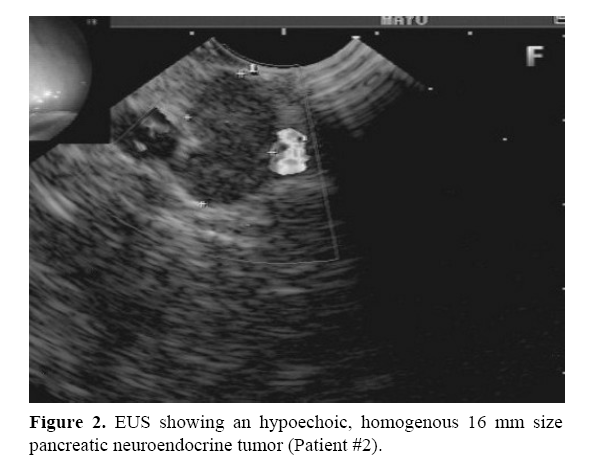 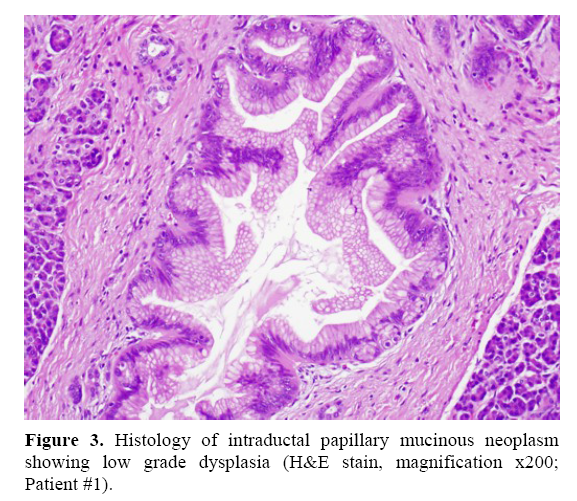 All the patients had missed PNT lesions on cross sectional imaging and 3/4 were identified incidentally on EUS. All three patient underwent EUS-FNA, and the diagnosis was confirmed in one 1 (Patient #2), other two patients had non-diagnostic specimens (benign pancreatic tissue). On surgical pathology, only one patient (Patient #2; Figure 4) had metastatic PNT to peripancreatic lymph nodes, and other three were well differentiated PNTs. All patients had nonfunctioning PNT. 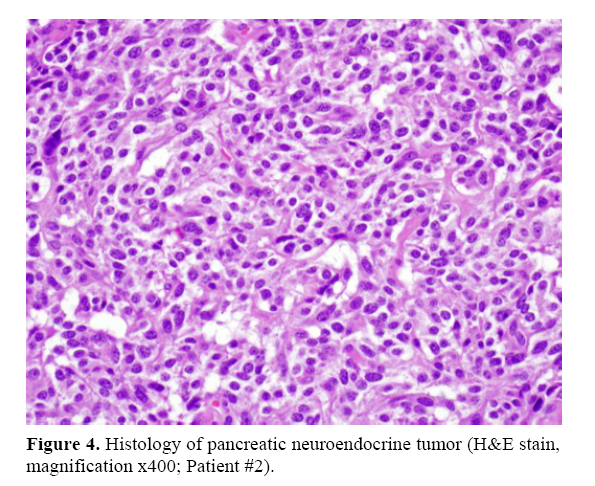 Our study shows that PNT can be found concomitantly among patient with IPMN. This is similar to three reports describing this association among 10 patients [4, 5, 6]. Our study found that the prevalence of PNT among IPMN is low (3.8%), similar to previous reports by Goh et al. [4] and Zhao et al. [5] describing prevalence of 2.8% and 4.6%, respectively.

Whether this association is real or by chance is intriguing. As both IPMN and PNT are rare tumors, their coexistence has been hypothesized more frequently than expected [6]. Marrache et al. [6] hypothesized that coexistence of these tumors from two different cell lineages can be due to multiple possible factors including common neoplastic progenitor, transdifferentiation of one cell type into another and possibly a common precancerous condition. This is supported by the study by Terada et al. [7], who discovered neuroendocrine cells among pancreatic ductal cells in IPMN patients. Similarly, neuroendocrine cells have been found among patients with ductal adenocarcinoma [8, 9].

With regard to the clinical and imaging characteristics, previously reported patients with concomitant IPMN and PNT had mean age of 60 years at diagnosis, had smaller PNT (mean size 15 mm), and the majority (8/10) had diagnosis of IPMN made preoperatively by cross sectional imaging. In our series, patients were slightly older (mean age 72 years), the PNT size matched the previous data, and all IPMN lesions were diagnosed preoperatively by cross sectional imaging. Similar to our series, all of the PNT lesions were nonfunctional and no associated hormone excess syndrome associated with them.

Regarding the pathologic behavior of PNT associated with IPMN, only 1/4 patients were malignant. These results are similar to previously reported cases where 3/10 PNT were malignant. [4, 5, 6]. The majority of previously reported patients (7/10) had diagnosis of only one type of pathology (IPMN or PNT) seen preoperatively, and the second lesion was diagnosed incidentally on surgical specimen. Unlike these previous reports, in our study majority (3/4) of the PNTs were seen preoperatively at EUS; however, the diagnosis was confirmed with FNA only in one case. Only one patient with 11 mm size PNT was missed by EUS and only found incidentally on final pathology. EUS is therefore more sensitive then other cross sectional imaging techniques (CT or MRI) to preoperatively diagnose small PNT. However, it is important to recognize that EUS-FNA could not establish diagnosis in majority, which might be related to very small size of the PNTs in our series. Therefore, surgical pathology is critical to evaluate all the solid pancreatic tumors, even when the EUS-FNA is negative.

In conclusion, pancreatic IPMN and PNT can rarely coexist. The available data is insufficient to conclude that these lesions are interrelated. Future studies with large number of patients will be needed to explore this association. We are currently working on a multicenter IPMN registry study where we will further examine this association in a large cohort of IPMN patients.

Sources of support None