Pharmacogenomics in Pancreatic Adenocarcinoma: New Data and Their Clinical Implications

Despite advances and investments in translation research, clinical trials and health service in general, there is no significantimpact on the survival of most patients diagnosed with advanced pancreatic adenocarcinoma. It is broadly recognizedthough that there is a small minority of patients who really benefit from particular treatments for reason usually not wellunderstood. Light to this fact is gradually shed by developments in the field of pharmacogenomics, which plays pivotal role in what we call individualized medicine. In that perspective, it is of most importance to present the significant developments in pharmacogenomics announced in the recent 2013 American Society of Clinical Oncology Annual Meeting. First, the predictive role of hENT1, which codes for a gemcitabine transporter into cells, was highlighted and might help us decide whether we benefit from gemcitabine or 5-fluorouracil in the adjuvant setting (Abstract #4006). Second, authors presented the negative predictive role of SPARC stroma and cytoplasmic expression in patients treated with adjuvant gemcitabine (within the CONCO-001 study) as they reported poor outcome of those having high expression, not seen in patients on observation (Abstract #4016). Finally, a study which might be a basis for future strategies and as great food for scientific thought suggested that selection of cytotoxic treatment based on gene expression profiling is feasible in clinical practice and may help improve treatment efficacy as well as predict for drug resistance (Abstract #4017). Of course, there is a long way to go before implementation of these genomic findings, with the exception of hENT1 which seems to be close for clinical use.

Pancreatic cancer is a lethal malignancy with a 5-year survival rate of only 6% [1]. Surgical resection remains the only cure, yet even after resection the 5-year survival is only 20% due to a high recurrence rate. Thus, a high proportion of patients with this disease will ultimately require systemic chemotherapy for advanced pancreatic cancer. While the advent of personalized medicine has resulted in significant advances in the management of many cancer types, the standard of care for pancreatic cancer remains gemcitabine based, with very few exceptions.

What Did We Know Before 2013 ASCO Annual Meeting?

Despite recent developments in the management of pancreatic cancer, the outcome of this disease for the majority of patients is disappointing. It has been suggested from most clinical studies conducted so far that there is a small group of patients that benefit the most from specific cytotoxics or biological agents though the reason has not been particularly understood. In previous years, the predictive role of ribonucleotide reductase M1 (RRM1) and human equilibrative nucleoside transporter 1 (hENT1) genes in the efficacy and toxicity of gemcitabine had been suggested in patients with pancreatic cancer [2, 3, 4]. Recently tested regimens include FOLFIRINOX and gemcitabine plus nab-paclitaxel [5, 6]. Recently, a spark of interest has arisen in this field and work has been conduced to explore the importance of hENT1 and SPARC in patients with pancreatic cancer, a step towards personalized medicine.

What Did We Learn from 2013 ASCO Annual Meeting?

In this paper, we have focused on the most notable scientific data on pharmacogenomics of pancreatic cancer affecting treatment outcome and prognosis.

The European Study Group for Pancreatic Cancer (ESPAC) trials 1 and 3 are among the largest adjuvant clinical studies conducted for this disease worldwide [8, 9]. These studies have questioned the role of chemoradiotherapy post resection and have established adjuvant gemcitabine or 5-fluorouracil (5-FU) as the preferred and standard of care regimens. Based on previously reported data showing hENT1 to play role in the transportation of gemcitabine within the cells and affecting finally its efficacy (Figure 1), Neoptolemos et al. studied the expression of this gene in samples available from the prospective ESPAC 1 and 3 studies. Tissues microarrays (TMAs) technique on paraffin blocks from resected tumors was performed and staining of hENT1 by using the murine 10D7G2 anti-hENT1 antibody was assessed. The tumors’ hENT1 expression was graded as high if H-score was above 48 or low if H-score was below 48. Patients treated with gemcitabine having a high hENT1 H-score showed a better overall survival (26.2 months) compared to those with low hENT1 (17.1 months), whereas overall survival in those treated with 5-FU was above 20 months with no statistical difference noted in either expression group (Table 1). The independent predictive value of hENT1 was confirmed on a multivariate analysis. Therefore, the authors concluded that hENT1 levels should be assessed and used in the clinical setting and guide our adjuvant choice. We have to emphasize the importance of using validated and tested molecular means and antibodies as used in the clinical trials, as there is always risk of misinterpretation in cases other less well studied antibodies are utilized, a fact particularly highlighted in the discussion following the presentation of this abstract. 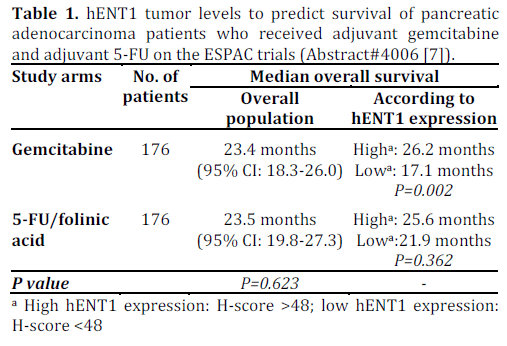 The role of the secreted protein acidic and rich in cysteine (SPARC) expression in pancreatic cancer stroma had been suggested in previous oncological meetings and published works. This calcium and albumin binding protein plays role in cell migration, cell adhesion in the extracellular matrix and angiogenesis. In addition, when an albumin bound drug (e.g., nab-paclitaxel) pass through the endothelial wall of a vessel by pinocytosis before ingoing the interstitial space, SPARC is attached to the albumin-drug complex and prevents from entering the cancer cells. As the results on SPARC role were mainly retrospective or based on preclinical evidence, there has been no impact in clinical practice. Researchers involved in the prospective randomized phase III CONKO-001 adjuvant study (gemcitabine versus observation) assessed expression of SPARC by immunohistochemistry in peritumoral stroma but also in the tumor cells cytoplasm and correlated with disease free and overall survival. Tumors were grouped as having strong or not strong stroma SPARC expression and high or low cytoplasmic expression. The authors performed univariate and multivariate analysis and reported a significant increase of disease free survival and overall survival in SPARC low or not strong patients group treated with gemcitabine versus those having high or strong SPARC expression (Table 2). These effects were not seen in the observational group regardless of SPARC expression. Therefore, SPARC seems to plays a significant predictive role in patients treated with adjuvant gemcitabine chemotherapy.

A very promising approach towards improving efficacy of current treatment options is the choice of treatment based on individual’s pharmacogenomic profile. Researchers from Memorial Sloan Kettering Cancer Center, studied pancreatic cancer patients for gene expression profiling and chemosensitivity of their circulating and invasive tumor cells (CITC). In particularly, 10 mL peripheral blood was obtained prospectively from patients prior to first line and second line cytotoxic chemotherapy, CTICs were collected and enriched using disposable kits (Vita-Cap®, Vitatex Inc., Stony Brook, NY, USA) and mRNA was finally isolated. Thereafter, gene expression profiling was performed and correlated with pharmacogenomic data regarding chemosensitivity, obtained from the pancreatic cancer cell lines NCI-60, and with clinical data of response. In this pioneer work, the authors reported that specific gene expression differences were identified between responders and non-responders as well as between short and long survivors. Patients predicted to have a favorable chemosensitivity profile showed a improved time to progression (TTP) of 7.3 months versus 3.7 months of the non favorable ones (P=0.017, HR=0.30). Further information obtained from this work was the identification of poor prognostic factors (such as the E2F1 and NF-kappa B pathways) or factors associated with disease progression (PLC and RB1). The authors concluded that performing pharmacogenomic studies in the clinical arena is feasible and also demonstrated new ways of identifying pathways of resistance or prognosis.

It is clear that there are unmet needs in the management of pancreatic cancer patients. The development of new drugs is rather problematic in a disease that is not easily targetable. Therefore, we have to explore deeper those small minorities of patients who have shown clinical benefits in the so far tested agents. We know from our clinical practice and from shared international experience that some patients do particularly well for unknown reasons, but surely for some reason. Pharmacogenomics might seed light and give answers in these questions. Years after the completion of the ESPAC studies, it seems that there is a pharmacogenomic biomarker, hENT1, that may further identify the patients most likely to benefit from adjuvant gemcitabine or 5-fluorouracil. The test seems rather simple and straightforward. It might need a further confirmation and validation in one of the other phase III adjuvant studies (e.g., Charité Onkologie CONCO-001), using same antibodies and techniques and after that it is upon the regulatory bodies to set the standards and give the green light for use in clinical practice. Though, financial issues always arise the benefit for patients and health systems from such predictive biomarkers are always greater (as the K-ras for colon cancer and epidermal growth factor receptor (EGFR) for lung or human epidermal growth factor receptor 2 (HER2) for breast story have shown).

In contrast, the data of SPARC as a predictive biomarker of gemcitabine are premature since we need to clarify whether cytoplasmic or stroma expression of SPARC is what matters most, how and by which method we should test it and then we need validate this method. Previous studies have also demonstrated that SPARC mRNA expression might have prognostic value and that also it might predict for nab-paclitaxel efficacy. Therefore, there are still few issues that need to be addressed before we conclude the exact prognostic and predictive role of SPARC. Thereafter, we will need more time to confirm the results prospectively in clinical trials. Regarding cytotoxic treatment selection based on gene expression profiling, the findings are quite intriguing but have to be considered still experimental. There are many hurdles in using the high throughput techniques namely the sensitivity and likelihood for errors, the lack of a specific target and the “fishing” like approach, absence of consensus on the ideal platforms, the costs and finally the limitation of testing in very few laboratories or academic only institutions.

Nevertheless, it opens horizons and creates many opportunities for research in a devastating disease.

Fortunately, as a result of translational research booming, we have well preserved and stored biological materials and this is for patients to thank and congratulate, as future generations will benefit from the ongoing research. As there is no time or resources to waste anymore, the various academic centers worldwide need to collaborate in order to produce reliable and validated data in order to help those who needed it, as soon as possible.

2. There are no robust data yet to support use of hENT1 as predictive biomarker in advanced disease outside clinical trials.

3. hENT1 expression should be assessed with validated antibodies (murine 10D7G2) as there is risk of results misinterpretation.

5. There are no data regarding SPARC predictive role in advanced disease treated with gemcitabine, as opposed to treatment with nab-paclitaxel.