Poor Compliance with ACG Guidelines for Nutrition and Antibiotics in the Management of Acute Pancreatitis: A North American Survey of Gastrointestinal Specialists and Primary Care Physicians

Acute pancreatitis remains a significant problem in the United States, with an estimated 210,000 admissions for acute pancreatitis each year, with evidence to suggest a global trend toward an increasing incidence of disease [1, 2]. Multiple studies over the past decade have updated the treatment of acute pancreatitis with regards to nutrition and antibiotics which are reflected in the 2006 American College of Gastroenterology (ACG) practice guidelines [3].

While it is well documented that compliance to guidelines is suboptimal in other countries, no studies to date have directly examined how well physicians in North America are following guidelines in the treatment of acute pancreatitis [13, 14, 15, 16]. The objective of this study is to assess physician adherence to current practice guidelines with regards to antibiotics and nutrition in the management of acute pancreatitis in North America.

A 20 question survey was created, addressing physician attitudes toward the use of nutrition and antibiotics in acute pancreatitis (Appendix). Representatives from Stony Brook (including medical residents and gastroenterology fellows) distributed the survey to physicians in person at multiple North American regional and national internal medicine and gastroenterology conferences between 2009 and 2010: 2009 New York Society for Gastrointestinal Endoscopy Post Graduate Course in New York, NY, USA (636 physician attendees); 2009 American College of Gastroenterology in San Diego, CA, USA (4,103 total participants, 3,487 physician attendees); 2010 Digestive Diseases Week in New Orleans, LA, USA (13,000 total attendees); 2010 American College of Physicians Annual Internal Medicine Meeting in Toronto, Ontario, Canada (7,925 total participants, 6,026 physician attendees). Surveys were distributed outside conference lecture halls for 8 hours a day during the first 3 days of each conference. The surveys were distributed at random, and survey responses were made anonymously; surveys were collected immediately after completion [17]. At the conclusion of each conference, survey responses were entered in a centralized database.

The survey was distributed to 462 physicians, a total of 451 completed surveys was returned, with a response rate of 97.6%. Thirty-seven surveys were excluded due to missing demographic data, yielding a total of 414 surveys for inclusion in this study (89.6% of the distributed surveys). There was a relatively even distribution with regards to age and years from training (Table 1). Of the survey respondents, 171 (41.3%) were gastroenterologists and the remaining 243 (58.7%) were primary care physicians. Respondents practiced in a variety of clinical settings, including community hospitals (n=169; 40.8%), universityaffiliated hospitals (n=139, 33.6%), and university/ tertiary care centers (n=106, 25.6%). Respondents identified themselves as having a full-time academic practice (n=121; 29.2%), a hybrid private/academic practice (n=130; 31.4%), or a full-time private practice (n=163; 39.4%). 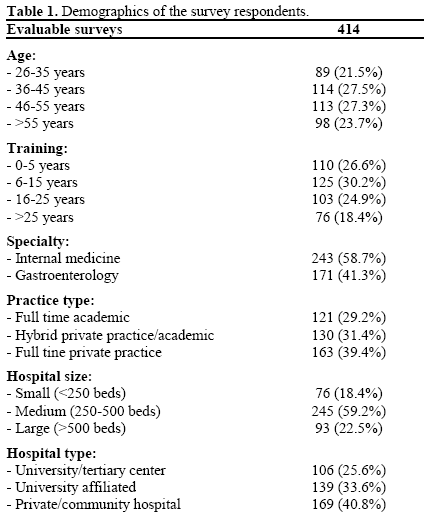 This study was granted exemption from review by the Stony Brook University Medical Center Institutional Review Board. Informed oral consent was obtained from each respondent. No incentives were provided to the study participants.

Surveys without complete demographic data were completely excluded from the analysis. Blank responses to individual questions were excluded from the analysis of that question; no imputations were made for missing data. The chi-square test was used to assess the association between demographic variables and survey responses. Univariate and multivariate logistic regression analysis was used to determine which demographic variables were independently associated with route of nutrition (NJ tube versus TPN/PPN; NG tube and other route were excluded from these analyses). The simple contrast was applied to all variables in the logistic regression analysis in order to calculate odds ratios (ORs) together with their 95% confidence intervals. Statistical analysis was performed using Stata v9.0 (Stata Corp, College Station, TX, USA). A two-tailed P value less than 0.05 was considered statistically significant.

When asked which route of artificial nutrition was most often utilized in the management of acute pancreatitis data were available in 406 surveys (98.1% of evaluable surveys). In particular, 43.1% (n=175) of respondents used TPN/PPN and 36.5% (n=148) chose NJ tube feeding (Table 2). The preferred route of administration was significantly (P<0.001) related to the practice type: academic physicians (52.1%, 61/117) were more likely to utilize NJ tubes compared to private practitioners (19.9%, 32/161), whereas private practice physicians (70.2%, 113/161) were more likely to use TPN/PPN than academic physicians (20.5%, 24/117). When comparing gastroenterologists to primary care physicians, both groups favored parenteral nutrition over NJ tube feeding (P=0.151).

Table 3 shows the results of univariate and multivariate analyses made in order to determine which factors were associated with the use of NJ feedings over TPN/PPN. Five demographic factors were associated with route of nutrition at univariate logistic regression analysis: age, years from training, hospital size, hospital type, and practice type. Using a multivariate logistic regression model, practice type (P<0.001) was confirmed as an independent predictor of the preferred route of nutrition chosen by a given practitioner. In particular, private practice physicians were more likely to utilize TPN/PPN, whereas academic physicians typically used NJ tube feeding when initiating artificial nutrition in acute pancreatitis. As far as the other predictors were concerned, age, training, and hospital type lost their role while hospital size had an overall significant P value in the multivariate model, but it is hazardous to consider this an independent predictive variable for the utilization of NJ feeds because there was no trend amongst the different hospital size categories, as well as both ORs values were not significant. Figure 1. Reasons why TPN/PPN is initiated in the management of acute pancreatitis over enteral nutrition. The 411 available respondents could chose more than one answer and a total of 556 responses were collected. Percentages are computed within the number of respondents. The BSG guidelines recognize the lack of consensus regarding antibiotic use [19], and the IAP guidelines suggest that antibiotics may not improve survival [18]. These recommendations reflect the heterogeneity of the underlying clinical data, with different studies demonstrating varying benefits of antibiotics.

Recognizing the variability among these practice guidelines, this study assessed physician compliance from physicians attending the specifically mentioned North American medical conferences. Acute pancreatitis is typically treated with supportive care including aggressive fluid hydration, pain control, and controlled re-initiation of oral intake. Typically, a diet is reintroduced as the patient’s appetite returns and abdominal pain subsides. In order to minimize complications from malnutrition, nutritional support is indicated for patients with protracted symptoms beyond 5-7 days. TPN had historically been favored as the primary means of nutritional support in severe acute pancreatitis because it minimized enteral stimulation, allowing for suppression of pancreatic activity. However, studies in recent years have shown TPN to be associated with potential harms including an increased risk of electrolyte disturbances as well as local and systemic infection [22]. On the other hand, enteral nutrition minimizes the risk of bacterial translocation by preventing intestinal atrophy and improving gut barrier function [23]. Clinical trials have demonstrated that jejunal feeding does not exacerbate the disease process, and that concordantly, enteral nutrition has been associated with improved outcomes with a decreased rate of infection, length of hospital stay, and decreased cost of care [24, 25, 26].

Despite the clinical evidence and multiple practice guidelines, our study found no significant difference in the number of responders who chose NJ tube feeding (37%) compared to those who chose TPN/PPN (43%) for nutrition support in acute pancreatitis. A multivariable regression model demonstrated that practice type was the only independent predictor of the preferred route of nutrition; with academic physicians favoring enteral nutrition as compared to private practice physicians who favor TPN. Interestingly, gastroenterologists demonstrated a similar level of noncompliance with the guidelines as primary care physicians with both groups choosing TPN over enteral nutrition. Respondents cited ease of access to TPN (38%) and perceived need for bowel rest (37%) as reasons to select TPN over enteral nutrition.

It seems reasonable that academic physicians in North America would be more compliant with current practice guidelines. Understanding of up-to-date and high quality guidelines is a critical part of training programs; given the paradigm shift from TPN to enteral nutrition occurred in recent years, physicians who are not actively involved in maintaining an awareness of current guidelines may not be aware of the updated approach to nutrition in acute pancreatitis. Academic physicians are potentially more apt to be aware of current literature as compared to private physicians because of their heavy involvement with clinical training programs. The perceived need for bowel rest as a rationale for TPN further highlights the lack of awareness of current literature amongst physicians. Based on survey responses, however, the problem may not lie in knowledge but in the availability and accessibility of resources. Ease of access to TPN is an important consideration; establishing jejunal access has historically been quite challenging, requiring either specialized endoscopic techniques or interventional radiology. These services may not be readily available to private practice physicians, particularly those working in the community hospital setting. On the contrary, most hospitals have TPN services readily available. Increasing familiarity with and the availability of newer technologies such as self-advancing nasojejunal tubes or through-the-scope nasojejunal tubes may make jejunal access more feasible in the community hospital setting.

The limitations of this study are those inherent in any survey study. Handing out surveys in person, however, ensured a high response rate (98%) as 462 surveys were distributed and 451 surveys were completed. While there were over 25,000 total attendees at all conferences where the survey was distributed, this study had no affiliation to the societies sponsoring each conference, and thus infeasible to ensure survey distribution to all conference attendees. We recognize also that a selection bias may have been introduced in this method of survey distribution. However, the even distribution in responder demographics based on age, practice type, specialty, and academic affiliation suggests that the sample was indeed random. Additionally, we assumed that the survey responses are reflective of actual practice patterns, but there may have been a tendency for physicians to provide the “correct” responses as opposed to responses that reflect their clinical practice. Since the respondents were attendees at regional conferences, they may also have been more aware of current guidelines, especially if they attended recent lectures on acute pancreatitis. That being said, however, our data demonstrates a tendency towards guideline non-compliance. It therefore seems reasonable to suspect that responses of the general population would be even more skewed towards noncompliance than those from conference attendees. We recognize that many of the attendees at these conferences may not have been from North America therefore including a question asking the region of clinical practice of our respondents would have been useful in our survey demographics. Although there are many potential questions to be addressed regarding the management of acute pancreatitis, this study focused on nutrition and antibiotics for brevity purposes.

In conclusion, most physicians are not compliant with the 2006 ACG guidelines regarding the use of artificial nutrition in the management of acute pancreatitis. Most physicians were found to favor parenteral nutrition over enteral nutrition, although academic physicians correctly utilize enteral feedings (via nasojejunal tube) over TPN/PPN. Although antibiotics are infrequently being used in acute pancreatitis, they are being initiated for inappropriate indications such as fever and infection prophylaxis. It is difficult to assess compliance with guidelines for antibiotics in severe acute pancreatitis, given conflicting recommendations from various societies. Greater consistency among guideline recommendations and improved adherence to such guidelines promise to improve outcomes of patients with acute pancreatitis through reductions in associated morbidity and mortality.

Financial support and conflicts of interest

No grants or institutional financial support contributed to the research conducted from this study. No potential conflicts of interest exist in any part contributing to this manuscript including study design, data collection and analysis, and manuscript preparation.