Portal Annular Pancreas. A Rare Variant and a New Classification

A 51-year-old male presented with painless jaundice, generalized pruritus and loss of weight of 3 months duration. He was icteric. Abdominal examination revealed an enlarged liver with a palpable gallbladder. A liver function test showed conjugated hyperbilirubinemia. A chest X-ray was normal. A CT scan revealed bilateral intrahepatic biliary dilatation and a dilated main pancreatic duct. A side view gastroduodenoscopy showed an ulcerative lesion in the ampulla of Vater; the histological report was moderately differentiated adenocarcinoma. 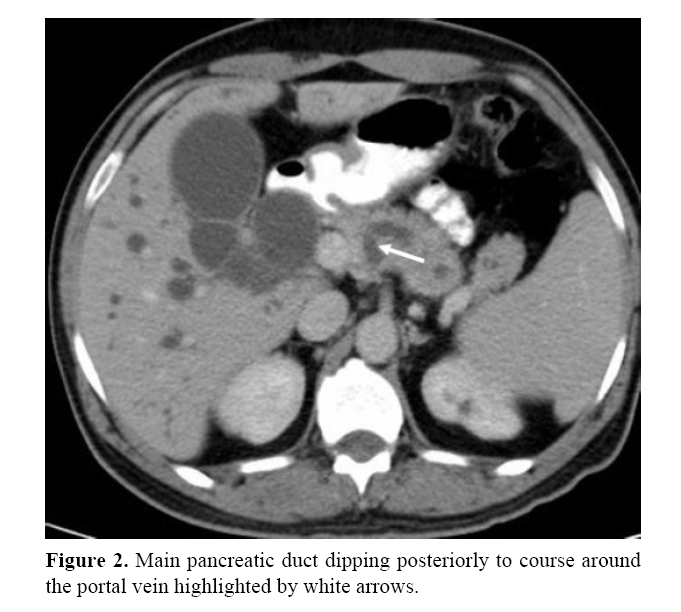 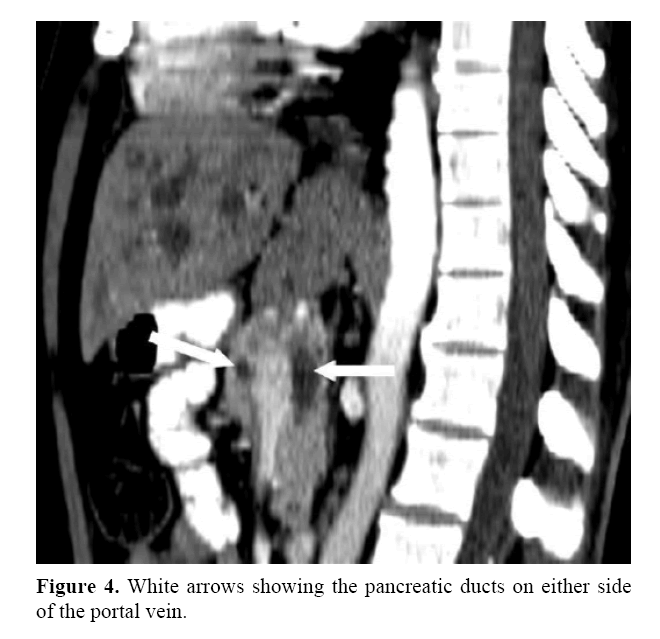 Figure 4. White arrows showing the pancreatic ducts on either side of the portal vein.

During fetal development, the ventral pancreas rotates initially to the right (6 mm embryo stage) and then to the left about the axis of the primitive gut to fuse posteriorly with the dorsal pancreas (7 mm embryo stage). In rare instances, this fusion occurs to the left of the mesenteric/portal vein, thus encircling the portal vein. It is more common in the swine pancreas while it is rare in human beings [1]. An incidence of 1.14% has been reported by Karasaki et al., based on an institutional review of CT scans [2].

Portal annular pancreas may therefore be classified as type I when the ventral bud of the pancreas fuses with the body and ductal system of the pancreas posterior to the portal vein, type II when type I is associated with pancreas divisum (as it was in our patient) and type III when the uncinate process alone is involved in the encasement of the vessels and fusion. Each may be further divided into a, b and c (suprasplenic, infra- splenic and mixed) depending on its relationship to the splenic vein [2] (Figure 5). A CT scan is adequate for diagnosing this anomaly. In cases where the main pancreatic duct is not visible posterior to the portal vein, it can be diagnosed by demonstrating “continuity” of the extension of the uncinate process into the body of the pancreas in more than two slices on CT scan [2] (Table 1). Figure 5. Schematic representation of the types of portal annular pancreas.

Recognition of this anomaly pre-operatively will help avoid technical problems at the time of surgery.