Post endoscopic retrograde cholangiopancreatography (ERCP) pancreatitis (PEP) is the most frequent complication following ERCP, occurring in approximately 3.5% of unselected cases, with a 1-10% rate in average risk patients, but 25-30% in high-risk patients, such as those with suspected sphincter of Oddi dysfunction (SOD) [1]. PEP is classified as severe in 11% of cases, which has a recognised morbidity and mortality [2].

Rectal non-steroidal anti-inflammatory drugs (NSAIDs) have been shown to reduce the incidence, as well as the severity, of PEP, even in high-risk patients [3, 4, 5]. The most recent European Guidelines advise that rectal NSAIDs are used before or immediately after ERCP in all patients without contraindications [6].

Prior to the rectal NSAIDs era, pancreatic duct (PD) stenting was a well-established method of reducing PEP, especially in high-risk patients. Randomised controlled trials showed that prophylactic PD stenting reduced the incidence of PEP by up to 70% [7, 8]. This trend has also been confirmed in a recent meta-analysis that showed that patients who had prophylactic PD stenting had a significantly lower incidence of PEP than groups without PD stents (OR=0.35, 95% CI 0.25-0.49) [9]. However, if PD stenting is attempted, but fails, the rate of PEP increases significantly to 35-66% in high-risk patients [9, 10]. Therefore, the 2016 ESGE guideline on papillary cannulation and sphincterotomy state that prophylactic PD stenting should only be performed by experienced endoscopists [11]. Interestingly, patients with failed PD stent insertion who received rectal NSAIDs may have lower rates of PEP, reported as only 5.3% in one study [5]. Larger studies including patients who had failed pancreatic ducts stenting but had received rectal NSAIDs are required to confirm these findings. Therefore, we retrospectively assessed a large dataset including the failed PD stent group in a period where all patients without a contraindication received rectal NSAIDs.

This was a retrospective cohort study conducted at University College London Hospital (UCLH), in London, a tertiary referral centre for ERCP.

Cases were identified from our prospectively collected ERCP database. In addition, endoscopy (GI reporting tool, Unisoft medical systems, UK), imaging (PACS: picture archiving and communication system, GE Healthcare, USA), and electronic patient record databases were searched for procedure and patient outcome information. Patients referred from other hospitals were contacted by telephone maximally twice and if we were unable to contact them, they were assumed as lost to follow-up.

Informed written consent for each procedure was obtained, and included consent for rectal NSAIDs (Indomethacin or Diclofenac 100 mg rectally directly at end of the procedure) in all patients without contraindications. All ERCPs were performed by one of four experienced endoscopists using a standard duodenoscope (JFV or TJFV; Olympus KeyMed, Southend-on-Sea, UK) or Pentax scope ED34-i10T video duodenal scope. All patients were observed for 4 hours in the recovery area prior to discharge. Those with significant co-morbidity or who became symptomatic following the procedure were admitted to hospital for further observation and management as needed. Patients were discharged with written instruction concerning contacting the unit in the event of new symptoms suggestive of postprocedure complications.

Prophylactic PD stenting was attempted in those patients with predicted high risk of PEP (e.g. suspected sphincter of Oddi dysfunction, multiple pancreatic duct cannulation). Therapeutic PD stents were inserted in patients undergoing pancreatic endotherapy. Failed PD stenting was defined as attempt to stent but failure to actually deploy, which is a recorded field in our prospective ERCP data sheet. Single pigtail unflanged 5Fr 5-7 cm stents were used for prophylaxis (Cook Medical Inc, Bloomington, IN, USA). The type of therapeutic pancreatic stent used was chosen at the discretion of the endoscopist, but were 5-7Fr, 3-9 cm (Cook Medical Inc).

Post ERCP pancreatitis (PEP) was defined as new or worsened abdominal pain, in association with a serum concentration of pancreatic enzymes (amylase or lipase) that was at least three times the upper limit of normal at more than 24 hours after the procedure, requiring hospital admission or a prolongation of planned admission [12].

Patient Demographics and Indications for ERCP

A total of 1633 ERCP procedures were performed during the 30 month study period (Figure 1). The mean (SD) age was 60 years (±18). Indications for ERCP included the management of biliary stones (46%), assessment and treatment of a biliary stricture (25%), and SOD (manometry +/- sphincterotomy) (6%). The remaining 25% consisted of a heterogeneous group (e.g. stent removal/change, biliary leak) (Table 1). 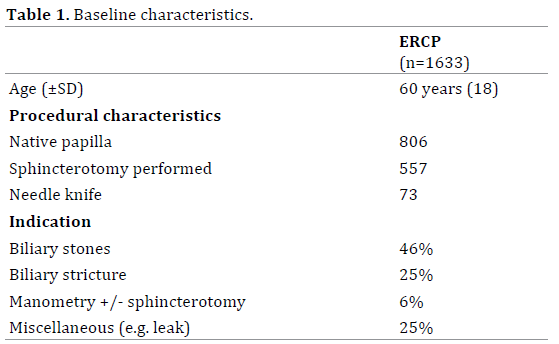 In a sub-group of patients, 8 patients (3.8%), who had contra-indications to NSAIDs and had successful prophylactic PD stent no PEP was reported.

In patients at high risk of PEP, historical studies estimate the risk of PEP to be as high as 30-40% [12, 13, 14]. In a seminal study of ERCP in patients with suspected SOD, Tanarsky et al. showed that PD stent placement reduced the risk of PEP from 26% to 7% [10]. An important observation of studies of PD stenting is that whilst high rates of successful stent placement have been reported from specialist centres (>96%), attempted, but failed, stenting is associated with markedly increased rates of PEP (>60%), with an increased risk of a severe course [15, 16]. In the present study of a large single-centre cohort of patients, the rate of PEP in patients receiving PD stenting (with a predicted high risk of PEP) was 9%, a level expected on the basis of previous studies. The interesting observation was that the rate of PEP in those in whom PD stenting failed was only 8%. In addition, the only patient in this group who developed PEP following failed PD stent insertion had a contra-indication to NSAIDs. Our study supports the findings of Choksi et al. who reported that in those patients in whom PD stenting was unsuccessful, 35% developed PEP, but when rectal NSAIDs were given the rate of PEP was only 5% [5]. It therefore seems likely that routine rectal NSAIDs use attenuates the risk of PEP, perhaps to the extent that this negates the need for prophylactic PD stenting (as suggested by an apparent lack of increase in PEP in the setting of failed PD stenting).

The question remains as to whether the routine use of rectal NSAIDs alone renders PD stenting an unnecessary additional intervention in reducing the incidence of PEP. Recently, the combination of rectal NSAIDs and stents has not been shown to be superior to either approach alone [1]. Although in our study 9% of patients receiving prophylactic PD stenting and NSAIDs developed PEP, compared to 1.4% who received only NSAIDS, this is likely to be explained by the endoscopists’ pre- or peri-procedure assessment of the patients as being at high risk of PEP, leading to a decision to attempt PD stenting. However, it is not possible to categorically conclude from our study whether the increased relative risk of PEP in those patients undergoing attempted PD stenting (RR 6.6 (p≤0.001)), compared to the unstented group, was due to inherent risk of PEP in those selected for stenting, or as a result of attempted stenting per se. In a recent retrospective study from China (623 patients in the period 2008- 2014), the authors concluded that prophylactic PD stents may be a superior method in preventing PEP when compared to NSAIDs [17]. Interestingly though, rectal NSAIDs were only given in high-risk cases at the discretion of the surgeon/ endoscopist and when given, they were not immediately given after ERCP. The latter is relevant as a recent analysis of randomised controlled trials showed that PEP was reduced especially in the group where rectal NSAIDs were given before ERCP [18]. Surprisingly, a recently published randomized controlled trial did not show reduced PEP risks in patients receiving rectal indomethacin [19]. An explanation could be that most of these patients (70%) were of average risk for PEP. Another explanation for the results could be the use of indomethacin as a metaanalysis of 11 randomised controlled trials showed no significant effect of Indomethacin on preventing PEP compared to other NSAIDs [18]. An awaited prospective randomised study of rectal NSAIDs versus rectal NSAIDs and PD stenting in patients at high risk of PEP may help to resolve this important clinical question [20] .

Limitations of this study include the fact that the data was collected retrospectively; 7% of patients did not receive NSAIDS, despite the absence of recorded contraindication; and 7.6% patients were lost to followup in the unstented group compared to 3% in the stented group. Also, as PD stent insertion was left to the discretion of the endoscopist, eg. to assist biliary cannulation, this was likely a source of bias as to which patients were stented by the 4 experienced endoscopists doing the procedures. Lastly, we showed that unfortunately 108/214 patients who didn’t receive rectal NSAIDs didn’t seem to have had an apparent reason for this, which we have used in an audit to optimise rectal NSAIDs implementation.

In this large single centre cohort study of patients undergoing ERCP, in whom prophylactic NSAIDs were given as standard, no difference in rates of PEP were seen in those high risk patients who underwent successful PD stenting, compared to those in whom PD stenting was attempted, but failed. Despite the retrospective character of this study with limitations as outlined above, our findings do support emerging data that the benefit of NSAIDS may negate or reduce the necessity of PD stenting to reduce the risk of PEP.