Here we report four cases of pulmonary thromboembolism in acute pancreatitis on the top of chronic pancreatitis. We found that all the patients had pancreatic ascites, its association with pulmonary embolism has been reported only in two patients in the literature up to our knowledge [3].

A forty-six-year-old male presented with a history of moderate epigastric pain since 1 month, increased in severity since last 10 days. He developed distention of abdomen after 1 week but without jaundice and pedal edema. He started developing dyspnea on exertion and coughing in last 15 days without any chest pain. Patient was alcoholic, consumed country alcohol around 120 grams per day since 20 years and chronic tobacco chewer. Heart rate was 88/min, Blood pressure was 130/80 mmHg and no hypoxia on arterial blood gas analysis. Abdominal examination showed epigastric tenderness with presence of ascites. Liver function tests were normal with amylase of 356 IU/L (15-100 IU/L) and lipase of 560 IU/L (0-60 IU/L). On diagnostic paracentesis, there were 1100 white cells/ mm3 (80% lymphocytes), 4.3 g/dL proteins and serum albumin ascites gradient (SAAG) of 0.6. Ascitic fluid amylase was 5401 IU/L. Contrast Enhanced Computed Tomography (CECT) scan of abdomen was showing atrophic pancreas with parenchymal calcification, peripancreatic fat stranding, 3 mm pancreatic duct and multiple intraductal calculi along with ascites (Figure 1). Two Dimensional Echocardiogram (2D Echo) and Electrocardiogram (ECG) were normal. Acute thrombosis of lobar and segmental branches of bilateral pulmonary arteries was noted in CT angiography with wedge shaped bands in both lung bases consistent with lung infarcts (Figure 2). His lower limb and abdominal vessel doppler were not suggestive of any thrombus. 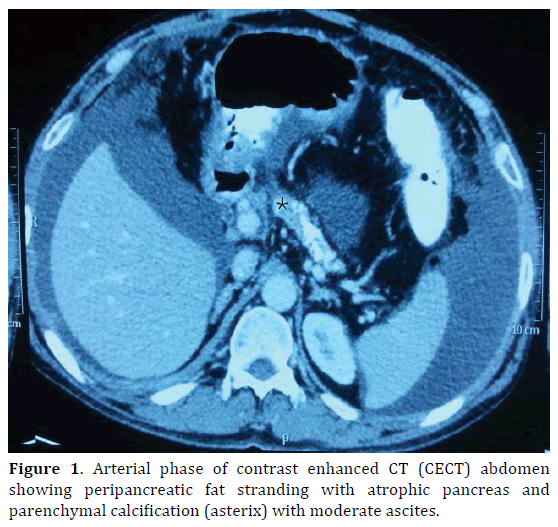 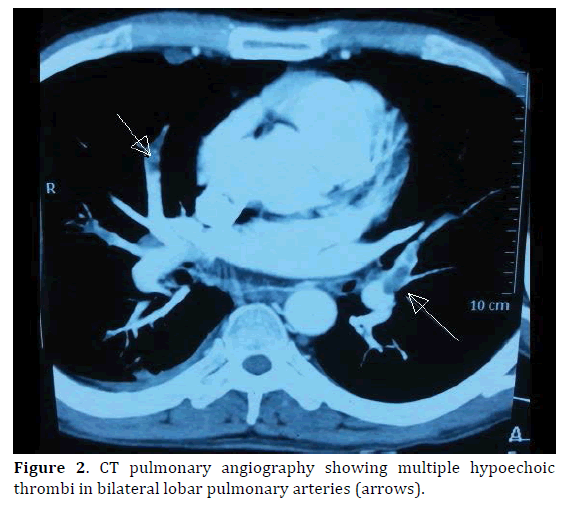 Subcutaneous heparin was started along with analgesics and fluids. Pancreaticogram demonstrated a leak in the neck of pancreas and pancreatic duct stenting was done for the same. Ascites improved after few days. Patient shifted on oral anticoagulation and discharged at day 15.

A thirty-year-old male, chronic alcoholic admitted to emergency department with complains of severe epigastric pain since 1 month, which was continuous, boring, radiating to back. He developed generalised abdominal distention after 5 days. He developed dyspnea on exertion before 1 week. He had similar type of severe abdominal pain before 1 year and 3 months, each time requiring hospital admission. He had multiple episodes of mild to moderate intermittent epigastric pain in 1 year, for which he used to take oral analgesics. He was alcoholic taking around 100 grams of country liquor daily since 8 years. Heart rate was 100/ minute and blood pressure was 120/70 mmHg at admission. Tachypnea was present with a rate of 25/minute but without hypoxia. Per abdomen was tender with severe ascites. Decreased air entry in both lower zones was noted on respiratory examination. Hemogram, liver enzymes and renal function tests were normal. Amylase was elevated (718 IU/L), so as lipase (400 IU/L). Diagnostic paracentesis was done, showing 135 cells, 85% neutrophils. Fluid proteins were 4.1 g/dL and amylase was 9290 IU/L. Atrophic pancreas with a leak in pancreatic duct in the body, peripancreatic edema and fat stranding were found on CECT abdomen along with ascitis. ECG had sinus tachycardia. Moderate pulmonary arterial hypertension (PAH) with dilated right atrium and ventricle were noted on 2D echo. CT pulmonary angiography (CTPA) suggested bilateral distal pulmonary artery thrombosis, extending into ascending, descending and segmental arteries (Figure 3). However, lower limb doppler was normal. He was started on subcutaneous heparin and warfarin along with fluids and analgesics support. Patient improved after 15 days with conservative management.

Patient was put on intravenous fluids, antibiotics and subcutaneous heparin. Symptoms decreased within a few days and patient was discharged on oral anticoagulation after 22 days. 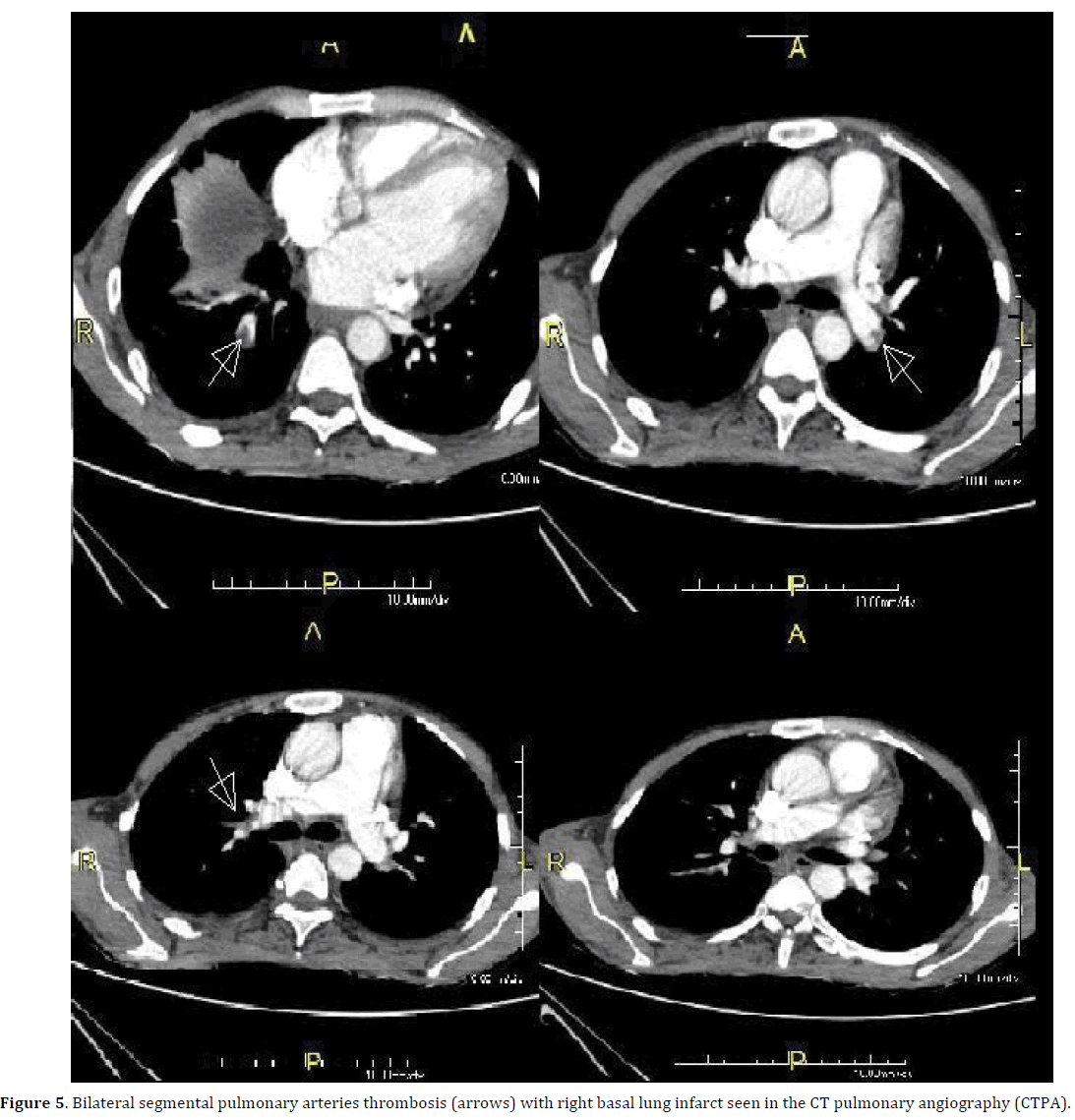 The mechanism of venous thrombosis in acute pancreatitis is often multifactorial. First and the most frequently described mechanism is the inflammatory response associated with acute pancreatitis leading to a prothrombotic state, which makes vascular events more likely. Second, involvement of the vein by surrounding edema and cellular infiltration may cause venous thrombosis [7-9]. Third, compression of the vein by a psuedocyst or enlarged pancreatic parenchyma in turn precipitates vascular event [10]. Fourth, even a rupture of cyst into a vein also precipitates thrombosis [6]. At microvascular level, the mechanism of vascular injury may be due to intrinsic endothelial damage due to inflammatory mediators [11]. Involvement of veins in vascular thrombosis is variable. Portal vein, splenic vein and superior mesenteric vein are the most commonly involved vessels [12, 13]. Other vessels involvement have also been reported (Table 1) [15]. 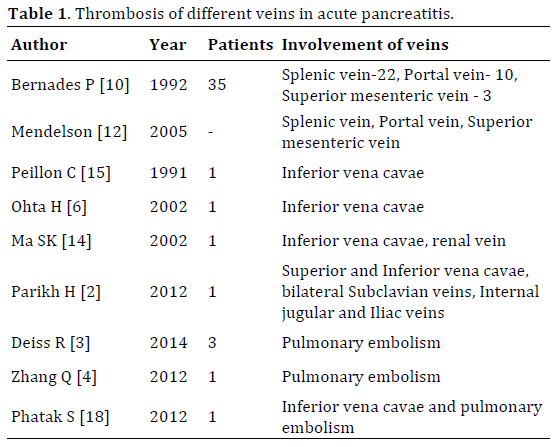 Among four cases reported in present series, all the patients were having acute pancreatitis superimposed on chronic pancreatitis. Etiology of chronic pancreatitis was alcohol in all of them. Predominant symptoms were abdominal pain (100%) and distention of abdomen (100%). All patients were symptomatic for pulmonary embolism, while in the series reported by Deiss et al. 2 out of 3 patients were found to have embolism incidentally [3]. Two patients (50%) had deep vein thrombosis, the presumed source for pulmonary embolism. One had left anterior tibial vein thrombosis while the other had left popliteal vein thrombosis. Rest of the patients did not have any deep vein or splanchnic vein thrombosis. However, causative vein thrombus is found only in nearly 50% cases of PTE. This is similar to our observation in the present series. Intrinsic endothelial damage may have played a role for vascular event in these cases.