Radiofrequency Ablation of the Pancreas. I: Definition of Optimal Thermal Kinetic Parameters and the Effect of Simulated Portal Venous Circulation in an Ex-Vivo Porcine Model

Context Radiofrequency ablation of pancreatic tumours carries a risk of injury to important structures such as the bile duct and duodenum. We have recently developed an ex-vivo model of radiofrequency ablation of the porcine pancreas. Objective This study evaluates the effect of variations in probe temperature, duration of ablation and simulated portal venous flow on radiofrequency-induced injury. Specimen retrieval Pancreata of 30 6-monthold healthy pigs undergoing sacrifice in a commercial abattoir were used. Interventions Radiofrequency energy was applied to a pre-marked area of the pancreatic head. Pancreatic head biopsies were taken after ablation to incorporate duodenum, portal vein and bile duct respectively and frozen in liquid nitrogen. For each experiment a portion of the tail of the pancreas was studied as nonablated control. Paired slides using haematoxylin and eosin (H&E) and nicotinamide adenine dinucleotide (NADH) stains were prepared. Main outcome measures The effects of variation in target temperature (100°C to 80°C), duration of ablation and of simulated portal perfusion were studied. Results Optimal thermal kinetic characteristics were produced by a target temperature of 90°C applied for 5 minutes. At this temperature there was ablation of pancreas without injury to adjacent viscera. Higher temperatures resulted in injury to the bile duct and portal vein. Simulated portal circulation had no effect on ablation. Conclusions In this ex-vivo study radiofrequency produced a temperature and duration dependent ablation with the optimal characteristics being 90°C for 5 minutes.

Over the last decade radiofrequency energy has become increasingly accepted for the ablation of solid parenchymal tumours [1, 2, 3], in particular liver tumours [4, 5]. In contrast to the liver, where tumour-bearing tissue will be surrounded by normal hepatic parenchyma, the pancreas is surrounded by structures such as the duodenum and common bile duct and concerns regarding the risks for causation of thermal injury to these structures have limited the use of radiofrequency for non-resectable pancreas tumours. We recently reported the development of an ex-vivo model of radiofrequency ablation of the porcine pancreas [6]. In this model, thermal injury was recognizable by conventional histologic methods and was also characterized by loss of tissue oxidative enzyme activity measured as loss of nicotinamide adenine dinucleotide (NADH) activity [6].

Contemporary probe design permits the creation of a spherical area of ablation. The extent of ablation is influenced by the thermal efficiency and characteristics of the delivery system and also by factors intrinsic to the tissue such as impedance and the cooling effect (known as the ‘heat-sink’) of nearby visceral circulation.

The aim of this study is to explore the feasibility for modulation of radiofrequency ablation by variations in probe temperature and duration of ablation and further to examine the effect of simulated portal venous circulation in this ex-vivo porcine model.

This process is described in detail elsewhere [6]. In brief, 30 healthy 6-month-old pigs undergoing sacrifice in a commercial abattoir were used. The intact pancreas with visceral attachments was retrieved from a commercial abattoir within half an hour of the animal being sacrificed (no animals were sacrificed for the purpose of the study and tissues that were used were otherwise to be discarded). The specimen was brought immediately to the laboratory in a clean, non-sterile plastic container. No preservation was used. The specimen was placed on a metal tray attached to the earth plate of the radiofrequency (RF) applicator. A point of ablation was chosen in the head of pancreas (cranial pancreas) where it is closely attached to the duodenum. This point is equidistant (2 cm) from the inferior border of first part of duodenum and the common bile duct. The centre of ablation was marked with an indelible marker pen prior to insertion of the probe. The probe was inserted for 3 mm into the pancreas at the selected point and secured in place using an external Jclamp. A Starburst XL multi-array probe (RITA Systems Inc., Mountain View, CA, USA) bearing seven individual probe-tip thermal sensors was used for radiofrequency ablation. Probe arrays were deployed to achieve an ablation diameter of 2 cm. During application of radiofrequency energy voltage (power delivered and power used), impedance, and individual array-tip temperatures were continuously monitored. These parameters were displayed on a laptop computer screen during ablation and recorded in real-time mode.

After ablation, biopsies were taken from the ablated area including part of the duodenum, bile duct and portal vein. For each experiment a control biopsy of non-ablated pancreas was taken from the tail of the gland. Biopsies were immediately snap frozen in liquid nitrogen and stored at -70°C until specimen preparation. Paired haematoxylin and eosin (H&E) and nicotinamide adenine dinucleotide (NADH) stained specimens were prepared as described previously [6].

A haemofiltration machine (BSM-22 SC, Hospal, Medolla, Italy) was used to simulate portal circulation. The portal vein was identified cephalic to the pancreas and the superior mesenteric vein at the inferior border of the gland. All tributaries were carefully ligated with 2-0 vicryl (Ethicon, Edinburgh, UK) taking care not to narrow the lumen of the vein. The infra-pancreatic superior mesenteric vein was then intubated with plastic haemodialysis tubing which was ligated in place. The cephalic opening (portal vein) was similarly cannulated and the tube secured by ligature. The portal vein was then perfused using normal (non-buffered) saline at 37°C. A pulsed flow rate of 100 mL/min was maintained at a pressure of 100 mmHg.

a) Variation in Target Temperature

b) Variation in Duration of Ablation

Setting ablation diameter at 2-cm, target temperature at 90°C and duration of ablation at 10 minutes, the effect of simulated portal flow on ablation was examined.

There were two main outcomes for this study. First, the study aimed to define the optimum temperature and time for causing effective ablation in this model and to identify whether this optimum temperature/time combination was associated with evidence of injury to peri-pancreatic structures - principally the duodenum, bile duct and portal vein. Second, the study aimed to assess whether simulated portal circulation affected ablation.

All histologic preparations were examined by a histopathologist who was unaware of the intervention undertaken. All effects of ablation were assessed using loss of NADH activity. In previous studies, this group has demonstrated that this is a reliable and sensitive means of assessing ablation. Conventional haematoxylin and eosin preparations were also made of all slides as recognition of thermal injury to peripancreatic viscera was clearly seen, when present, in these slides.

The pancreata used in the study were retrieved from the animals sacrificed in commercial abattoir. No animals were sacrificed for the purpose of the study and tissues that were used were otherwise to be discarded. Therefore, ethics committee approval was not necessary.

Quantitative and semi-quantitative histological injury scores have been used to assess thermal injury by several groups (including this group) but can be criticized for categorisation of continuously variable parameters and are not reliably validated for assessment of thermal ablation of pancreatic and peri-pancreatic tissue. Accordingly, data are presented in a factual descriptive format: either the tissue in question was normal or there was evidence of injury on both H&E and NADH preparation. The extent of injury is not further quantitated.

Complete ablation of pancreatic parenchyma was noted at a target temperature of 100°C for 10 minutes. At this setting there was evidence of thermal injury to the common bile duct in one animal and similarly the portal vein in one animal. The normal appearances of the porcine bile duct are seen in Figure 1a (H&E) and an NADH preparation is seen in Figure 1b. Thermal injury to the bile duct was characterized by disaggregation of biliary epithelium with oedema of the subepithelial tissues on H&E staining (Figure 2a) and loss of oxidative enzyme activity in epithelial and subepithelial tissues on NADH staining (Figure 2b). 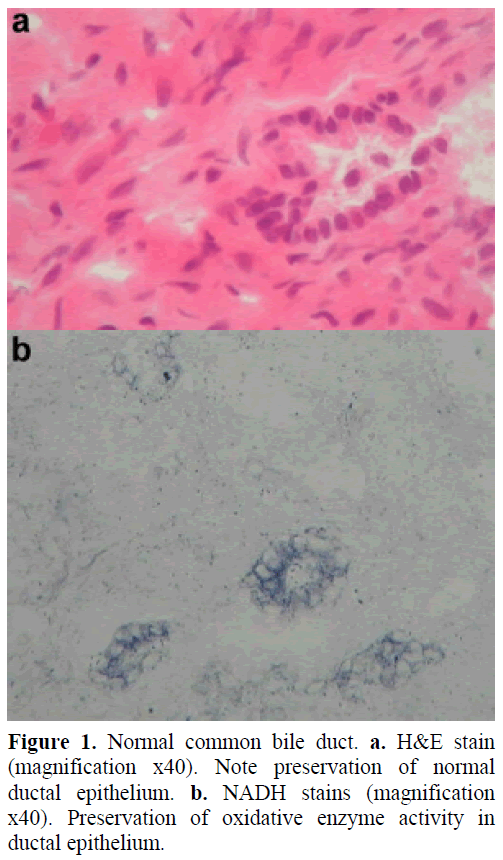 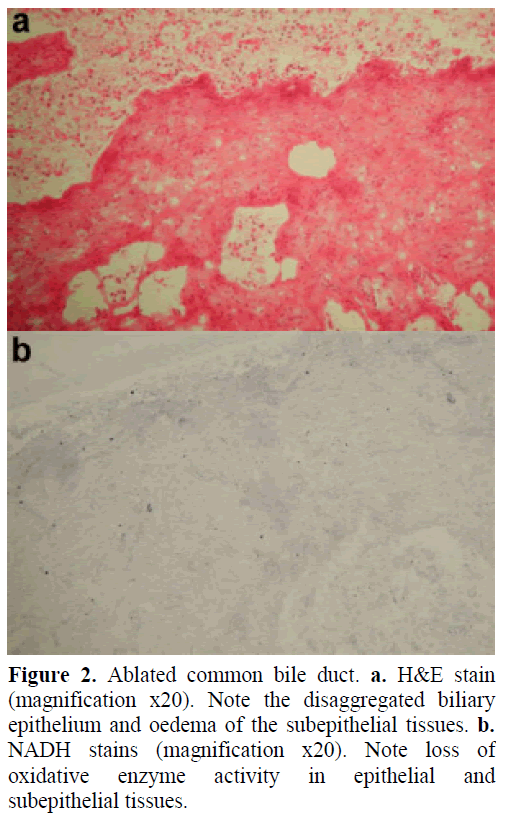 The normal appearances of the porcine portal vein are seen in Figures 3a (H&E) and 3b (NADH). Thermal injury to the portal vein was characterized by loss of endothelial lining and the presence of oedema in the muscle layer on H&E staining (Figure 4a) and loss of oxidative enzyme activity in the endothelial layer along with patchy preservation of smooth muscle on NADH staining (Figure 4b). 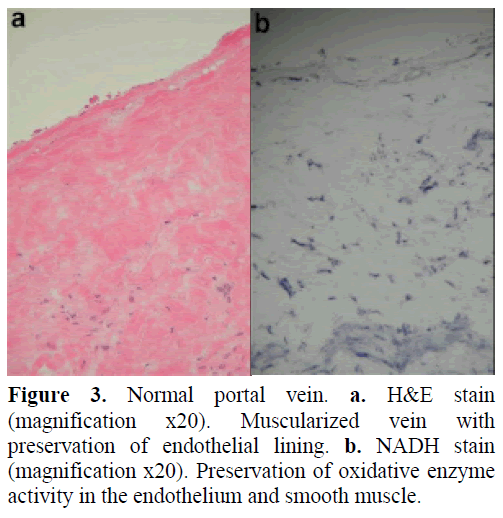 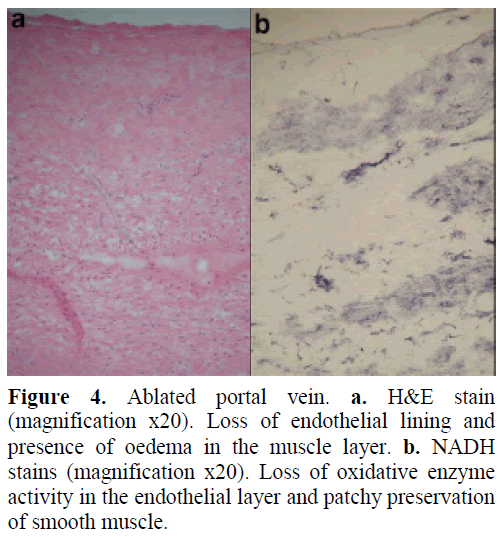 Effects of Variation in Duration of Ablation 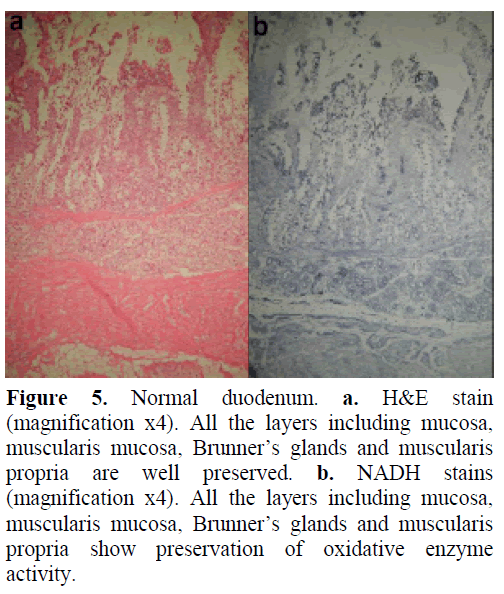 Complete ablation was noted in all the 5 animals with portal perfusion at the target temperature of 90°C and duration of 10 minutes (Table 2). Thermal injury to the portal vein was not seen in any animal. These results were not different from those in animals without simulated portal circulation.

Although the practice of thermal ablation of solid tumours is now well-established, there are well-recognised site-specific risks associated with ablation of pancreatic tumours. Any injury to the duodenum, bile duct or portal vein in a patient with nonresectable disease may lead to a lethal outcome. In order to explore the feasibility of radiofrequency ablation of the pancreas this study has evaluated the thermal kinetic profile of the ablation effect. At the outset, it must be emphasised that these results apply to an exvivo, non-tumour bearing, porcine model and that direct extrapolation of these results to man is not possible. However, when set in the context of the complete dearth of information on radiofrequency ablation of the pancreas in man, the results of the studies provide some guidance. First, the relation between target temperature and effect of ablation mirrors the effects seen in human liver tumours. Specifically, the optimal temperature for ablation of hepatic parenchymal tumours in man is 90°C and this derives from ex-vivo hepatic studies.

The optimum duration of ablation in clinical practice will be determined by the size of the tumour. In practice, small tumours (less than 3 cm) are likely to be resected and thus ablation will see clinical use in larger nonresectable pancreatic tumours where a more prolonged ablation time may be required. This study establishes that in an ex-vivo setting a minimal duration of 5 minutes is required to produce a 2 cm ablation. Thermal ablation is function of the intrinsic properties of the tissue and extrinsic thermal kinetic parameters. The main intrinsic factors affecting the effectiveness of ablation are tissue impedance and the proximity of large calibre vessels causing ‘heat sink’. It is well recognised that simulation of portal vein flow in an ex-vivo setting is problematic: flow rates of 1,500 mL/min seen in man cannot readily be duplicated. Ideally, an in-vivo animal experimentation setting should be used for this type of study but there is no large animal model of pancreatic cancer. In this study, the presence of flow in the portal vein did not affect ablation nor was there any effect of ablation on the portal vein. In conclusion, this study establishes that at temperature settings comparable to those currently in use for the ablation of human liver tumours, radiofrequency ablation produces consistent evidence of injury to pancreatic parenchyma in this ex-vivo porcine model. As in the clinical setting, the ablation is temperature and duration-dependent and in this model, an optimal temperature of 90°C for 5 minutes resulted in ablation of parenchyma with sparing of important peri-pancreatic structures.

Rita Medical Systems (Mountain View, CA, USA) provided partial financial support by providing the probes used in this study. We acknowledge the help of our colleague Mr Rory McCloy who provided us with the use of the Wolfson laboratory suite