We performed a retrospective observational analysis of patients prospectively evaluated following their initial episode of acute pancreatitis, in the Severity of Acute Pancreatitis Study (SAPS) database [9]. Four out of 102 enrolled patients fulfilled the above sequence of events: progression from a single self-limited episode of acute pancreatitis to recurrent attacks to chronic pancreatitis proven by CT scan. All 102 enrolled patients were not necessarily followed by computerized tomography (CT) scanning; hence there may be some inherent negative bias as more than four patients may have pathologically progressed. Patients were tested for PRSS1 gene mutations (R122H, N29I, A16V and K23R), CFTR gene sequencing and SPINK1 N34S polymorphism.

Table 1 summarizes the characteristics of the four SAPS patients. 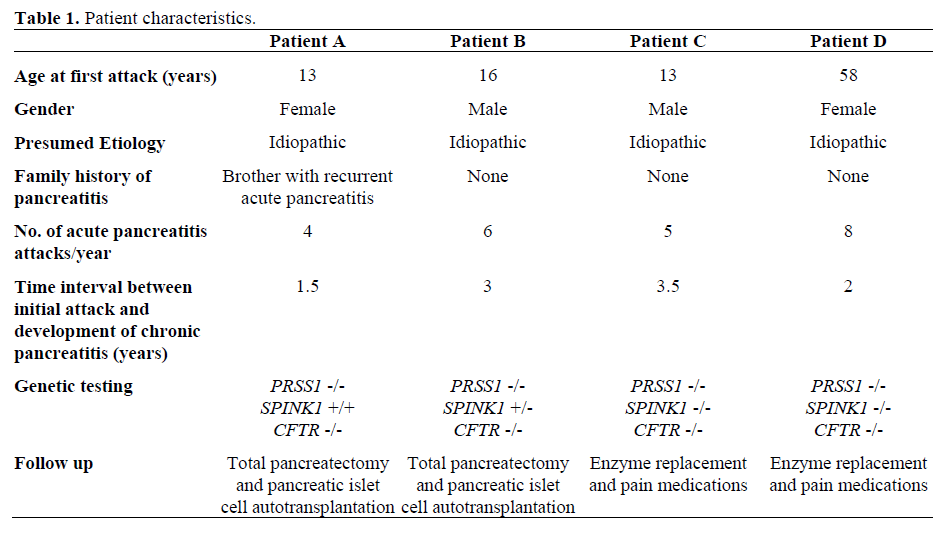 She experienced her first episode of acute pancreatitis at 13 years, presenting with classical symptoms of abdominal pain and elevated pancreatic enzymes. Family history was positive for pancreatic pathology (Table 1). Initial work up revealed a normal abdominal ultrasound with a CT scan consistent with acute pancreatitis. She was managed conservatively. Over the following two years, the patient had similar recurrent episodes occurring at 3 to 4 monthly intervals. Her work-up failed to identify a clear etiology. Following her fourth acute pancreatitis attack, an elective cholecystectomy was performed. After her fifth attack, she displayed signs of chronic pancreatitis to include progressive calcification on CT scans (Figure 1). Serial endoscopic retrograde cholangiopancreatograms (ERCPs) with pancreatic sphincterotomy and pancreatic duct stent placement were performed over time. Progressively, her pain became constant requiring chronic narcotic utilization. Four years following presentation, a complete pancreatectomy, splenectomy, roux-en-Y gastrojejunostomy and pancreatic islet auto transplantation was performed because of the frequency and severity of the patient’s symptoms. The patient is now 6 years since initial presentation and is clinically well since this intervention, requiring 6 units of insulin gargline per day.

He presented with his first episode of acute pancreatitis at 16 years of age. Conservative management successfully relieved his symptoms. His CT scan was consistent with acute pancreatitis without evidence of chronic pancreatitis. No discernable etiology was identified. The patient suffered from recurrent episodes of acute pancreatitis once every two months. All attacks were conservatively managed. At 18 years, he underwent a laparoscopic cholecystectomy. His gallbladder revealed evidence of small gallstones with a normal intraoperative cholangiogram. He continued to experience recurrent attacks and underwent several ERCPs with biliary and pancreatic sphincterotomies. One year later, progressive pancreatic calcifications were identified on abdominal CT scan. ERCP confirmed ductal changes consistent with chronic calcific pancreatitis. Five years following presentation, a complete pancreatectomy with pancreatic islet autotransplantation was performed. Post operatively he experienced intermittent episodes of nausea and abdominal pain suggestive of small bowel obstruction. An exploratory laparotomy corrected internal herniae through the transverse mesocolon. The patient is currently doing well and is placed on a NovoLog® (Novo Nordisk A/S, Copenhagen, Denmark) insulin pump.

He had his first episode of acute pancreatitis at 13 years, which was attributed to blunt abdominal trauma following a bicycle accident. An ERCP was normal. One year following presentation, an elective cholecystectomy was performed after an ultrasound showed biliary sludge. One year later, he experienced recurrent attacks of acute pancreatitis often requiring prolonged hospitalization with total parenteral nutrition. Etiology workup was negative. He progressively demonstrated evidence of chronic pancreatitis by CT and ERCP. Nine years following his first episode, the patient is currently managed by pancreatic enzyme replacement and pain medications.

Recently, many advances have been identified in the field of pancreatic disease genetics. The first pancreatitis susceptibility gene to be discovered was PRSS1 (cationic trypsinogen) in families with hereditary pancreatitis [13]. Substitution of arginine with histidine at position 122 eliminates the key autolysis site of trypsin. Prolonged survival of trypsin within the acinar cells leads to acute pancreatitis and recurrent attacks progress to chronic pancreatitis. SPINK1, the serine protease inhibitor Kazal-type 1, is a small molecule directly inactivating trypsin within the acinar cells. Substitution of asparagine with serine at position 34 results in increased risk of chronic pancreatitis [14, 15]. Of interest, two of the above reported patients (Patients A and B) were found to have the latter mutation. A key molecule in the pancreatic duct is the cystic fibrosis transmembrane conductance regulator (CFTR), which is a regulated anion channel located at the luminal surface of the duct cells. New models of pancreatic duct physiology indicate that most of the bicarbonate secretion is mediated through the CFTR molecule [8]. It has been recently demonstrated that CFTR mutations are very common in idiopathic and alcoholic chronic pancreatitis and some of the 1,250 known CFTR gene sequence variants may be pancreas specific [16, 17].

The sentinel acute pancreatitis event model was recently developed in an attempt to classify the multiple risk factors associated with chronic pancreatitis and the different roles of key players, such as the immune system and the pancreatic stellate cells [18]. This model organizes these factors into a hypothetical pathway that commences with an episode of acute pancreatitis and ends in the chronic form of the disease. The initial acute episode results in the activation of the immune system, including stellate cells and recruitment of key cells such as macrophages into the pancreas. Indeed, even if, with time, the pancreas may regain its normal appearing histology after an episode of acute pancreatitis, the inflammatory cells recruited during the episode remain in place and can therefore respond to further stimulating factors. Subjects with inadequate injury protection (e.g. presence of PRSS1, SPINK1 or CFTR mutations) who are challenged by metabolic or environmental stressors (e.g. pancreatic hyperstimulation) develop recurrent acute pancreatitis. A subset of these patients seem to have an altered immune response that leads to accelerated fibrosis and chronic pancreatitis [19].

We hereby present four patients who seem to fit this model. Indeed, all progressed from a simple self-limited episode of acute pancreatitis to recurrent attacks, separated by completely asymptomatic disease-free periods. Within a relatively short period of time, they showed signs of chronic pancreatitis by CT criteria. There was no evidence of chronic pancreatitis during a thorough evaluation at the time of their initial attack.

Two patients underwent surgical pancreatic resection along with islet cell autotransplantation to reduce the risk and complications of pancreatogenic diabetes. This procedure was initially reported in humans in 1980 and so far, more than 150 cases have been reported [20]. The approach involves fragmentation of the pancreas, digestion of the fragmented material with collagenase, followed by centrifugation [21]. Islets cells are then cultured for several days before being transplanted. The liver remains the most common site of implantation, followed by the spleen [22]. One of the limitations of this study is the fact that the CT scan may not be sensitive enough to detect early changes of chronic pancreatitis [23, 24]. Although the initial CT scans in all four patients showed only features of acute pancreatitis, we cannot completely rule out the possibility of an acute exacerbating stage of early chronic pancreatitis in these patients. The presented patients seem to fulfill the sentinel acute pancreatitis event hypothesis. The clinical course of these patients supports the concept that pancreatitis may be an entity with a broad spectrum of end-points ranging from an isolated episode of acute pancreatitis to chronic pancreatitis. Further studies and development of additional disease models are needed in order to fully establish this.