Recurrent Episodes of Acute Pancreatitis Due to Duodenal Gangliocytic Paraganglioma: Report of a Case

Context Gangliocytic paraganglioma is a rare tumor, almost always located in the second portion of the duodenum, andmanifested with upper gastrointestinal bleeding and abdominal pain. To date, only one case of duodenal gangliocyticparaganglioma presented with recurrent acute pancreatitis has been reported in the literature. Case report We present a72-year-old woman admitted to the hospital due to recurrent episodes of acute pancreatitis. Paraclinical examinationsshowed a polypoid mass in the second portion of duodenum which was removed surgically by local excision. Thepreoperative differential diagnosis was suggestive with gastrointestinal stromal tumor or adenoma. The histopathologyexamination revealed a duodenal gangliocytic paraganglioma. After a follow up period of seventeen months the patientremained without clinical evidence of tumor recurrence. Conclusion Our case report draws attention to the need forincluding in our differential diagnosis of recurrent acute pancreatitis the mechanical obstruction of the pancreatic duct dueto this tumor.

A 72-year-old woman was referred to our hospital due to three episodes of acute pancreatitis within the previous four months. She also referred weight loss of 10 kg in the last three months due to anorexia. There was no evidence of gastrointestinal bleeding or jaundice. Her medical history included hypertension and atrial fibrillation. No history of alcohol consumption or biliary disease was present. She was a non-smoker and her family history was unremarkable. Furthermore, according to the patient’s pharmacological history, drug induced acute pancreatitis was excluded.

Computed tomography recognized a mass of the duodenum (Figure 1). However, magnetic resonance imaging did not reveal any lesion. Radiological differential diagnosis included gastrointestinal stromal tumor or adenoma. A magnetic resonance cholangiopancreatography was performed showing dilatation of the common bile duct (diameter equal to 9 mm) and gradually narrowing of its diameter downwards. Endoscopic retrograde cholangiopancreatography (ERCP) revealed a submucosal tumor located in the second portion of the duodenum. The lesion was seen as a large pedunculated polypoid mass originating from the second part of the duodenum in close proximity with the ampulla of Vater (Figures 2 and 3). No cholangiography was performed due to failure of cannulation of the bile duct. The pancreatic duct was normal without dilatation in its body or narrowing of its size. A sphincterotomy was performed 6 mm along the pancreatic sphincter, as it is considered an endoscopic therapy for chronic pancreatitis with papillary stenosis [8]. Two months after the procedure of sphincterotomy, the patient had another episode of acute pancreatitis without jaundice. Hence, the obstruction of the pancreatic duct due to the intermittent movements of the mass was considered as the cause of the episodes of acute pancreatitis. The patient was referred for surgical consultation and regional resection was decided. The operation was performed one month after the last episode of acute pancreatitis. Intraoperatively (Figure 4), there was no sign of lymph node metastases or local extension of the tumor. 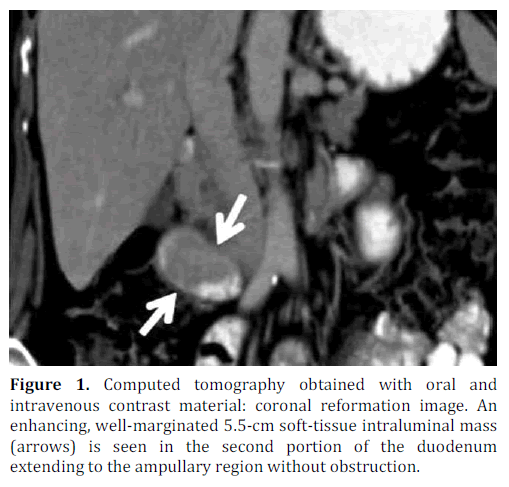 Figure 2. Proximal view of the tumor. 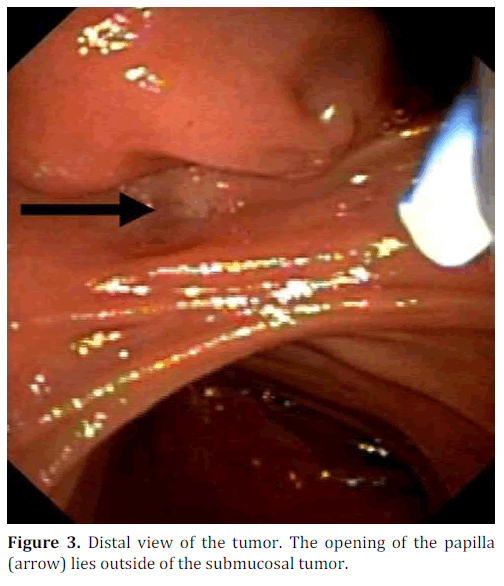 Figure 3. Distal view of the tumor. The opening of the papilla (arrow) lies outside of the submucosal tumor. 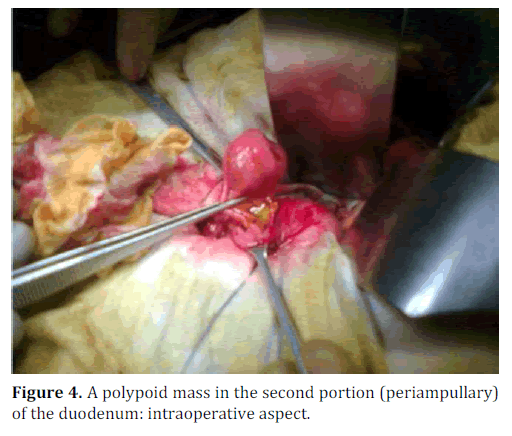 On gross examination, the specimen was a vaguely nodular, predominantly submucosal tumor superimposed by intestinal mucosa, protruding into intestinal wall, and in close proximity with the ampulla of Vater. It was measuring 3.7x2.6x2.3 cm.

Histologically, it was located in the submucosa (Figure 5), relatively well demarcated without a capsule and with expansive pushing margins. Its stroma was extensively hyalinized. It consisted of epithelioid cells and spindle-shaped cells forming ill defined interlacing fascicles, and dispersed ganglion-like cells amongst them (Figure 6). The epithelioid cells were rather bland, arranged in alveolar, trabecular or rosettes formations, with slight nuclear pleomorphism, and sparse mitoses (less than one per 10 HPF (x200)); no necrosis was evident (Figure 7). Immunohistochemically, epithelioid cells were positive for synaptophysin and chromogranin A (Figure 8). Spindle-shaped cells and ganglion-like cells were found expressing S-100 protein (Figure 9), while epithelioid cells were negative for S-100 protein expression. Combined histopathological and immunohistochemical findings were consistent with gangliocytic paraganglioma. 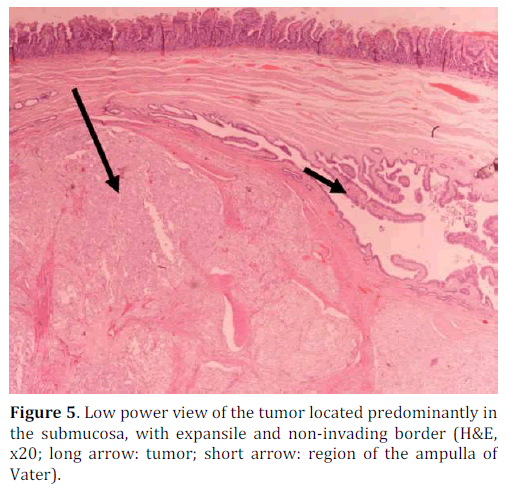 Figure 5. Low power view of the tumor located predominantly in the submucosa, with expansile and non-invading border (H&E, x20; long arrow: tumor; short arrow: region of the ampulla of Vater). 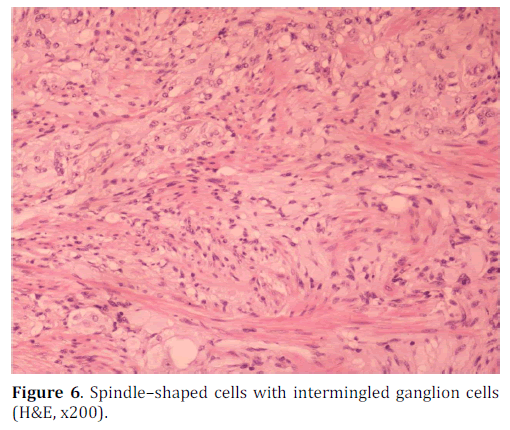 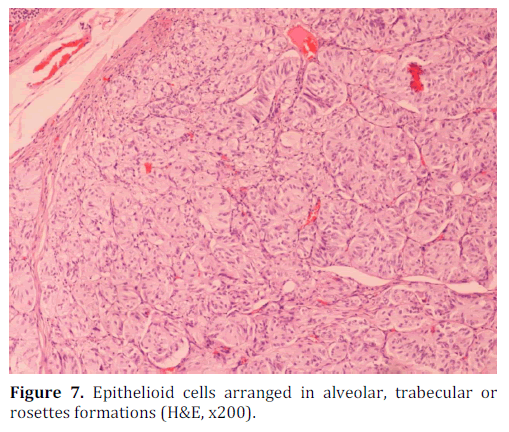 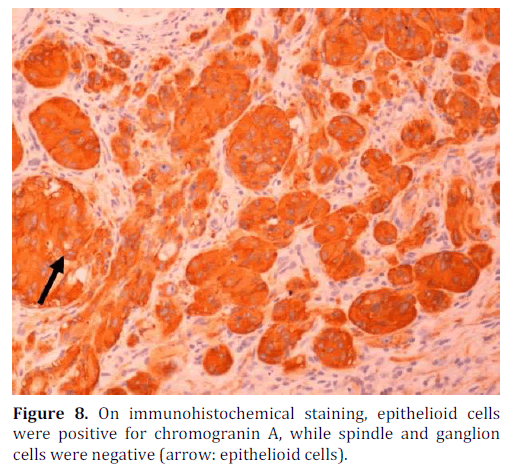 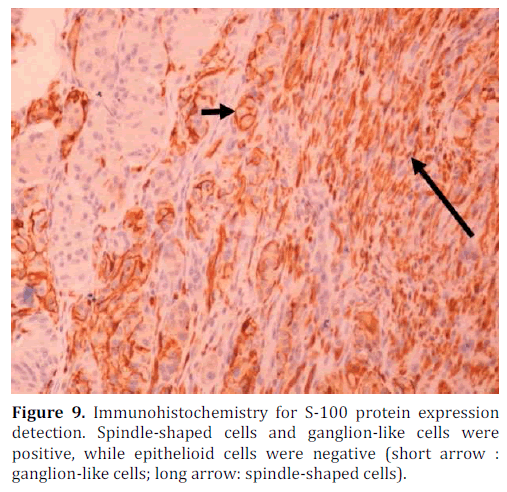 The patient had a generally uneventful recovery. There was no clinical evidence of tumor recurrence after a follow up period of seventeen months.

Gangliocytic paragangliomas represent rare tumors of the digestive tract. These tumors occur most frequently in the second portion of the duodenum [1, 6, 9] near the ampulla of Vater, in the duodenal papillary region and adjacent areas [10]. However, there have been reported cases in the literature where gangliocytic paragangliomas developed in sites of the digestive tract, as well as extragastrointestinal sites including the appendix, lung, mediastinum, nasopharynx, bronchus, and even arising in an ovarian cystic teratoma [1].

Gangliocytic paragangliomas usually present initially with gastrointestinal bleeding, as the most common symptom, followed by abdominal pain and anemia [11]. However, in our case there was no sign of gastrointestinal bleeding. Recurrent episodes of acute pancreatitis as the initial manifestation of these tumors has been reported only once so far [7].

As far as the histology of these tumors is concerned, they consist of epithelioid areas that are histologically similar to conventional paraganglioma or may have a ribbon-like or trabecular arrangement similar to that of carcinoid. Around the epithelioid areas there is a delicate network of Schwann cells and nerve axons. Among the epithelioid cells there are ganglion cells. They can be easily recognized by their abundant cytoplasm, vesicular nuclei, and faint cytoplasmic basophilia. Some gangliocytic paragangliomas may resemble a gaglioneuroma as they have a protrusive neuromatous stroma [1].

Gangliocytic paragangliomas comprise three different types of cells: ganglion-like cells, epithelioid and spindle-shaped cells [1, 4, 11]. This variety of cell types has led to a conflict about tumor’s embryologic origin and the creation of three hypotheses about ectodermal, endodermal or even hamartomatous development [2, 12]. However, the origin of gangliocytic paragangliomas remains unclear [4, 11].

Immunohistochemically, the paraganglioma and areas that resemble the carcinoid express both synaptophysin and chromogranin. The ganglion cells express neuron-specific enolase, synaptophysin and neurofilament protein. S-100 protein is easily demonstrated in the sustentacular network surrounding the epithelioid cells [1]. Many other antigens can be expressed by the cells of the epithelioid areas, including neuron-specific enolase, glucagon, insulin, pancreatic polypeptide, leuenkephalin, somatostatin, vasoactive intestinal peptide and serotonin [1, 11].

Regarding the treatment of these tumors, simple excision, including endoscopic resection, is considered as an adequate therapy [1]. However, several methods are used such as simple resection [13], delayed resection after hemostasis [10] or excision by endoscopic mucosal resection with submucosal infiltration of saline solution [6]. In cases that endoscopic resection is not possible, the tumor can be removed surgically either with local excision - due to the well-circumscribed and submucosal characteristics - or with more aggressive approaches such as pancreaticoduodenectomy when lymph nodes are invaded [4, 12].

Gangliocytic paragangliomas are regarded as benign tumors whereas there are cases in the literature referring to nodal invasion or local recurrence that suggest malignancy [6, 9, 13]. The tumors might be sessile or pedunculated arising in the submucosa and deforming the overlying mucosa [1]. The maximum diameter of the gangliocytic paragangliomas averages 2.5 cm (range: 0.55-10 cm) [11].

No recurrence of the disease after the surgical excision has been reported in the literature [11], except for one patient who did not receive a R0 resection at the primary operation [5]. There is only one report of a patient who underwent radiotherapy after surgical intervention. According to the authors, this was a controversial decision, which was made due to the evidence of regional lymph node metastasis in order to eradicate any possible residual disease which was not removed during surgery and to reduce the risk of locally recurrent disease [9]. No death from gangliocytic paraganglioma has been reported so far [11].

In conclusion, this is the second reported case in the literature of a patient with recurrent episodes of acute pancreatitis as primary manifestation of duodenal gangliocytic paraganglioma. Gangliocytic paraganglioma, a periampullary tumor of the duodenum, should be included in our differential diagnosis as a rare cause of recurrent acute pancreatitis. Complete surgical or endoscopical removal is associated with cure in the vast majority of patients.