The exact cause of delayed gastric emptying following pancreaticoduodenectomy appears to be multifactorial [10, 11, 12, 13, 14, 15]. Altered neuro-hormonal pathways, physiologic response to intra-abdominal sepsis or post pancreaticoduodenectomy associated acute pancreatitis and anatomic factors appear to play a role [16, 17, 18, 19]. Due to a lack of homogeneity between groups of patients studied and variations in definitions, definite conclusions regarding the variables that influence delayed gastric emptying cannot be reached [20].

Technical factors in the construction of the gastroenterostomy or duodenoenterostomy have been implicated in the development of delayed gastric emptying [16, 21, 22]. Significant edema or kinking at this anastomosis at either the afferent or efferent limb may be a factor in the development of delayed gastric emptying. Any potential obstruction at the level of this anastomosis following a standard reconstruction would increase biliary and pancreatic anastomotic outflow pressures. This could translate to an increase risk of pancreatic and biliary fistula and intra-abdominal sepsis.

All patients undergoing pancreaticoduodenectomy by a single surgeon (M.N.) from August 2009 to November 2011 were included in this study. Forty-four consecutive patients were included. To determine any possible benefit in delayed gastric emptying rates and overall outcomes the addition of Braun enteroenterostomy was introduced in August 2010, after20 non-pylorus preserving pancreaticoduodenal resections had been performed having determined a baseline delayed gastric emptying rate. Data were collected prospectively. Cross-checks were made between prospectively collected data and patient’s charts to re-confirm recorded findings.

Demographic data, laboratory tests and indications for surgery were recorded for all patients. Sodium picosulfate (Picoprep; Ferring Pharmaceuticals, Pymble, NSW, Australia) bowel preparation was administered the day prior to surgery.

All surgical procedures involved one lead surgeon (M.N.) with the reconstruction technique set-up has shown (Figure 1). Prophylactic antibiotics and subcutaneous heparin was administered in all cases. Antrectomy was performed as routine by use of linear stapler. A retrocolic limb jejunum was utilized for the pancreatic and biliary anastomoses. An end-to-side pancreaticojejunal two-layer anastomosis was formed. 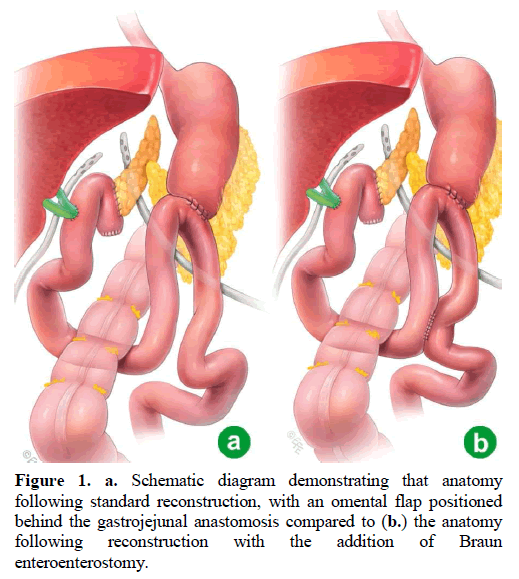 The internal duct to mucosa reconstruction was created with interrupted 5/0 Maxonsutures (Covidien Pty. Ltd., Melbourne, Australia). An outer row of interrupted 3/0 Silk (Covidien Pty. Ltd., Melbourne, Australia) was used to approximate the pancreatic capsule parenchyma with the jejunal seromuscular layer. Anend- to-side hepaticojejunostomy was formed 10 to 15 cm distal to the pancreatic anastomosis using a single layer using 5/0 Maxon or 4/0 Vicryl (Johnson and Johnson Co., Melbourne, Australia) based on the duct diameter. An antecolic limb of intestine was the brought up to the stomach to create a gastroenterostomy in two-layer fashion spanning 5 to 6 cm (3/0 Vicryl and 3/0 Silk). A tongue of vascularized omentum was fashioned from the greater curve of the stomach to lay behind the gastroenterostomy as previously described [16].

A Braun enteroenterostomy, when performed, was constructed approximately 25 cm distal to the gastroenterostomy by a side to side stapled anastomosis, with two firings of 45 mm length vascular stapler in opposite directions. The enterotomy was closed in two layers (3/0 Vicryl and 3/0 Silk). The defect between the small bowel limbs and the mesentery was closed with interrupted 3/0 Silk sutures. Approximately 10 to 20 minutes was required to complete this anastomosis.

One round 19F silicon Blake® drain (Johnson and Johnson Co., Melbourne, Australia) was placed posterior to the biliary and one posterior to the pancreatic anastomoses and connected to low pressure closed bulb suction. A 16F nasogastric tube was inserted and positioned in the gastric fundus before the end of the case.

A standard fast-track management protocol was utilized for all patients. Post-operatively all patients were treated in an intensive care unit (ICU) setting for only the first 12 to 24 hours, unless further monitoring was required. Antibiotics were ceased after 24 hours. Nasogastric tubes were routinely removed day 1 post operatively. A liquid diet was commenced day 2 post operatively. There was progression from fluid intake to a soft diet as tolerated over the next few days. The right and left drains were checked for amylase and bilirubin at day 5 and were removed if there was no evidence of any pancreatic or biliary leakage. In all cases erythromycin lactobionate (Link Medical Products Pty. Ltd, Clareville, NSW, Australia) was given intravenously at 200 mg every 6 hours starting on day 2 post-operatively and continued until a soft diet was tolerated. Jejunal feeding tubes were only inserted in patients considered to be malnourished and in whom a period of additional nutritional supplementation was through be required. A proton pump inhibitor was administered intravenously following surgery and converted to oral dosage once a diet was tolerated and continued for at least two weeks post discharge. Pancreatic enzyme supplements were prescribed once a soft diet was commenced. This was continued postoperatively with the dosage altered according to symptoms. Tight serum glucose control was maintained post-operatively by use of an insulin sliding scale. Patients were discharged after day 7 if they were self-caring, had no evidence of an infection and were tolerating a diet.

The primary end point of this study was delayed gastric emptying. This was defined according to the International Study Group of Pancreatic Surgery (ISGPS) as the inability to return to a standard diet by day 7 post-operatively or reinsertion of a nasogastric tube prior to this period [6]. In cases of delayed gastric emptying the severity was defined. All other specific complications were defined according to ISGPS criteria where available [8, 24]. In particular, pancreatic fistula was defined as any measurable amount of fluid after post-operative day 3 with an amylase level 3 times or greater than serum amylase [25]. Patients in whom intra-abdominal collections required drainage in the perioperative period were considered to have high impact pancreatic fistula, unless another explanation was clearly available. Mortality was defined as death within 30 days after surgery.

Results were expressed as median (range) unless otherwise stated. Comparisons between categorical variables were determined by the chi square, the linearby- linear association and the Fisher’s exact tests as appropriate. Non-categorical variables were assessed by the Mann-Whitney U test. Multivariate analysis using a backward regression model was undertaken to determine factors independently associated with delayed gastric emptying including all factors where the P value was less than 0.1 on univariate analysis. A statistical software package (SPSS Version 18.0, Chicago, IL, USA) was used for statistical analysis, with P<0.05 considered statistically significant.

The characteristics of the patient treated in each group are shown in Table 1. There were 24 patients in the Braun enteroenterostomy group and 20 in the standard reconstruction group during the study period. There were no significant differences in demographic characteristics. The median bilirubin level at the time of diagnosis was significantly lower in the Braun enteroenterostomy group (15 μmol/L, range: 4-233 μmol/L vs. 54 μmol/L, range: 4-405 μmol/L; P=0.036), while the albumin level was significantly higher (41 g/L , range: 25-44 g/L vs. 34 g/L, range: 26-43 g/L; P=0.007). There were no other significant differences in laboratory variables. 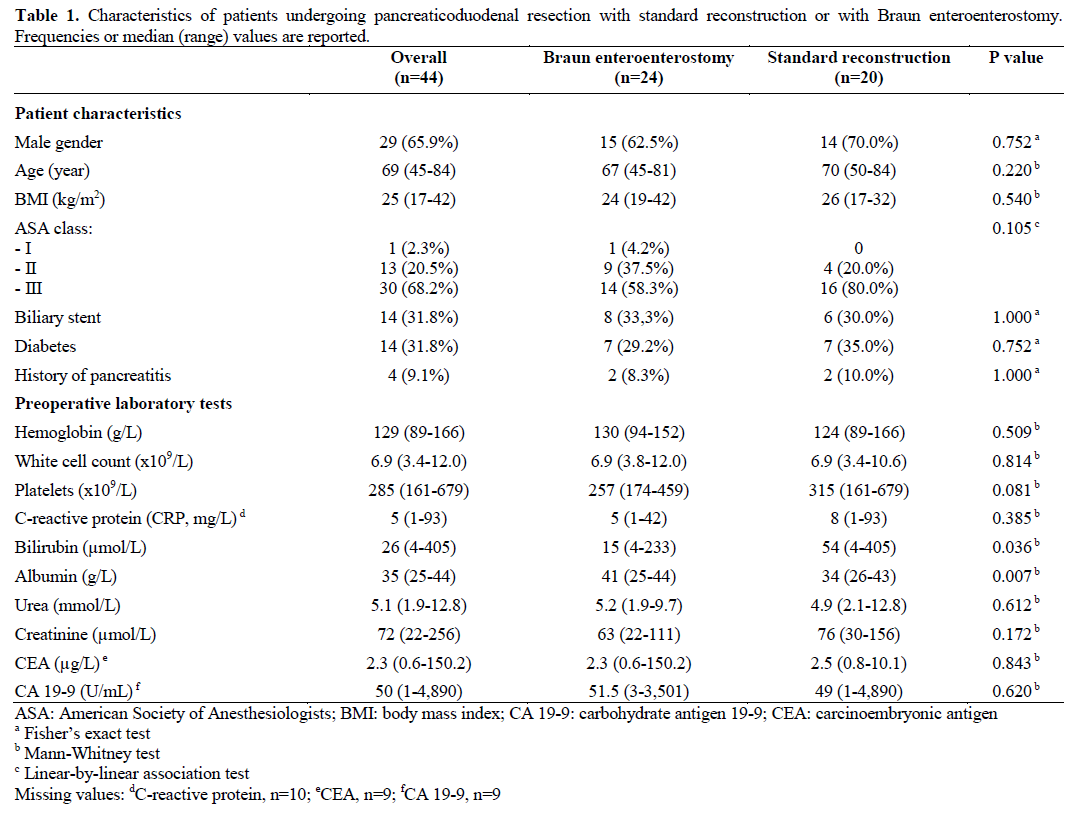 Operative and perioperative details are summarized in Table 2. In this series the main tumor location was within the pancreatic uncinate process in 40.9% of cases. There were no major differences between the groups in terms of tumor type, location, pancreatic texture, pancreatic duct size, resection margins and the number of nodes harvested. The median estimated blood loss was lower in the Braun enteroenterostomy group (325 mL, range: 100-1,500 mL vs. 450 mL, range: 100-1,500 mL; P=0.040); however, the intraoperative blood transfusion requirements were similar. Post-operative length of intensive care stay and overall length of hospital stay was similar. Patients in the Braun enteroenterostomy group less frequently required total parenteral nutrition (TPN) during the course of their management (1/24, 4.2% vs. 6/20, 30.0%; P=0.035). Complication data are shown in Table 3. There was one mortality in the standard reconstruction group in this series (4.2%). This was in a 65-year-old patient with advanced bile duct cancer treated by right trisegmental and caudate liver resection combined with pancreaticoduodenectomy. The patient died of massive sudden intra-abdominal hemorrhage at day 8 post operatively, presumed secondary to ruptured pseudoaneurysm. 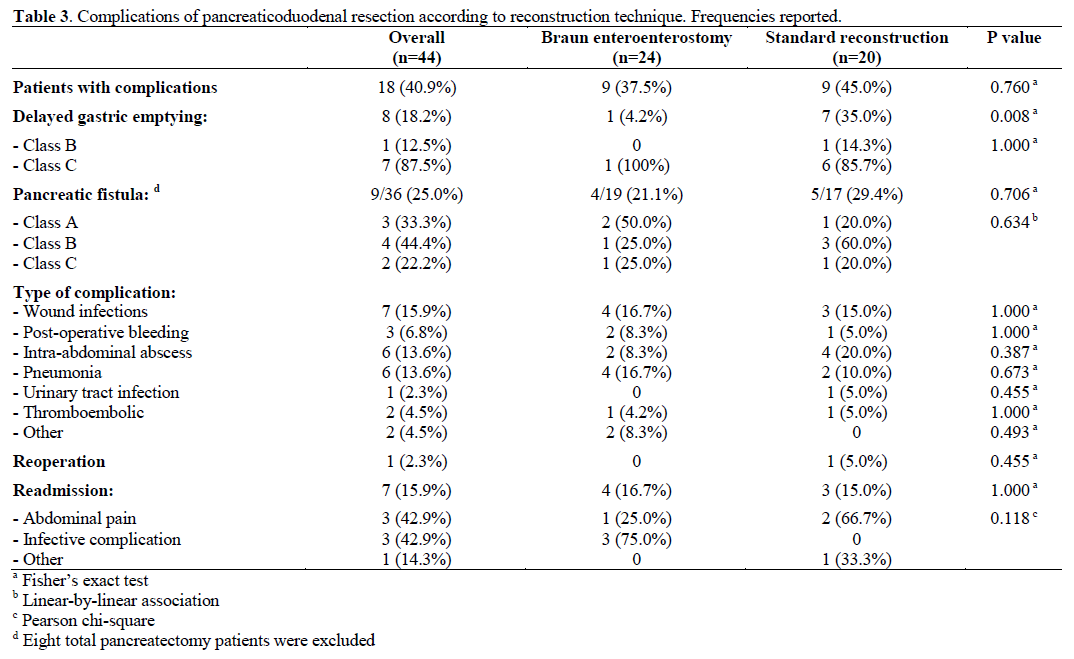 The overall pancreatic fistula rate excluding the eight patients who had a total pancreatectomy in this series was 25.0%. The fistula was graded as class A in 33.3% of cases. There were no significant differences between the groups, although in the Braun enteroenterostomy group 50.0% of fistulas were class A compared to 20.0% in the standard group. Delayed gastric emptying continues to be a common problem after pancreaticoduodenal resection. The incidence is higher than previously reported if it is defined using strict ISGPS criteria in centers performing standard pancreaticoduodenal resection and reconstruction techniques [7, 8, 9]. Theories regarding the causes of delayed gastric emptying include: pyloric, antral and duodenal ischemia [26, 27], gastroparesis related to abdominal complications [10, 12, 28, 29, 30, 31, 32], post-operative pancreatitis associated pancreatic leak or ilues [19, 33], disruption of hormone and neuronal homeostasis mechanisms [12, 15, 17, 20, 34, 35, 36, 37, 38, 39], pylorspasm [18, 40] and torsion or angulation at the gastroenterostomy or duodenoenterostomy [21, 26, 41].

In our study all patients underwent antral resection as the preferred technique. This allowed consistent gastrojejunostomy reconstruction with no major issues regarding anastomotic blood supply. We acknowledge that there are some reports of long-term advantages of pylorus preservation, including earlier recovery of body weight, reduced diarrhea, and reduction in dumping symptoms [32, 42, 43]. This is however not supported by all studies [44]. Several studies have suggested decreased delayed gastric emptying antral resection [45, 46, 47]. However, most large series suggest that there is no difference in delayed gastric emptying between pylorus preservation and antral resection [48, 49].

A change in technique was performed in an attempt to reduce delayed gastric emptying rates. All operations were performed using the same technique, with the only difference being the addition of Braun enteroenterostomy in some patients. It could however be argued that improvements in results may reflect a learning curve [50]. All these cases were performed by one surgeon after completion of fellowship training in high volume pancreatic surgery centers. A learning curve is unlikely to provide an adequate explanation, given that all other complications remained the same, including the overall pancreatic fistula rate. There was a reduction in estimated blood loss in the Braun enteroenterostomy group, which was not clinically significant. We acknowledge that our study suffers from a lack of randomization and it was performed in a single institution during two separate time periods. All patients however had a uniform operative technique and there was no selective use of a particular method, with the first 20 consecutive patients treated by standard reconstruction and the next 24 consecutive patients having the addition of a Braun enteroenterostomy. In this series there was a planned change of technique to determine if there was benefit in performing a Braun enteroenterostomy, rather than a change of technique due to the discovery of a particular problem. No patients were excluded from this study.

Our study suggests that the use of Braun enteroenterostomy leads to significant reductions in the incidence of delayed gastric emptying following pancreaticoduodenal resection. The technique adds very little to overall operative time and itself does not appear to cause increased morbidity. A randomized control trial is required to fully confirm the potential advantages of Braun enteroenterostomy in reducing delayed gastric emptying.