Context Autoimmune pancreatitis is a rare disorder characterized by the systemic deposition of IgG4 plasma cells.Extrapancreatic manifestations of autoimmune pancreatitis depend on the site of plasma cell deposition. The most commonextrapancreatic site of involvement is the bile duct followed by the retroperitoneum and kidneys. Case report We report acase of a patient with autoimmune pancreatitis and renal lesions who underwent MRI prior to and after corticosteroidtherapy. Conclusion We emphasize the role of diffusion weighted imaging (DWI) and apparent diffusion coefficient (ADC)findings on MRI in evaluating the response to steroid therapy.

A 57-year-old male presented with diarrhea and weight loss of approximately 30 pounds (13 kg). His diarrhea persisted and progressively worsened despite a gluten free diet. His fecal pancreatic elastase was less than 50 μg/g (reference range: greater than 200 μg/g), which was indicative of severe pancreatic exocrine insufficiency. The patient also reported a history of submandibular gland swelling. Submandibular gland biopsy revealed scant polymorphous lymphocytes, some with reactive changes, as well as rare giant and ductal cells. He was found to have mild renal insufficiency with a serum creatinine of 1.6 mg/dL (reference range: 0.6-1.3 mg/dL). His baseline serum IgG4 level of 16.4 mg/dL (reference range: 4- 86 mg/dL) and the baseline liver function tests were both normal.

Computed tomography (CT) scan of the abdomen demonstrated an enlarged, sausage-shaped pancreas with mildly decreased enhancement on arterial phase and common bile duct dilation with tapering of the distal duct indicative of a benign stricture. Hypoenhancing non-cystic mass lesions were noted in bilateral renal parenchyma in all three phases (Figure 1). An endoscopic ultrasound revealed a diffusely hypoechoic pancreas without a mass lesion and an upper endoscopy was performed to obtain biopsies of the major papilla for IgG4 staining. The major papilla was prominent but biopsies demonstrated normal duodenal mucosa with only rare IgG4 staining cells present. 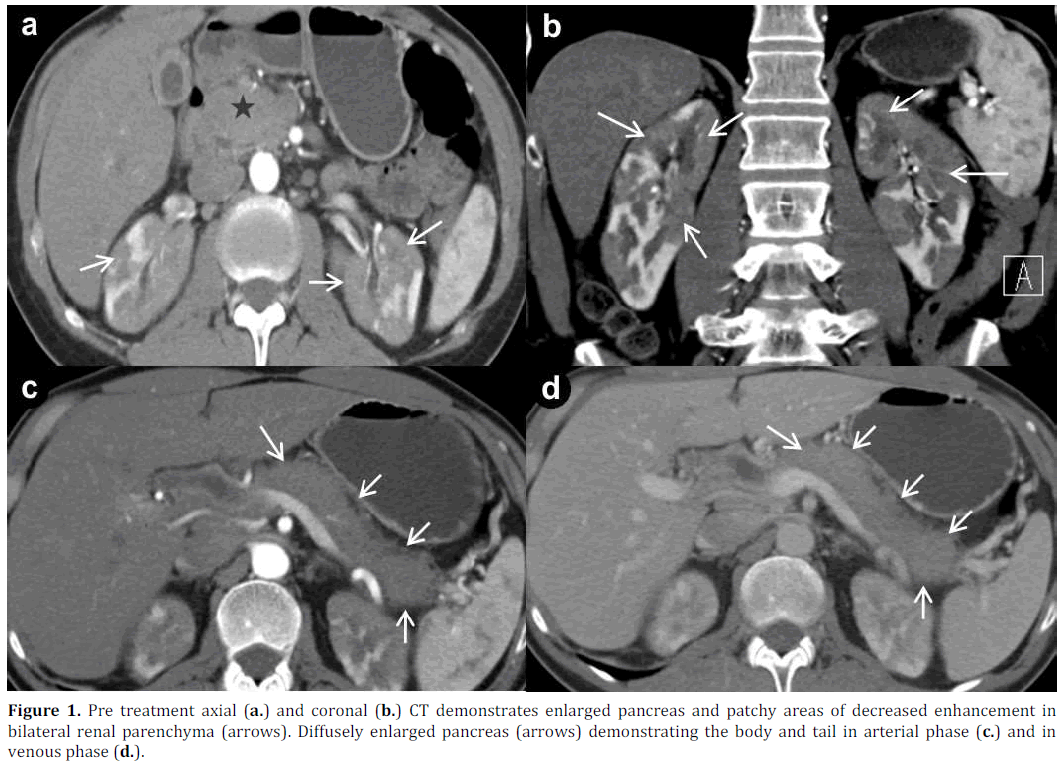 MRI demonstrated diffuse pancreatic enlargement which was hypoenhancing on T1-weighted images. There was a smooth stricture in the distal common bile duct. There were also wedge shaped regions of T2 hypointensity and decreased renal enhancement bilaterally with apparent diffusion coefficient (ADC) values of 1.027 x10-3 mm/sec2 in right kidney (compared to an ADC value of 2.040 x10-3 mm/sec2 in adjacent normal renal parenchyma) and 1.065 x10-3 mm/sec2 in left (compared to an ADC value of 1.940 x10-3mm/sec2 in adjacent normal renal parenchyma). There was no peripancreatic edema on pretreatment MRI. The imaging findings, like the CT findings, were suggestive of autoimmune pancreatitis (Figure 2). 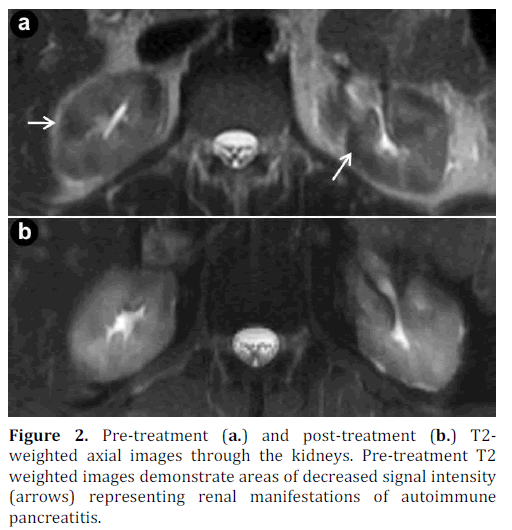 An MRI of the abdomen obtained 5 months after completion of induction corticosteroids revealed homogeneous enhancement in the pancreas. There was mild dilatation of the extrahepatic bile duct but this had improved compared to his pre-treatment MRI. The appearance of the abnormal renal cortical enhancement was also improved compared to the pre-treatment MRI (Figure 3). Diffusion weighted MRI revealed a significant increase in the ADC values in left (from 1.065 x10-3 mm/sec2 to 2.024 x10-3 mm/sec2; i.e., 90.0% increase) and right (from 1.027 x10-3 mm/sec2 to 1.854 x10-3 mm/sec2; i.e., 80.5% increase) kidneys after corticosteroid therapy (Figures 4 and 5). For reference the ADC values of the adjacent normal renal parenchyma were (right kidney: 2.105 x10-3 mm/sec2, left kidney: 2.021 x10-3 mm/sec2, comparable to the values before treatment). 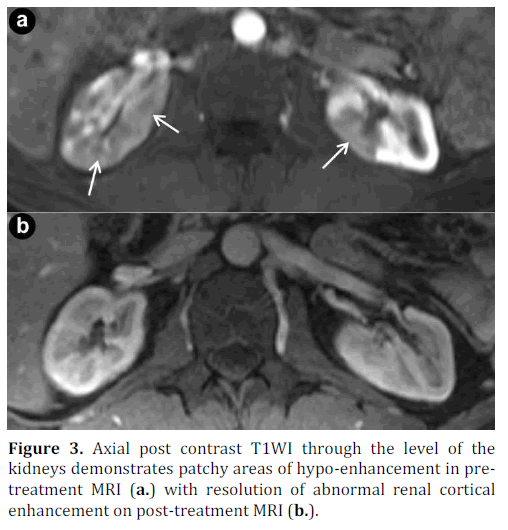 Figure 3. Axial post contrast T1WI through the level of the kidneys demonstrates patchy areas of hypo-enhancement in pretreatment MRI (a.) with resolution of abnormal renal cortical enhancement on post-treatment MRI (b.). 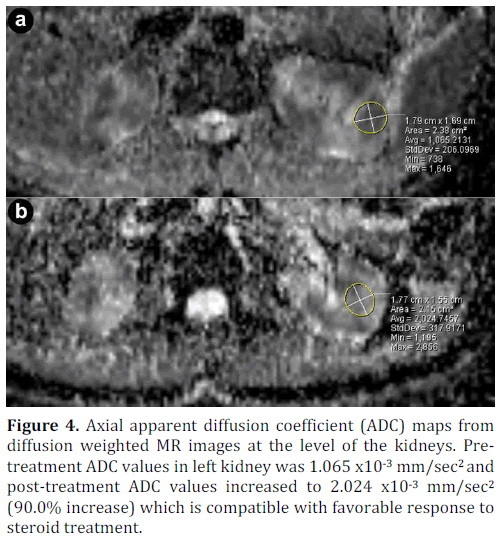 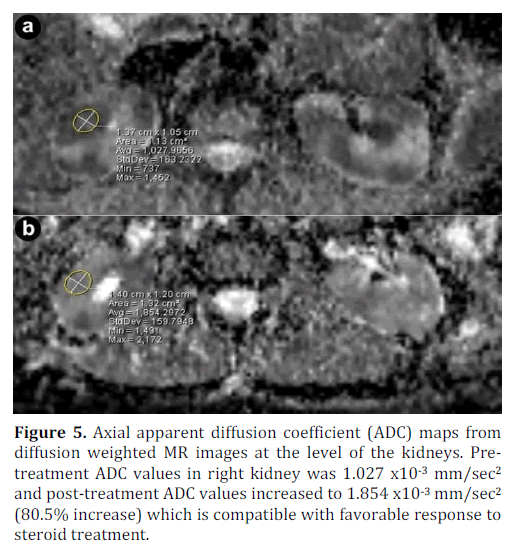 In a large cohort with a wide variety of pancreatic diseases, Ghazale et al. demonstrated that elevated serum IgG4 levels are characteristic, but not diagnostic, for the diagnosis of autoimmune pancreatitis [2]. Since serum IgG4 levels cannot be used to evaluate response to corticosteroid therapy in all patients with autoimmune pancreatitis, clinicians rely more on improvement of symptoms and imaging findings. Sahani et al. demonstrated significant parenchymal changes in the pancreas like improvement of swelling, loss of lobularity and heterogeneity in patients with partial response to corticosteroid therapy. There was also a statistically significant decrease in the size of the pancreas (head, neck, body and tail) measured before and after corticosteroid therapy by CT in patients who demonstrated partial response [3]. Renal lesions are found in approximately 35% of patients with autoimmune pancreatitis, with the renal parenchyma involved in 30% and the remainder involving the renal sinus and pelvis [4, 5]. Although both CT and MRI sequences, such as T2 weighted imaging and T1-post contrast imaging, demonstrate anatomic changes in the kidneys before and after treatment, there is lack of a quantifiable marker for response to therapy [6].

Our report is the first to demonstrate the utility of diffusion weighted imaging (DWI) in MRI for evaluating response to corticosteroid therapy in a patient with renal lesions due to autoimmune pancreatitis. The apparent diffusion coefficient, which can be obtained from diffusion weighted MRI, is a quantification of the Brownian movement of water molecules. The presence of inflammation results is restriction of diffusion and will be reflected by low ADC values and, with resolution of inflammation, water molecules are able to freely diffuse across cell membranes resulting in higher values compared to the pre-treatment ADC values. ADC values have been shown to be a useful imaging biomarker for assessing early treatment response in patients with liver and brain tumors [7, 8, 9]. The ADC values of the renal lesions markedly increased in our patient after corticosteroid therapy. While it is not clear as to whether an 80-90% increase in ADC values constitutes a partial or complete response, the patient had an overall improvement in his symptoms and renal function as assessed by serum creatinine. Since the ADC values of his renal lesions increased in parallel to the decrease in his serum creatinine with corticosteroid therapy, diffusion weighted MRI may have a role in monitoring response to therapy of renal lesions in patients with autoimmune pancreatitis. Future studies should further evaluate the use of ADC mapping before and after the administration of corticosteroids in a larger cohort of patients with renal lesions due to autoimmune pancreatitis.