In the last five years many authors, both Europeans, and Asiatic have emphasized the role of extended lymph node dissection and resection of retropancreatic tissue as the most significant technical options to achieve a radical intent in Duodenopancreatectomy for cancer. The scientific literature has thus given much importance to the removal of mesopancreas that, according to many authors, is a well-defined anatomical entities and most frequent site of recurrence after duodenopancreatectomy. The aim of this work is to analyze, in this regard, the literature data and finally make our contribution in favor of excision of mesopancreas that we have always realized, in the last six years of our experience, and that we believe underlie the reduction in the incidence of residual disease (R1) after duodenopancreatectomy.

In the latest scientific works are appeared numerous retrospective analysis of the results of the surgery of the head of the pancreas cancer, implemented with radical intent, which showed that the overall survival and disease free survival, are mainly related to the coexistence of several factors; both intrinsic to cancer: preoperative serum level of Ca 19-9 more or less 40 U/ml, absent perineural invasion; both related to the surgery: R0 resection [1, 2, 3].

Some of high volume pancreatic surgery centers have shown that: the cancer grading, neoadjuvant therapy, the number of positive lymph nodes, the presence of metastases in the lymph nodes of the station 14 a-b and the number of total lymph node metastases, represent independent factors of high statistical significance for disease recurrence (R1) [4].

Among the items that were found statistically significant from the point of view of prognosis, Paiella et al. [5] after performing a systematic review and meta-analysis have observed that on over 2141 patients undergoing DP for cancer, those who had metastases to the para-aortic lymph nodes (364 patients), showed a net decrease in median survival (p<0.0001) than those in which the lymph nodes they were negative.

Therefore lymph nodes involvement, especially the lymph nodes located in the posterior pancreaticodudenal site, (station 13), at level of mesenteric superior artery (station 14), and in the space between the aorta and renal vein (station 16) [5, 6], are the lymph nodes that should be removed, if you want to accomplish a radical resection of the tumor head of the pancreas [7].

If this is the excision strategy with intent to radical DP you must take into account the point of view of those who believe that, to get this radicality and then to remove the most frequently involved lymph node sites, it is mandatory to carry out a resection of the posterior margin of the pancreas. In this site, in fact, the tissue contain, in addition to these lymphatic structures, also fat, nerves and vessels, that all together, make up what is currently defined as mesopancreas [8, 9].

This procedure of excision should be an indispensable stage of pancreatic cancer treatment, if you want to make a radical surgery [10]. This method of excision, to be radical as proposed by Inoue Y et al. [11] must include the medial and lateral tissue of the superior mesenteric artery, the one around the trunk mesenteric portal, if necessary with any vein resection, until reaching the medial border of the ventral pancreas and uncinate process.

This approach is contrasted with that proposed by Aimoto describing the “Left Posterior Approach of Pancreaticoduodenectomy with Total Mesopancreas Excision and Circumferential Lymphadenectomy Around the Superior Mesenteric Artery”. Although the rate of complications does not differ from the standard procedure, however, a higher percentage of re-interventions (5% vs. 0%) is reported [12].

A pancreatic resection achieved with this type of resection of the posterior margin, has the best guarantee of achieving that radicality that otherwise with standard resections, the majority of the authors, have proven to be burdened by a percentage of residual disease that varies from 15% to 35% of the cases [13].

And for this reason that we have been advocates for more than ten years of extended lymphadenectomy in the treatment of pancreatic cancer and since 2010 we have always realized, in the treatment of cancers of the head, the DP with excision of mesopancreas [14, 15].

The results of this procedure, acknowledged and confirmed by all those who have adopted it, can be defined as follows:

1. Reduction of the positivity of the posterior margin

In our recent study, being published, we compared the results of DP with standard lymphadenectomy (DP Standard: 42 cases), versus a DP with total mesopancreas excision (DP-TMpE: 40 cases). Multivariate analyzes conducted on many parameters, it showed statistical significance in particular on two data: the removal of a number of major lymph nodes in TMpE (21 nodes), versus those removed after DP-Standard (12 nodes) and especially a greater number of positive margins in the rear PD-Standard: 35.7% versus 12.5% of DP-TMpE.

These two elements in our opinion, in addition to confirming what is reported by other authors in the literature, highlights an important fact: that if you want to reduce the incidence of early recurrence of the disease in the first six, twelve months (35% - 65% of cases) that, as reported by Balay [16] occurs in over 94% of cases in the rear, near the hemostatic clip in 82% of cases, near the medial border of the mesenteric sup. artery, it is necessary to conduct a complete and thorough cleaning of the posterior margin which ends up match, obligatorily, the complete removal of mesopancreas, especially in those cases in which the tumor appeared with the parameters of venous borderline resectable tumor.

As stated Kawabata [10] the two diffusion lines cephalic tumor along the directives of the superior mesenteric artery medially and superiorly gastroduodenal artery suggest even more clear and anatomically the need to carry out an accurate excision of the tissue that makes up the back edge, if you want to achieve that desired radical, in order to obtain a reduction of the incidence of recurrent disease.

As the highlight of this technical step is cleaning the medial and lateral margin of superior mesenteric artery, there are two techniques of performance: a top-down approach that provides for the origin identification of superior mesenteric artery from the aorta and then the isolation downwards, until the first jejunal branches, the other is a reverse approach from the bottom upwards, which we prefer, which allows, according to us the most easy retrieval of the medial edge artery and then, ascending upwards, its isolation after dissection and tying of the inferior pancreaticoduodenal artery (Figure 1). 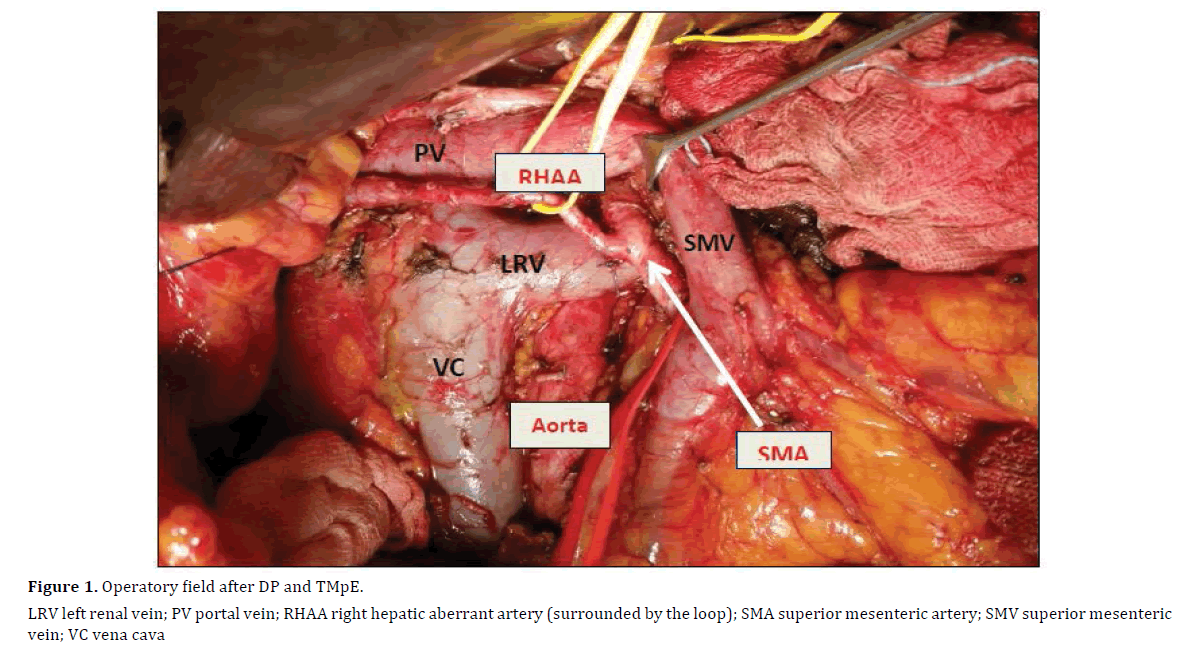 A technical detail that is worth mentioning is represented by the coexistence of an aberrant right hepatic artery arising from the superior mesenteric artery. It 'true that this anomaly, if not recognized, after any section, can be the basis of ischemic complications of the liver and biliary tract above, but having to carry out a resection of mesopancreas, may represent instead a guide to follow backlinks for the achievement and the superior mesenteric artery isolation [13].

Based on our experience and from the studies we have carried out, we believe that in the surgical treatment of the pancreatic head tumor, the lymph nodes dissection is mandatory. Important are: the number of lymph nodes removed, the removal of the stations 14 and para-aortic lymph nodes; the removal of the fatty and lymphatic tissue that borders the rear margin of the pancreas from the medial margin of the superior mesenteric artery [13, 17, 18]. This surgical procedure should be considered indispensable if you want to get a radical exeresis (R0) [19, 20], which as we know, is the the most important parameter for the reduction of recurrence of the disease percentage within the first 24 months [21]. In our experience, we did not observe any postoperative diarrhea, as reported in the literature following extensive lymphadenectomy, above all of stations 16a and 16b.

The author report no proprietary or commercial interest in any product mentioned or concept discussed in this article.