Side-branch intraductal papillary mucinous neoplasms (side-branch IPMN) of the pancreas have a low malignant potential [1, 2]. The conventional treatment for this lesion, according to location, if there are signs of possible malignancy, has been pancreaticoduodenectomy (PD), total pancreatectomy (P), central pancreatectomy (CP) or distal pancreatectomy (DP). Despite advances reported in recent years, standard pancreatectomies still carry a significant postoperative mortality ranging from 1 % to 4 % [3]. These interventions are also associated with high postoperative morbidity and long-term disorders such as diabetes [4] and exocrine insufficiency [5, 6]. Less invasive surgery, including enucleation (EN) and resection of ucinate process (RUP), has been introduced for management of benign IPMN to preserve pancreatic function postoperatively and decrease postoperative mortality and morbidity [7, 8, 9, 10, 11, 12, 13, 14, 15]. However, recommendations and reports of postoperative complications and clinical outcomes following these procedures have been limited. The debate between PR and EN is still a challenge for surgeons. At our knowledge, this is the first meta-analysis to compare EN to PR for the treatment of side-branch IPMN.

This systematic review aimed to determine whether the EN is associated or not with a higher risk of mortality and morbidity compared to PR techniques for side-branch IPMN of the pancreas.

An extensive electronic search of the relevant literature was performed on August 15th, 2015 using the following databases: Medline, the Cochrane Library, Scopus, Embase and the Web of Science. Keywords used for the final search in all databases were: “intraductal papillary and mucinous neoplasms of pancreas”, “enucleation” and “resection”.

All relevant studies reporting a comparison between EN and PR, including pancreaticoduodenectomy (PD), total pancreatectomy, central pancreatectomy and distal pancreatectomy, to treat IPMN in adults, and published in English or French language in a peer-reviewed journal, were considered for analysis. Data from editorials, letters to editors, review articles and case series (less than ten cases) were excluded from analysis. Adults (age ≥18 years) of either sex operated on for IPMN were included.

The treatment group comprised patients who underwent an EN of side-branch IPMN.

The surgical procedure was left to the surgeon’s discretion, and no preference criterion was employed for the resection method to be used for all non-randomized studies.

The full publications of all possibly relevant abstracts were obtained and formally assessed for inclusion. All studies that met the selection criteria were assessed for methodological quality by two authors (WD, MK). To assess the quality of non-randomized trials we used the Methodological Index for Non-Randomized Studies MINORS [17]. The MINORS index contains 12 items, which are scored 0 (not reported), 1 (reported but inadequate), or 2 (reported and adequate). The ideal global score is 24 for comparative studies and 16 for non-comparative studies. Nonrandomized studies with a MINORS index higher than 12 for comparative studies were retained for analysis.

Heterogeneity among studies was assessed by means of the I2 inconsistency test and Cochran’s Q test, a null hypothesis test in which P<0.05 is taken to indicate the presence of significant heterogeneity. Selection biases were detected by funnel plots. Overall estimates of treatment effect with their 95 per cent confidence intervals (CI) were calculated using Mantel-Hansel method for fixed model. Results are presented in forest plots. All calculations were made using the Review Manager 5.1 software.

A total of 19 studies were identified from the search (Figure 1). According to the title or abstract, 10 studies were excluded because they did not meet the inclusion criteria: four were case reports or small case series, four were not related to EN for IPMN, one was an editorial and one was published in languages other than French or English. 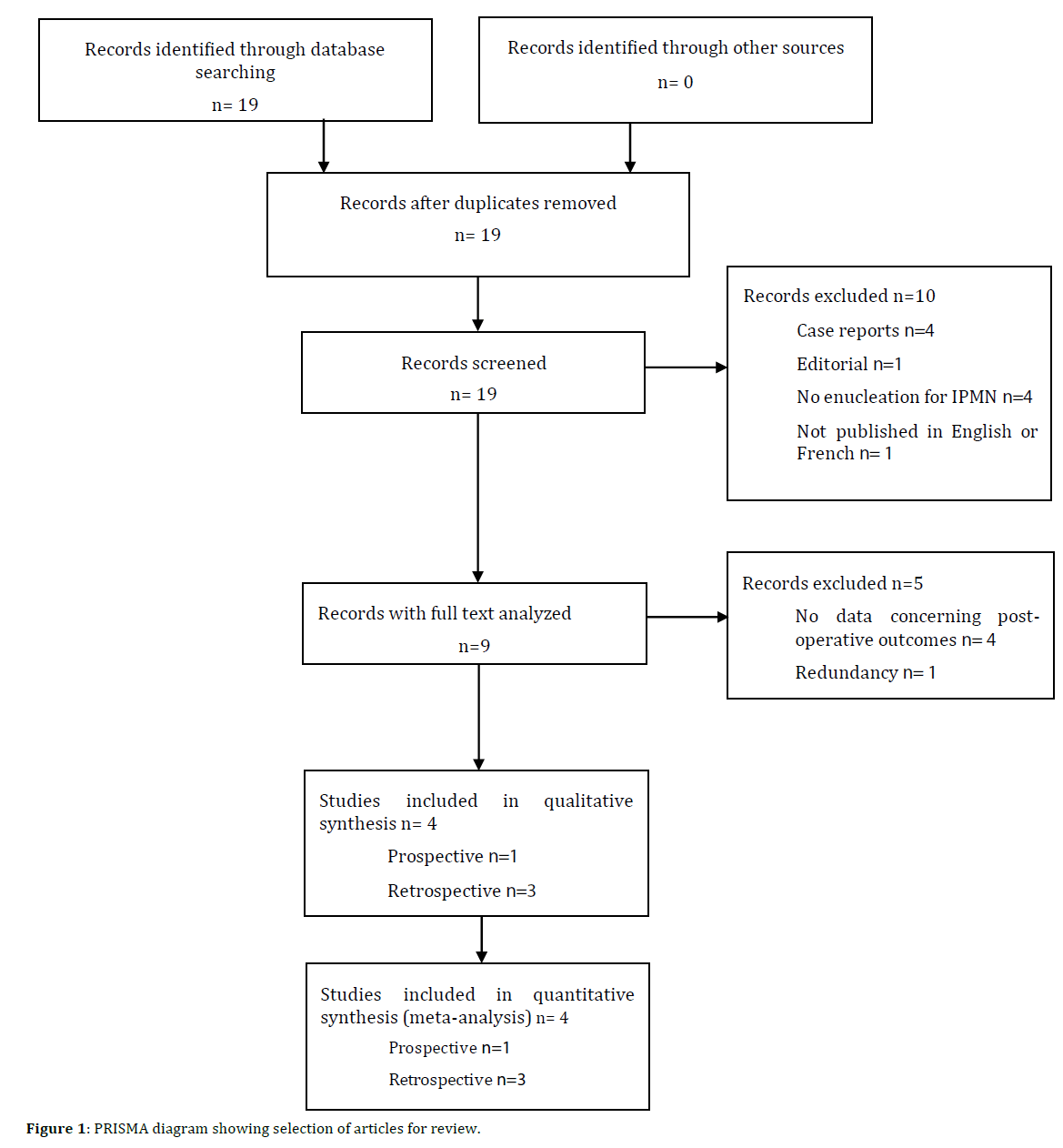 Nine studies were considered potentially relevant and the full text was sought after. Four studies were excluded because they did not report data concerning post-operative outcomes for patients who underwent EN. One study was excluded because of redundancy [11]. We retained four studies for final analysis [12, 13, 14, 15]. There were one non-randomized prospective study and three retrospective studies. The surgical procedure was left to the surgeon’s discretion. The characteristics of all included studies are listed in Table 1. The study flow diagram is presented in Figure 1. The results and data of selected studies are listed in Table 2.

Table 2. Data of the four studies retained in alphabetical order.

Mortality: Four studies comprising 213 patients (Figure 2) reported this outcome, comparing EN techniques with resections techniques [12, 13, 14, 15]. One decease was reported in the resection group. There was no difference in term of mortality rate in the EN group compared to control group (OR 0.21, 95% CI 0.01 to 5.25, p: 0.34). There was no bias of selection.

At our knowledge, this is the first meta-analysis to compare EN to PR for the treatment of side-branch IPMN. The debate between PR and EN is still a challenge for surgeons. All available articles included in this meta-analysis reported a small series or individual cases.

As concerns PR for side branch IPMN, despite advances reported in recent years, PR still provides a significant postoperative mortality and morbidity rates [3, 4, 5, 18, 19]. Limited pancreatic head resection (LPHR) was performed also for management of side-branch IPMN [7, 8]. This technique does not necessitate anastomosis between the pancreatic duct, bile duct and the bowel. A disadvantage of LPHR was the higher rate of pancreatic fistula [7].

As concerns EN, several studies have shown the feasibility of this technique for treatment of side-branch IPMN with less mortality [10, 11, 20, 21, 22] and morbidity rates [10, 20, 21]. The benefit of EN, in terms of mortality and morbidity, is balanced by the increased risk of recurrence [13]. Blanc reported a series of 31 patients operated on for side-branch IPMN who had an EN with nil mortality rate; on the other hand there were high post-operative pancreatic fistula and recurrence rates respectively 54% and 15% [11]. Faitot reported, in 2015, a series of 38 patients who had an EN for side-branch IPMN [22]. Overall mortality was 0.8% and morbidity 63%, mainly owing to pancreatic fistula (57%) [22]. Reoperation rate was 3%, mainly owing to hemorrhage. Postoperative de novo diabetes was 0.8%, and exocrine insufficiency never observed. The 1-, 3-, and 5-year recurrence-free survival were 100%, 98%, and 93%, respectively [22].