Autoimmune pancreatitis is a rare benign fibroinflammatory cause of chronic pancreatitis. It most commonly presents with obstructive jaundice from narrowing of the intrapancreatic bile duct due to focal or diffuse enlargement of the pancreas. Diagnosis is a combination of histological features, imaging and serum markers. Differential diagnosis includes pancreatic or biliary cancer. Autoimmune pancreatitis is a multifocal systemic disease. The most common pulmonary involvement is hilar lymphadenopathy occurring in up to 83% of cases. Pulmonary nodules have also been described [1].

A 62-year-old previously healthy man presented with epigastric pain and pruritus. He had pale stools and dark urine. There was no relevant past medical history and physical examination was unremarkable. Serum bilirubin (81 μmol/L; reference range: 9-21 μmol/L), alkaline phosphatase (1,722 IU/L; reference range: 150-300 IU/L) and CA 19-9 (45 IU/L; reference range: 0-33 IU/L) were all elevated. Computerised tomography (CT) revealed a mass in the head of pancreas and multiple lung nodules, thought at the time to be consistent with metastatic pancreatic cancer. This was presumed to be inoperable, the patient underwent endoscopic retrograde cholangiopancreatography (ERCP) with insertion of a metal stent into the bile duct. Cytology taken at the time of ERCP showed small intestinal type mucosa fragments with chronic inflammatory changes, but no evidence of malignancy. Subsequent endoscopic ultrasound revealed coeliac lymphadenopathy, but fine needle aspiration was again negative for malignancy.

In addition to the multiple pulmonary nodules seen on CT, bilateral lower lobe collapse associated with plural effusions was identified (Figure 1). This was investigated by the respiratory physicians and was managed conservatively in the first instance as the patient was asymptomatic. A repeat CT scan six weeks later demonstrated that both the areas of lower lobe collapse and effusion and pulmonary nodules had resolved spontaneously. This raised questions over the presumptive diagnosis of metastatic pancreatic carcinoma. 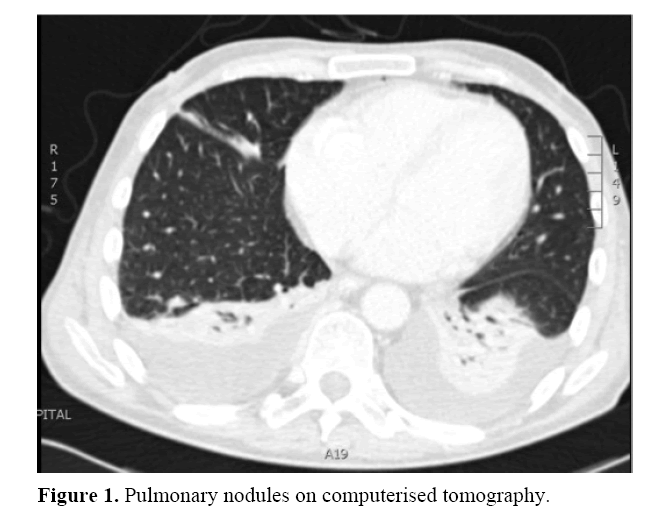 The patient was then referred for continuing management. Review of the imaging showed that the pancreas was initially globally oedamatous. The repeat CT scan has shown that this had improved. A diagnosis of autoimmune pancreatitis was therefore considered. IgG4 was elevated at 15.6 g/L (reference range: 0.08- 1.4 g/L), supporting the diagnosis of autoimmune pancreatitis.

At the same time the patient developed ascending cholangitis, secondary to stent occlusion. A repeat ERCP failed and the patient was consented for a hepaticojejunostomy. At surgery tru-cut biopsies of the head of the pancreas were taken and histopathology confirmed the diagnosis of autoimmune pancreatitis. Analysis of the biopsy demonstrated intense inflammatory cell infiltration with plasma cells and neutrophils, there was no evidence of neoplasia. Postoperatively the patient was commenced on 40 mg prednisolone, with a tapering dose of 5 mg per week for the now presumed diagnosis of autoimmune pancreatitis. Post-operative magnetic resonance cholangiopancreatography (12 weeks) demonstrated resolution of the pancreatic mass, with improvement in IgG4 levels. At 30 months the patient remains well.

Autoimmune pancreatitis is rare cause of pancreatitis with overall incidence reported to be from 1.9 to 6.6% [2]. Extrapancreatic signs and symptoms occur in up to 49% of cases [3], which include biliary strictures, sclerosing cholangitis, hilar or abdominal lymphadenopathy and interstitial nephritis. The most common pulmonary lesion associated with autoimmune pancreatitis is hilar lymphadenopathy. Other pulmonary complications described include interstitial fibrosis, honeycomb changes and discrete pulmonary nodules [1, 4].

The presence of obstructive jaundice with biliary stricture and a focal mass often leads the clinician towards a diagnosis of pancreatic or biliary cancer. Pancreatic cancer is often diagnosed on radiological appearances, without histological backup. In a series of 442 cases, where resection was performed for pancreatic cancer based on radiology alone, 2.5% of the resected cases were actually diagnosed as autoimmune pancreatitis on histology [5]. In our case two attempts were made to obtain histology, unsuccessfully, and in the setting of pulmonary ‘metastases’ a presumed diagnosis of advanced pancreatic cancer was made.

In our case questions over the diagnosis were raised when the discrete pulmonary nodules spontaneously resolved without systemic steroid treatment. Spontaneous resolution of other extrapancreatic pathology has been reported. Schmassmann et al. reported complete resolution of sclerosing cholangitis without the need for steroids [6].

Histologically autoimmune pancreatitis is characterised by lymphoplasmacytic inflammatory cell infiltrates with fibrosis around large and medium sized interlobular ducts [7], differentiating it from other causes of pancreatitis and pancreatic cancer.

Diagnostic criterion combining histology, serum markers and radiological features were first proposed by the Japanese [8] in an attempt to differentiate pancreatic cancer from benign causes of pancreas pathology. These criterions have developed over time, and now include response to steroid therapy [9].

Treatment with corticosteroids can often be dramatic with symptom control of pancreatic and extra pancreatic manifestations within weeks and radiological improvement over the same time period [10]. Treatment is recommended to commence at 40 mg and tapered at 5 mg a week. In some cohorts maintenance steroids may be required. A poor response to corticosteroids may suggest another diagnosis.

In summary, in patients who present with pancreatic lesions, with extrapancreatic features, autoimmune pancreatitis should be considered, based on a combination of investigations. A correct diagnosis can prevent unnecessary intervention and potential morbidity and mortality from an operation. In those cases where diagnosis is uncertain a trial of steroids may be helpful to see if there is any response in signs and symptoms. However, as in our case, extrapancreatic lesions may resolve without the use of steroids.