Spontaneous Rupture of the Bile Duct Associated with Pancreatitis. A Rare Presentation

Context Spontaneous rupture of the bile duct, although rare, has been described as a known surgical cause of jaundice in infancy after biliary atresia. Case report This article describes a four-year-old girl who presented with severe abdominal pain and features suggestive of acute pancreatitis, who developed gradual distension of the abdomen, and was found to have a ruptured bile duct, producing biliary peritonitis. She was managed with laparoscopic drainage of the peritoneal cavity. However, in view of the persistent biliary drainage, an ERCP was performed followed by stent placement for a bile duct leak. She was subsequently diagnosed as having a choledochal cyst. Conclusion A high index of suspicion, appropriate investigation, such as MRCP, combined with early drainage can help in reaching an early diagnosis, and reduced morbidity and mortality in this rare disorder.

Spontaneous rupture of the bile duct is a rare clinical situation. It is, however, a potentially fatal complication. The disease is more common in children than in adults. Several mechanisms have been proposed regarding its etiology. We describe a child who had an unusual presentation and was successfully managed with laparoscopic drainage followed by ERCP.

A 4-year-old girl who was otherwise well, presented at the emergency ward of a different centre in our city having had acute abdominal pain associated with obstipation for 3 days. She was found to be very ill, anicteric and dehydrated. She was rehydrated with fluids. Investigations revealed that her liver function was normal; however, her serum amylase level was 906 IU/L (reference range: 25-125 IU/L), and her lipase level was 451 IU/L (reference range: 22-51 IU/L); her total leucocyte count was 12,700 μL-1 (reference range: 4,000-10,000 μL-1) with predominant neutrophilia. Her CRP was 102 mg/dL (reference range: 0-6 mg/dL) and serum calcium was 7.5 mg/dL (reference range: 8.4-10.2 mg/dL). MRCP showed a bulky pancreas and a normal, non-dilated biliary system (Figure 1). She was managed therapeutically as a case of acute pancreatitis. However, she continued to have pain and developed fever and distension of the abdomen from the 4th day of her admission. She was found to be very toxic. Her leucocyte count rose to 24,900 μL-1 with 96% neutrophils. Amylase and lipase on day 4 increased additionally to 1,300 IU/L and 2,957 IU/L, respectively. Abdominal ultrasonography showed massive ascites and an ascitic fluid examination showed it to contain bile with bile salts and bilirubin. Laparoscopic drainage of the ascitic fluid was carried out with a thorough peritoneal lavage with warm normal saline and a peritoneal drain was inserted. Abdominal distension decreased but, even on 10th postoperative day, she continued to have a large amount of bilious ascitic fluid draining from the peritoneal drain. Fever persisted in spite of receiving broad spectrum antibiotics. She was referred to our centre for further management. We performed an ERCP under anesthesia (Olympus TJF160 endoscope, Singapore, Singapore) which showed evidence of a bile leak from the middle part of the common bile duct, although the duct was not well delineated (Figure 2). The intrahepatic radicles were, however, not dilated. An endoscopic sphincterotomy was carried out and a biliary stent (7 Fr in diameter, 9 cm in length) was placed across the leak site into the left intrahepatic duct. 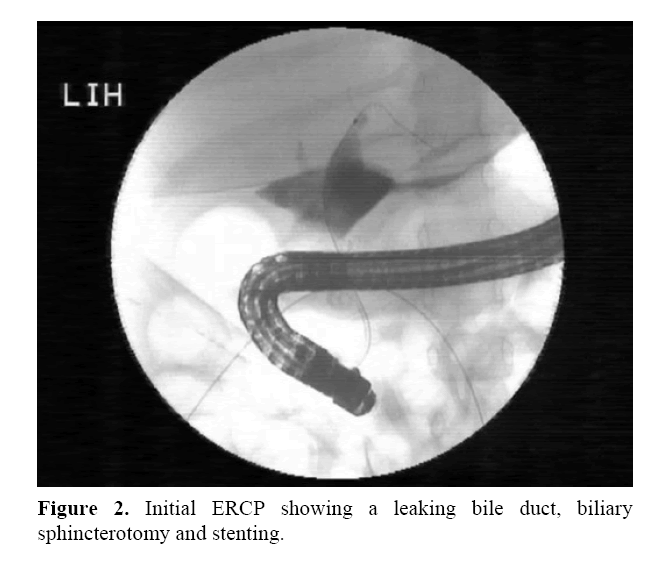 From the second post-ERCP day, her fever started to normalize The amount of bilious drain fluid decreased and, on day 5 after the ERCP, the peritoneal drainage tube was removed. Amylase and lipase levels became normal and, after 7 days, the fever subsided. A repeat ultrasonography 2 weeks later was normal except for mild dilatation of the bile duct. ERCP was carried out 4 weeks later and the stent was removed. A cholangiogram showed a fusiform dilation of the upper two-thirds of the bile duct with no evidence of a leak (Figure 3). The intrahepatic biliary radicles were normal. A repeat MRCP also showed a choledochal cyst (Figure 4). The child has been doing well and surgery for the choledochal cyst is planned for a later date. Figure 3. Subsequent ERCP showing a choledochal cyst. The stent has been removed. REVIEW OF THE LITERATURE

Spontaneous bile duct perforation is not a common clinical entity. It was first described by Dijkstra in 1934 [1]. Since then, about 60 cases have been described in children [2]. It is most common in infancy, and occurrence as early as 25 weeks of gestation has been cited in the literature [3]. Median age at presentation is 4 years with a peak age of presentation at 6 months. The presenting symptoms are usually abdominal distension and/or jaundice. Our patient also had abdominal distension but was anicteric. Moreover, the present case had biochemical (raised amylase and lipase) and imaging evidence of acute pancreatitis; whether acute pancreatitis precipitated the rupture or vice versa is difficult to say. A presentation of acute pancreatitis and the occurrence of bile duct perforation after an attack of pancreatitis has rarely been described in children. Rupture of the right hepatic duct associated with a choledochal cyst following acute pancreatitis, however, has been described earlier in two children [4]. Rupture of the bile duct is often associated with pancreaticobiliary malunion with or without a choledochal cyst [5, 6]. Both these disorders are known to have distal bile duct stenosis and intrinsic bile duct wall weakness. In patients with pancreaticobiliary malunion, the junction of the pancreatic duct and the bile duct is situated outside the duodenal wall containing the sphincter of Oddi [5]. Pancreatic juice refluxing into the dilated bile duct is activated by mixing with bile and causes acute inflammation and microabscess formation on the wall, eventually causing perforation. However, in a choledochal cyst, bile duct rupture has been attributed to congenital mural weakness, usually at the junction of the cystic duct and the common bile duct, as well as to viral infections or an ischemic etiology. The present case had a choledochal cyst as the underlying mechanism.

Initial imaging, including the MRCP carried out in our case, missed the diagnosis of a choledochal cyst. This could possibly be explained by transient biliary decompression due to bile leaking into the peritoneal cavity [7].

Spontaneous rupture of the bile duct is usually treated by peritoneal drainage along with laparoscopic or open T tube drainage of the bile duct. In patients with pancreatobiliary malunion and a choledochal cyst, definitive surgery with biliary resection and a biliointestinal bypass is usually required. Of the 60 cases recently reviewed [2], 57 were treated surgically (drainage alone in 46, biliary reconstruction in 11); ERCP was carried out in two and expectant treatment in one. ERCP for treating a bile duct rupture was used for the first time in 2006. Barnes et al. [8] described a patient with a rupture at the junction of the cystic duct and the common hepatic duct associated with choledocholithiasis. The patient was treated using ERCP to remove stones along with the placement of a biliary stent. However, ERCP failed to be curative in another report where cholangitis and cholecystitis had developed in the setting of bile duct rupture [9]. That patient was thereafter managed by laparotomy. Our patient had a rapid recovery from the acute event after ERCP, a biliary sphincterotomy and stenting. ERCP in the present case was used both for confirming the bile duct rupture and as a therapeutic modality. ERCP is now a well-established treatment for biliary leaks following cholecystectomy and our unit has had notable experience with this procedure. We therefore performed ERCP rather than a more invasive surgical correction of the biliary disruption or surgical placement of a T tube.

In summary, we have described the rare situation of a choledochal cyst rupture associated with features of acute pancreatitis which was treated effectively by ERCP and biliary endotherapy.