Synchronous Triple Cancers of the Pancreas, Stomach, and Cecum Treated with S-1 Followed by Pancrelipase Treatment of Pancreatic Exocrine Insufficiency

Context Pancreatic cancer is frequently complicated by malignancies in other organs. However, synchronous triple cancersincluding pancreatic cancer have been seldom reported in the English language literature. Case report We describe the rare case of a 77-year-old man with triple cancers of the pancreas, stomach, and cecum. Biopsies revealed that all three tumors were adenocarcinomas. The pancreatic and gastric tumors were positive for cytokeratin 7 and negative for cytokeratin 20, whereas the cecal tumor was negative for cytokeratin 7 and positive for cytokeratin 20. K-ras mutations were present at codon 12 in the pancreatic tumor and at codon 13 in the cecal tumor, but were absent from the gastric tumor. Since the three tumors had different characteristics, the patient was diagnosed with synchronous triple cancers. Because invasive surgery was required to remove all three tumors and the patient had risk factors for surgery, we elected to treat him with chemotherapy. All three cancers were markedly reduced in size by treatment with cycles of 100 mg/day S-1 for 2 weeks,followed by a 1-week rest. The patient later developed hypoproteinemia and anasarca, which was diagnosed as pancreaticexocrine insufficiency due to pancreatic head cancer. Treatment with pancrelipase resulted in dramatic improvements inhypoproteinemia and anasarca. Conclusions This is the first case report in which S-1 was effective in triple cancers of thepancreas, stomach, and cecum. Patients with pancreatic head cancer should be monitored for pancreatic exocrineinsufficiency.

Pancreatic cancer is frequently complicated by malignancies in other organs [1]. However, to date a case of synchronous triple cancers of the pancreas, stomach, and cecum has not been reported in the English language literature.

Although gemcitabine-based chemotherapy has been widely employed to treat pancreatic cancer [2, 3], a recent clinical trial demonstrated that S-1 was non-inferior to gemcitabine in these patients [4]. S- 1-based chemotherapy is the standard first-line treatment in Japan for patients with advanced gastric cancer [5, 6]. In addition, S-1 may become a chemotherapeutic option in metastatic colorectal cancer [7].

We describe here a patient with synchronous triple cancers of the pancreas, stomach, and cecum, who was effectively treated with S-1. Subsequent malabsorption syndrome due to pancreatic exocrine insufficiency was improved by pancreatic enzyme replacement therapy.

A 77-year-old man was referred to our hospital after abdominal ultrasonography showed a mass on the pancreatic head 25 mm in diameter. He had a long-term history of diabetes mellitus, but no previous or family history of malignancy. Although his diabetes mellitus had been controlled by medication, his blood glucose concentration increased rapidly. He was a heavy smoker (40 cigarettes/day for 50 years). His Karnofsky performance score was 100%. His height, weight, and body surface area were 162 cm, 55 kg, and 1.59 m2, respectively.

Computed tomography (CT) showed a pancreatic head mass 22 mm in diameter, accompanied by invasion of the superior mesenteric vein (Figure 1a). Upper gastrointestinal endoscopy showed a gastric tumor in the middle part of the stomach (Figure 1b), and lower gastrointestinal endoscopy and CT showed a cecal tumor (Figure 1cd). An endoscopic ultrasonography-guided fine needle aspiration (EUS-FNA) biopsy of the pancreatic head mass showed that it was an adenocarcinoma (Figure 2a), while biopsies of the gastric and cecal tumors revealed that both were well to moderately differentiated adenocarcinomas (Figure 2bc). The biopsies of the pancreatic and gastric tumors were positive for cytokeratin (CK) 7 and negative for CK20, whereas the cecal tumor was negative for CK7 and positive for CK20 (Figure 2defghi). Dual color in situ hybridization showed that the gastric tumor was positive for human epidermal growth factor receptor 2 (HER2/neu). K-ras mutations were observed in the pancreatic (glycine to valine at codon 12) and cecal (glycine to aspartic acid at codon 13) tumors, but not in the gastric tumor. Positron emission tomography revealed accumulating spots at all 3 sites, while no definite metastases were verified. Since the three tumors had different immunohistochemical and genetic characteristics, the patient was diagnosed with synchronous triple cancers of the pancreas, stomach, and cecum. The pancreatic tumor was classified as T3N0M0 and stage IIA, the gastric cancer as T2bN0M0 and stage IB, and the cecal tumor as T3N0M0 and stage IIA [10], respectively. 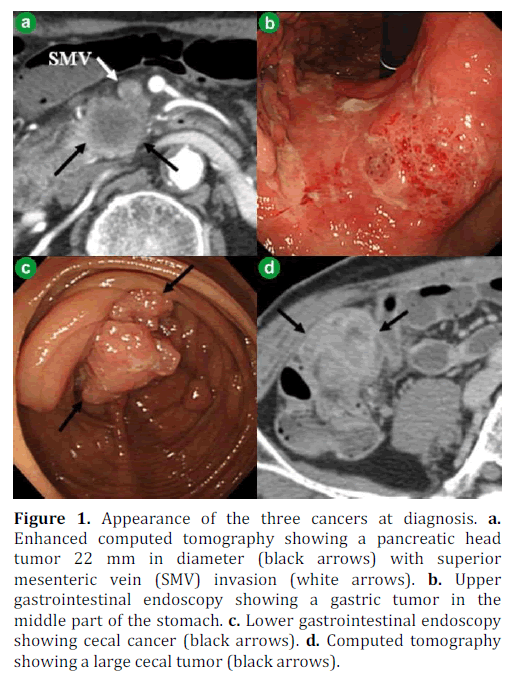 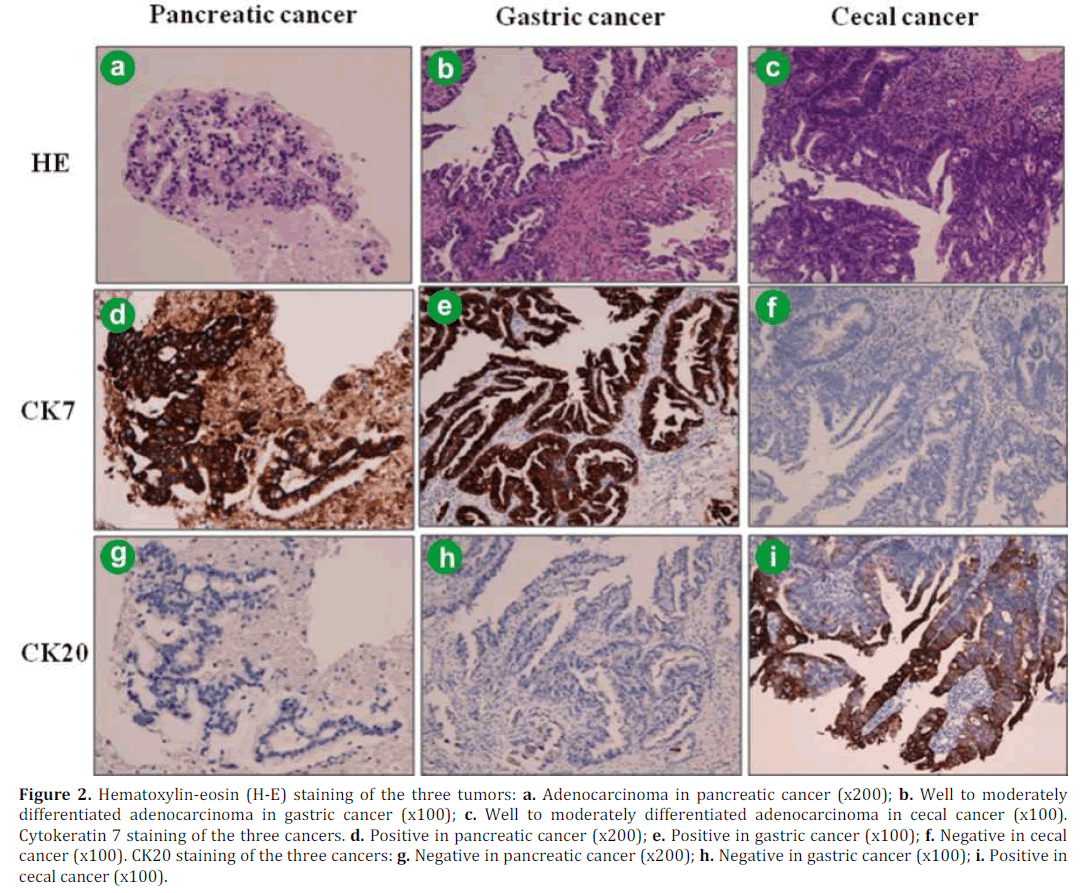 Because invasive surgery, including resection of the portal venous system, was required to remove all three tumors and the patient had risk factors for surgery, including older age and diabetes mellitus, we elected to treat him with chemotherapy. He was treated with cycles of 100 mg/day S-1 (TS-1, Taiho Pharmaceutical Co., Ltd., Tokyo, Japan) for 2 weeks, followed by a 1-week rest; the dose of S-1 had been reduced from 120 mg/day to 100 mg/day because of his older age. After 4 cycles of S-1 chemotherapy, the pancreatic head tumor decreased from 22 mm to 10 mm in diameter (Figure 3a), or 55% according to the Response Evaluation Criteria in Solid Tumors (RECIST) [11]. Upper gastrointestinal endoscopy and CT showed marked reductions in size of the gastric and cecal tumors, respectively (Figure 3bc). DUPAN-II was markedly reduced from 5,750 U/mL to 1,550 U/mL (Figure 4). The patient experienced no definite adverse effects of S-1, according to the Common Terminology Criteria for Adverse Events (CTCAE) version 4.0 [12].

Figure 3. Effects of S-1 chemotherapy on the three tumors. a. Enhanced computed tomography showing that the pancreatic head tumor had decreased from 22 mm to 10 mm in diameter (black arrows). b. Upper gastrointestinal endoscopy showing marked decrease in the size of the gastric tumor. c. Computed tomography showing markedly decrease in the size of the cecal tumor (black arrows). 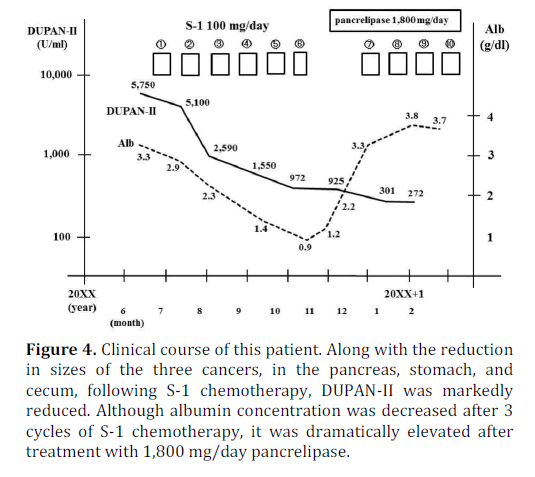 Figure 4. Clinical course of this patient. Along with the reduction in sizes of the three cancers, in the pancreas, stomach, and cecum, following S-1 chemotherapy, DUPAN-II was markedly reduced. Although albumin concentration was decreased after 3 cycles of S-1 chemotherapy, it was dramatically elevated after treatment with 1,800 mg/day pancrelipase.

Based on these findings, as well as decreased food intake, nephrotic syndrome due to diabetic nephropathy and protein-losing gastroenteropathy due to gastric and cecal cancers were excluded as the causes of malnutrition. In addition, cachexia due to triple cancers was unlikely, since the sizes of all three tumors had decreased. We suspected malabsorption syndrome due to pancreatic exocrine insufficiency, because CT showed atrophic distal pancreas due to pancreatic head cancer and decreased pancreatic exocrine function. We therefore treated this patient with 1,800 mg/day pancrealipase (LipaCreon, Abbott Japan Co., Ltd., Tokyo, Japan), an enteric-coated, delayed-release pancreatic enzyme. Four weeks later, his serum total protein, albumin, retinol-binding protein and prealbumin concentrations had markedly increased to 6.2 g/dL, 3.3 g/dL, 4.3 mg/dL, and 27 mg/dL, respectively (Figure 4). Subsequently, anasarca was dramatically improved. No definite adverse effects of pancrealipase were observed.

Immunohistochemical assays of CK7 and CK20 in our patient were compatible with pancreatic, gastric, and cecal cancers [15]. K-ras mutations are frequently observed in pancreatic and colonic cancers, but not in gastric cancer. Almost all K-ras mutations in pancreatic cancers are located at codon 12, not at codon 13 [16, 17]. We observed Kras mutations in two of the tumors, at codon 12 in the pancreatic tumor and at codon 13 in the cecal tumor, but no K-ras mutation in the gastric tumor. Our patient was therefore diagnosed with synchronous triple cancers of the pancreas, stomach, and cecum, not with pancreatic metastasis from gastric or cecal cancers. We treated this patient with chemotherapy rather than surgery, because invasive operations, including resection of the portal venous system, were needed to remove all three tumors and the patient had risk factors for surgery, including older age and diabetes mellitus.

S-1 is an oral anticancer drug, consisting of tegafur, a prodrug of 5-fluorouracil, 5-chloro-2,4- dihydroxypyridine (CDHP) and potassium oxonate [18], with CDHP and potassium oxonate improving the tumor-selective toxicity of 5-FU [19, 20]. S-1 has been used to treat patients with gastric, colorectal, lung, laryngeal, breast, pancreatic, and biliary cancers in Japan. In early and late phase II trials, S-1 achieved complete or partial responses in 4 of 19 (21.1%) and 15 of 40 (37.5%) patients with metastatic pancreatic cancer, respectively [21, 22]. Although gemcitabine-based chemotherapy has been widely employed to treat pancreatic cancer throughout the world [2, 3], a recent clinical trial demonstrated that S-1 was non-inferior to gemcitabine in patients with advanced, unresectable pancreatic cancer [4]. In addition, S-1 was found to be non-inferior to 5-FU in patients with unresectable or recurrent gastric cancer. Moreover, being orally administered, S-1 could replace 5-FU [5]. S-1 plus cisplatin was found to be superior to S-1 alone in patients with gastric cancer [6], and S-1 plus cisplatin has been regarded as the standard first-line treatment for patients with advanced gastric cancer in Japan. S-1 treatment induced partial responses in 15 of 38 (39.5%) patients with metastatic colorectal cancer [7], suggesting that S-1 may become a chemotherapeutic option in patients with this condition.

There has been only one case report of patients with double pancreatic and gastric cancers, who were treated with chemotherapy with S-1, paclitaxel and lentinan [23]. We treated our patient with S-1 due to its efficacy in patients with cancers of the pancreas, stomach, and cecum and its relatively mild adverse effects, finding that S-1 decreased the sizes of all three tumors. To our knowledge, this is the first case report in which S-1 was effective in triple cancers of the pancreas, stomach, and cecum.

In conclusion, we have described a rare case of synchronous triple cancers of the pancreas, stomach, and cecum. S-1 was effective in this patient, with subsequent malabsorption syndrome due to pancreatic exocrine insufficiency improved by treatment with pancrelipase.

The authors state that they have no conflict of interest