Three transgenic CK6/ECFP mice were acquired from the Jackson Laboratory (Stock No. 003773; Bar Harbor, ME, USA) which are derived from founder lines first developed by the laboratory of Dr. Andras Nagy of the Samuel Lunenfeld Research Institute, Mount Sinai Hospital, Toronto, Canada [4]. These mice express CFP under the control of the chicken beta-actin promoter coupled with the cytomegalovirus immediate early enhancer. Three control C57BL/6J nonfluorescent mice were also studied. The mice were bred in the vivarium at AntiCancer, Inc. (San Diego, CA, USA).

Transgenic CK6/ECFP mice and control C57BL/6J non-fluorescent mice were maintained in a barrier facility on high efficiency particulate air (HEPA)- filtered racks. The animals were fed with autoclaved laboratory rodent diet (Teckland LM-485, Western Research Products, Orange, CA, USA). Necropsy and imaging were performed on 6-week-old female mice after they were euthanized with intramuscular injection of 0.05 mL of a solution of 50% ketamine, 38% xylazine, and 12% acepromazine maleate, followed by cervical dislocation.

Six-week-old female mice were sacrificed in the manner reported above before performing a complete necropsy. Hair on their back was removed with Nair lotion (Church & Dwight Co., Inc., Princeton, NJ, USA). Necropsy was performed via a midline laparotomy incision that was extended along the sternal border to enter the thoracic cavity. The gastrointestinal tract was isolated and removed en bloc from the abdominal cavity, from the esophagus to the rectum. Subsequently, the spleen, pancreas, and stomach were separated from the small and large bowel. Next, all major organs were harvested individually.

All animal studies were conducted in accordance with the principles and procedures outlined in the NIH Guide for the Care and Use of Animals.

Fluorescence intensity was expressed as arbitrary units and was reported as mean±SD. Fluorescence intensity was compared between the pancreas and the other organs by means of the paired Student-t test. The SPSS (version 13.0 for Windows; SPSS Inc., Chicago, IL, USA) was used for the statistical analysis and the significance level was chosen at a 0.05 two-tailed Pvalue.

The CK6/ECFP mice express the cyan fluorescent protein, which is discernable at the lower end of the visible light wavelength spectrum (370-475 nm), with the excitation peak and emission peak at 433 nm and 475 nm, respectively. All images were obtained in pairs, with a brightfield image obtained in the Olympus OV100 Small Animal Imaging System and a fluorescent image obtained in the UVP iBox under the CFP filter (Figure 1). Three CK6/ECFP mice were sacrificed for this analysis. 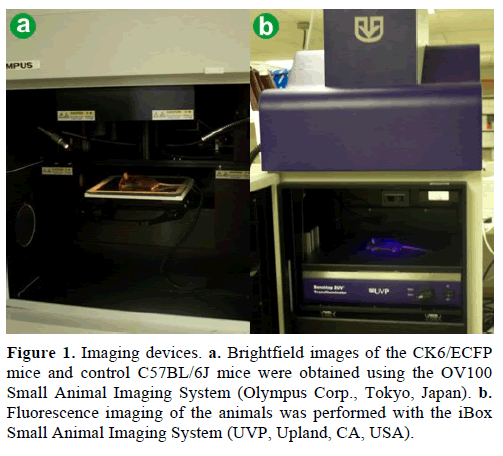 For the purpose of comparison, three control non-CFP mice were also sacrificed, necropsied, and imaged in the exact same manner and sequence. As expected, none of the control mice displayed any fluorescence.

The following results pertain to the CK6/ECFP mice only: a) whole body imaging revealed that the skin of the mouse displayed blue fluorescence, but the hair did not (Figure 2ab); b) however, upon initiation of the necropsy, to our surprise, we observed a marked difference in the level of fluorescence between organs in the CFP mouse (Figure 2cd); c) immediately, it was apparent that the peritoneum and the pancreas very strongly expressed the cyan fluorescent protein, along with the thigh muscles; d) the pancreas, in fact, stood out in stark contrast to the fairly dark background made up by the rest of the GI tract.

Figure 2. Brightfield and fluorescent images of the mouse before and during necropsy. The CK6/ECFP mouse was imaged with both brightfield and fluorescence filters throughout the study. The mouse’s hair was removed, and whole body imaging shows that the skin, including that on the ears, expressed cyan fluorescence, while the hair did not (a. and b.). Necropsy of the mouse with exposure of the abdomen and thoracic cavities immediately allowed visualization of differential fluorescence among the organs, with the brightest signals coming from the pancreas (arrow), thigh muscles, peritoneum, and pleural covering (c. and d.).

Proceeding with the necropsy, we first removed the entire gastrointestinal tract, including the spleen and pancreas, en bloc, from the esophagus to the rectum (Figure 3). The GI tract was then imaged. As can be seen in Figure 3, the pancreas was obviously much more fluorescent than the rest of the GI tract. The GI tract was then separated into the spleen, stomach, pancreas, and bowel Next, we performed a complete necropsy, whereby we harvested the following additional organs for imaging: kidneys and adrenals, liver, heart, lungs, thymus, brain, peritoneum, thigh muscle, ribcage, sternum, and spine (Figure 4). Imaging with the CFP filter revealed differential fluorescence among the organs, with the peritoneum, pancreas, and muscle displaying much stronger signals than the rest of the organs, including the liver and lungs. Interestingly, the ribcage, spine, and sternum also displayed some degree of enhanced fluorescence. Likewise, fluorescence of the stomach was most notable along its greater curvature towards the duodenum. Analysis of the images with the Image-J software allowed quantification of the fluorescence intensity, which was then converted into a bar graph (Figure 5) where a clear difference is discernable. The pancreas displays much greater fluorescence than the other organs of the GI tract although not reaching statistical significance due to the low number of animals and the high variability observed among the different mice; its fluorescence intensity, on average, was 113.0±60.3 arbitrary units. By comparison, the fluorescence intensity for the spleen was 7.1±0.7 (P=0.092), the liver 10.8±2.2 (P=0.096), the lungs 10.9±0.8 (P=0.100), the stomach 45.1±14.1 (P=0.126), and the intestines 25.5±2.2 (P=0.121). 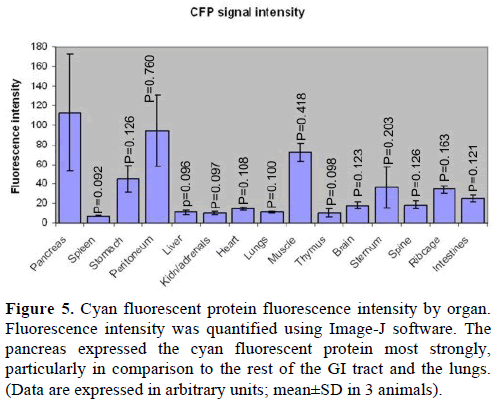 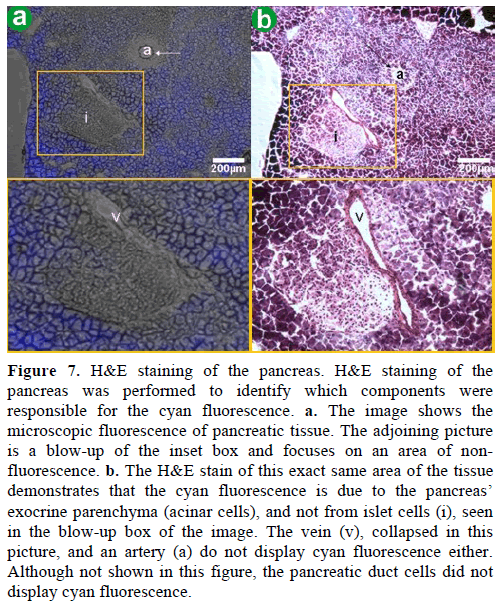 Fluorescent proteins offer the advantages of colorcoding cells and proteins, permitting identification of the different cellular components of tissues as well as proteins, and organelles within cells. With fluorescent proteins, even single molecules can be imaged in cells [5]. Up to now, fluorescence imaging has been limited by a fairly narrow range of color choices, relying mainly on the GFP and RFP, which can, for example, be combined in a single cell to develop dual colored cells, with each protein coloring either the cytoplasm or the nucleus [6] or be used to color code cell-cell interaction [7, 8]. Although CFP has been available, its use has been limited due to its short wavelength. CFP has been mostly directed to Förster resonance energy transfer (FRET) [9]. The UVP iBox imaging system now allows us to conveniently use this protein because it possesses a narrow range CFP filter that does not spill into the GFP or RFP wavelengths.

Hadjantonakis et al. first developed the ECFP (enhanced cyan fluorescent protein) transgenic mouse using the ECFP gene which is a spectrally-distinct color variant of wild type Aequorea victoria GFP [4]. These transgenic mice were bred to generate homozygotes and reported to express fluorescence in all cell types, except erythrocytes and adipocytes. As reported here, we observed that there is a markedly differential expression of the CFP among the organs of the CK6/ECFP mouse. Of particular interest, the pancreas was by far the most fluorescent of all intraabdominal organs. The basis of the enhanced fluorescence of the pancreas is as yet unclear and should be the subject of further study. It is possible that the activity of the beta-actin promoter is highest in the pancreas. Nevertheless, our serendipitous finding should allow for the development of color-coded imaging studies of pancreatic function and pathology by breeding our model with currently available colorcoded imaging models. For instance, Hara et al. [10] previously developed a model of dual-colored pancreas, where the beta-cells can be genetically engineered to express a fluorescent protein that allows their differentiation from the rest of the pancreas. The application of this technology to the CFP mouse would yield an ideal tool to specifically study differences in function and responses to pathology between the endocrine and exocrine components of the pancreas. Likewise, our laboratory has previously published models for color-coded imaging of the tumor microenvironment and tumor-host interactions [7, 8, 11, 12]. In this context, the CFP mouse would add yet another color to our armamentarium for color-coding tumor-host interactions in the case of pancreatic cancer.