Survival for patients with pancreatic adenocarcinoma remains poor. Five-year overall survival (OS) for resectable disease treated with surgery only was 5% at the time of the Gastrointestinal Tumor Study Group (GITSG) trial [1]. Since then, several key trials have sought to identify the optimal adjuvant therapy after curative resection of pancreatic cancer.

The GITSG trial was closed early due to poor accrual. Prior to closure, it randomized patients with pancreatic adenocarcinoma resected to negative margins to 40 Gy delivered with 2 Gy daily fractions with a split course (2 week break after the first 20 Gy were delivered) with concurrent 5-FU chemotherapy versus observation alone. Five-year OS was 15% vs. 5% and median disease-free survival (DFS) was 11 vs. 9 months, both favoring the adjuvant chemoradiotherapy arm [1]. After this trial, adjuvant chemoradiotherapy (CRT) became the standard of care in the United States.

The Radiation Therapy Oncology Group (RTOG) 97- 04 sought to identify any role for gemcitabine as part of adjuvant treatment in resected disease. Patients with resected pancreatic adenocarcinoma were randomized to one of two adjuvant arms. Arm 1 consisted of pre-and post-CRT 5-FU, the concurrent segment of treatment being 5-FU based. Arm 2 consisted of pre-and post-CRT gemcitabine with the concurrent segment of treatment being 5-FU based. Radiation was delivered to 50.4 Gy using conventional fractionation without a pre-designed treatment break. Univariate analysis showed no difference in OS. Patients with tumors of the pancreatic head, however, had a 5-yr OS of 22% vs. 18% favoring the gemcitabine arm. On multivariable analysis, patients in the gemcitabine arm with pancreatic head tumors had an OS benefit which trended towards statistical significance (p=0.08) [2]. Thus, the location of tumor in pancreatic cancer seemed to have potential influence on outcome.

European trials have offered conflicting results when compared to American work. European Organisation for Research and Treatment of Cancer (EORTC) 40891 attempted to repeat the findings of GITSH. EORTC 40891 randomized resected patients to either adjuvant 5-FU based chemoradiation to 40 Gy using conventional fractionation or to observation. No statistically significant benefit was found for adjuvant therapy as measured by 2-yr OS or 5-yr OS [3]. The EORTC reported again with 10-years of follow-up; 10-yr OS was 17% for the adjuvant arm while 10-yr OS was 18% for the observation arm (not a statistically significant difference) [4].

In this setting of conflicting evidence and controversy, the National Comprehensive Cancer Network (NCCN) recommends that either adjuvant CRT or adjuvant chemotherapy alone are appropriate, regardless of resection status.

Thus, the utility of adjuvant external beam radiotherapy (EBRT) in these patients remains controversial. Especially since survival for patients with pancreatic adenocarcinoma remains poor, determining the most appropriate adjuvant therapy is important.

Unanswered questions remain regarding what types of patients benefit from adjuvant EBRT. Are there other factors that might predict who benefits from adjuvant radiotherapy?

We utilized the SEER database to study the role of radiation therapy in disease-specific outcomes in pancreatic adenocarcinoma patients with various presentations of disease who underwent different oncologic surgeries [9]. Our aim was to elucidate subsets of patients who may or may not benefit from adjuvant radiotherapy.

Descriptive statistics (including mean, standard deviation, median, range, frequency, and percent) were calculated to characterize the study cohort in relation to demographic, prognostic, and treatment factors of interest. The primary endpoint was cause-specific survival (CSS). CSS was ascertained by selecting pancreatic cancer as the cause of death in the SEER database search. Deaths due to causes other than pancreatic cancer were censored when estimating CSS. CCS was defined as the time from diagnosis until death from pancreatic cancer (or until date of last follow-up or death from other cause). Kaplan- Meier survival analysis was performed to evaluate CSS and the log-rank test was employed to compare CSS between treatment, demographic, and prognostic factors of interest (i.e., receipt of adjuvant EBRT [primary predictor], age, race, type of surgery, tumor site, stage, grade, year of diagnosis, etc.). Multivariable Cox proportional hazards regression analysis was performed to estimate the independent effect of adjuvant EBRT on CSS, controlling for age, race, type of surgery, tumor site, stage, grade, number of regional lymph nodes removed, and year of diagnosis. Kaplan-Meier analysis and multivariable cox regression were also performed among the subset of patients receiving adjuvant EBRT, to identify demographic and prognostics predictor of CSS in patients treated with adjuvant EBRT. Collinearity between predictors in the multivariable models was evaluated prior to the formation of the final multivariable models. Hazard ratios reflect the increased (or decreased) risk of pancreatic-specific death. All p-values are two-sided with statistical significance evaluated at the 0.05 alpha level. Ninety-five percent confidence intervals (95% CI) for all hazard ratios were calculated to assess the precision of the obtained estimates. All analyses were performed using SAS version 9.4 (SAS Institute Inc., Cary, NC) and Stata Version 13.0 (StataCorp, College Station, TX). 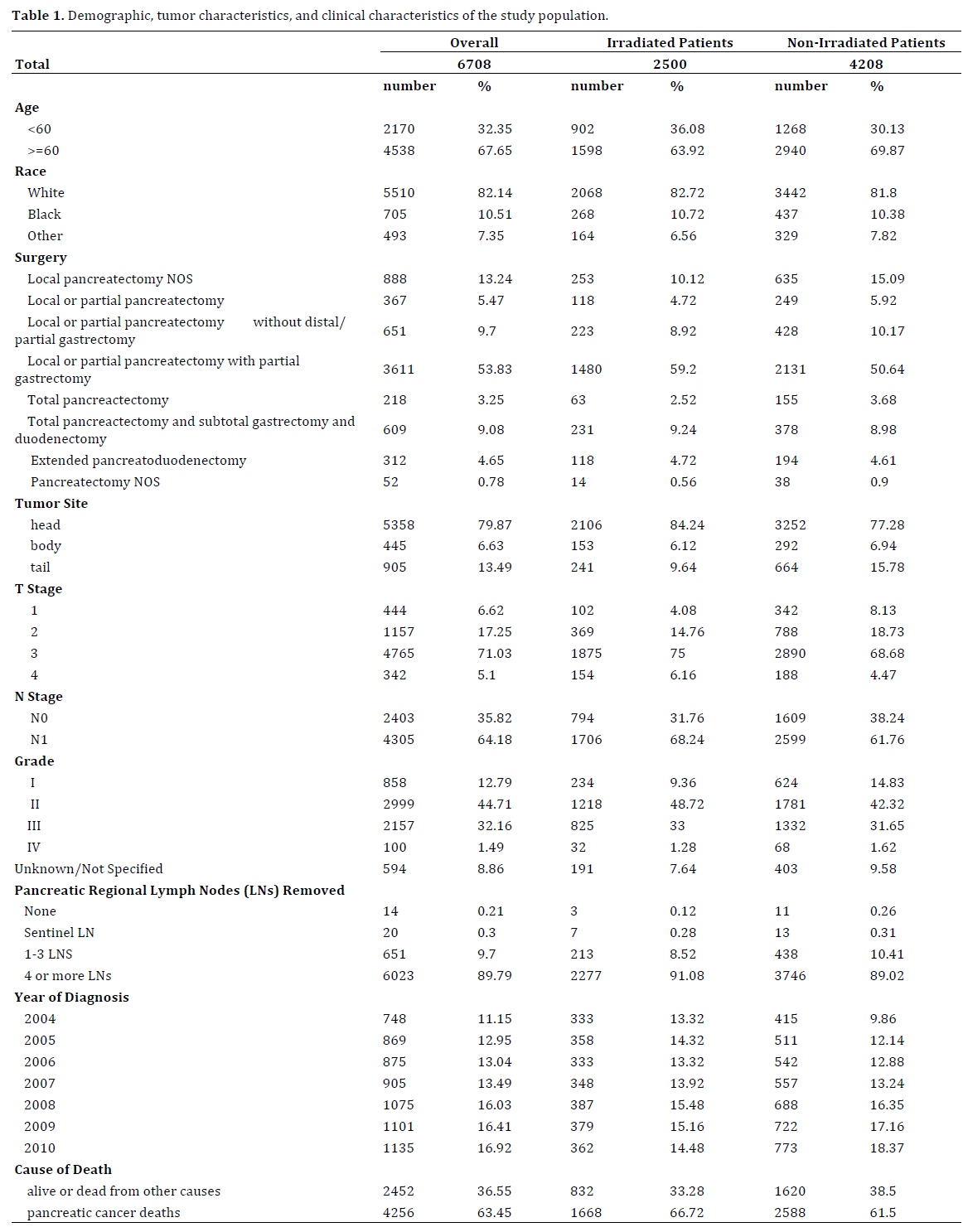 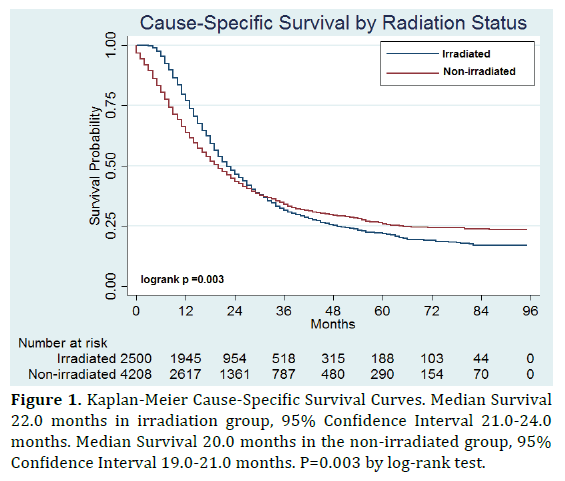 In the SEER database, patients receiving adjuvant EBRT after oncologic surgery are at decreased risk of dying from pancreatic cancer. Unfortunately, it was not possible to elucidate subsets of patients who may or may not share this benefit with the overall group based on prognostic factors or treatment approaches.

Baine and Lin conducted a retrospective review of patients treated at their institution and of national data from the SEER database. Five hundred sixty-one patients from their own institution were included, as were 60,587 patients from the SEER database. They analyzed patients diagnosed with pancreatic adenocarcinoma over a period of 16 years from 1995 and 2011. They adjusted for age, race, gender, stage, year of diagnosis, having surgery, and having chemotherapy (in the institutional data only, as SEER did not contain relevant data on chemotherapy). On Cox analysis, they found that receiving EBRT was an independent prognostic factor for an improved hazard ratio of dying from pancreatic cancer (HR=0.65, p<0.0001) [11].

Opfermann et al. analyzed 3,314 patients from the SEER database treated with surgery plus/minus adjuvant radiotherapy from 1998 to 2006. They also found a survival advantage in the radiotherapy group. OS was 19 months vs. 14 months favoring the radiotherapy arm (p<0.001) [13].

Interestingly, the HRDPC decreased in 2009 and 2010 as compared to 2004 for the overall population – this is worthy of further investigation. It may be due to an improvement in efficacy of the systemic agents utilized over the intervening years. If that is the case, these presumably matched agents did not make the same impact in the irradiated population. Unfortunately, SEER does not give us more information as to which systemic agents were used in these patients. RTOG 9704 was published in 2008. It was one of the important trials investigating the utility of gemcitabine as part of adjuvant treatment for pancreatic cancer. Perhaps gemcitabine was used more often after the publication of this trial, and could thus explain why patients in 2009 and 2010 did better in our analysis. However, this would still not explain why this advantage was seen in the overall population but not in the radiotherapy group.

It is important to note some important disadvantages of using the SEER database. This database does not report chemotherapy data and does not report the dose or duration of radiotherapy. In addition, margin status was not available in the SEER database for this group of patients. However, previous meta-analyses conducted have suggested that the benefit of adjuvant radiotherapy may be limited to patients with positive margins, so perhaps these patients were more likely to have gotten this adjuvant treatment in the SEER database, and thus would be over represented in the irradiation arm [7, 8]. Therefore, using databases which do include more information on chemotherapy, radiotherapy, and margin status would be useful in investigating the effects of these factors on survival in pancreatic cancer patients. Data from randomized clinical trials would be even better at investigating the impact of various treatment approaches.

The authors have no other conflicts of interest to report.