Treatment of Poorly Differentiated Neuroendocrine Carcinoma of the Pancreas

Neuroendocrine carcinoma is derived from neuroendocrine cells that are distributed throughout the body. This is a heterogeneous disease with common immunohistochemical and ultra structural properties. The poorly differentiated neuroendocrine carcinoma subtype is characterized by its non-secretory, aggressive behavior and frequently grows in the gastrointestinal and genitourinary tracts [1]. The median survival of patients with this disease who have distant metastases is about five months.

Current treatment paradigms are extrapolated from management guidelines for small cell lung cancer [1, 2]. These include surgical resection for resectable disease followed by chemotherapy with or without radiation for localized disease [3].

Alternatively, definitive chemoradiation can also be considered in this setting. For unresectable locoregional disease, chemoradiation remains the treatment of choice. Treatment for metastatic disease requires systemic chemotherapy with surgery and radiation reserved for palliation.

Traditionally, doublet chemotherapy consisting of etoposide and a platinum agent has been utilized in the treatment of poorly differentiated neuroendocrine carcinoma [4, 5]. Recently, several new agents have show promise in single agent setting. Studies are ongoing in utilizing these agents with etoposide and a platinum based regimen in the management of advanced poorly differentiated neuroendocrine carcinoma [6]. Alternatively, advances have been made in understanding molecular pathogenesis [7, 8]. This is particularly promising with respect to developing new agents for this difficulty to treat malignancy. There is currently no definitive second line chemotherapy option available for this disease.

What Did We Learn at the 2013 American Society of Clinical Oncology (ASCO) Annual Meeting?

There remains a lack of outcomes data in patients with poorly differentiated neuroendocrine carcinoma who undergo treatment. Loeffler et. al conducted a single center retrospective study of 50 consecutive patients who were diagnosed between January 2000 to April 2012. These patients were treated with a regimen consisting of paclitaxel (175- 200 mg/m2 i.v.; day 1), carboplatin (area under concentration-time curve (AUC) 6 i.v.; day 1 (no units for AUC were provided in the abstract)) and etoposide (50 mg alternating with 100 mg, orally; days 1-10) every three weeks. This regimen was previously studied by Hainsworth et al. in a phase II clinical trial. All patients were evaluated using CT scans which were reviewed according to the Response Evaluation Criteria in Solid Tumors (RECIST) criteria to detect response. The diagnosis was confirmed using immunohistochemical staining and a proliferative index was calculated for each pathological specimen.

The details of this study are depicted in Tables 1, and 2, while Tables 3 and 4 show the study results. The major toxicity of this study was myelosuppression which required dose reduction of paclitaxel to 175 mg/m2 in 40 (80%) patients. This study appears to show promising evidence in using triple therapy regimens for treating poorly differentiated neuroendocrine carcinoma and provides groundwork for a larger, prospective multicenter clinical trial studying this regimen. 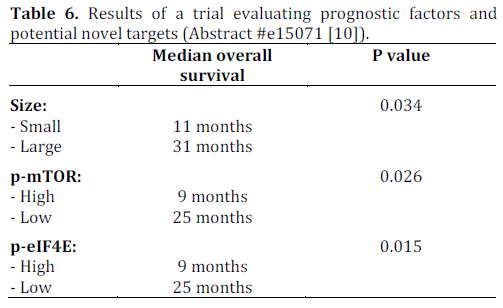 A multivariate Cox regression analysis showed p-mTOR and p-eIF4E to be independent prognostic indicators after taking cell size and TNM staging into account. Expressions of somatostatin receptor subtypes, Ki67 index and response to first line chemotherapy were not associated with prognosis when analyzed by log rank test. These results suggest that m-TOR inhibitors may potentially be of therapeutic benefit in patients with poorly differentiated neuroendocrine carcinoma according to this small study. Of note, everolimus, an m-TOR inhibitor was approved by the FDA in May 2011 for use in progressive or metastatic pancreatic neuroendocrine tumors that cannot be removed surgically.

In this paper, we discussed two studies that show promising evidence for new treatment modalities. The results from these studies support the need for additional investigations. However, it would be premature to draw any other definitive conclusions from these studies given their limitations. Both of the studies were small and retrospective. Retrospective studies can be associated with selection biases and small studies are usually underpowered to detect a statistically meaningful difference.