Context It has been reported that two-staged pancreatoduodenectomy including the first operation without pancreatoenteric anastomosis followed by later pancreatojejunostomy in the second operation is a safe method for high-risk patients. But this procedure requires twice laparotomy. Here we report an improved method to avoid the second operation using interventional technique. Case report A Seventyone- year-old man with a lower bile duct carcinoma who had repeated hemorrhage by duodenal ulcer and deterioration in the liver function underwent pancreatoduodenectomy. Because of the high risk situation, we selected the complete exteriorization of pancreatic juice without pancreatoenteric anastomosis to avoid pancreatic fistula. Three months after operation we performed interventional pancreatic fistulo-jejunostomy by puncturing the pancreatic fistula into the jejunal loop under endoscopic observation followed by insertion of 8Fr. internal drainage tube between pancreatic fistula and jejunum using double guide wires. Conclusion No complication occurred during and after procedure.

Despite decreases in operative mortality after pancreatoduodenectomy (PD) due to improved surgical methods and perioperative care [1, 2, 3, 4], life-threatening complications such as pancreatic leakage [5, 6] and consequent arterial bleeding [7, 8] are of great concern especially in the elderly patients with poor liver function or in emergency situations.

An effective surgical method to avoid these complications, two-staged PD followed by later pancreatojejunostomy was previously advocated by Miyagawa et al. [9]. This procedure has already improved safety in high risk cases, but could be improved further.

In an effort to improve on the procedure we modified two-staged PD and propose a new strategy for PD in high risk cases; here we report our findings in a successful two-staged PD including interventional pancreatic fistulojejunostomy.

A Seventy-one-year-old male patient was rushed to our hospital in a state of shock induced by melena and a hemorrhage caused by a PTBD tube inserted to treat obstructive jaundice. Serum total bilirubin level was 11.3 mg/dL, and PTBD tube was inserted into common bile duct without passing the obstructive site. Emergency gastroduodenal endoscopic examination revealed bleeding from a duodenal ulcer as a result endoscopic clipping and three times angiographic coil embolization for pancreatic arterial arcade were performed. Hemostasis was obtained and subsequent cholangiography using contrast medium via a PTBD tube revealed stenosis of the lower bile duct compatible with bile duct cancer. The enhanced computed tomography showed no metastasis in other organs.

Although he had just recovered from shock status, he underwent surgery because the laboratory data showed his liver function and jaundice was getting worse. PD was performed in a standard manner except complete exteriorization of the pancreatic juice was performed by inserting a 6 Fr.pancreatic tube into the main pancreatic duct and the pancreatic remnant was covered with a condom. The key to this procedure is the arrangement of the pancreatic tube adjacent to the jejunal loop during gastrojejunal anastomosis as this insures subsequent interventional pancreatic fistulojejunostomy is easy to perform.

No complication occurred after operation. He was discharged on 28th post-operative day. One hundred days later, interventional internal drainage was carried out as follows. Before the second stage procedure, the 6Fr. pancreatic tube was substituted for the 16Fr. phycon® drainage tube (Fuji Systems Corporation, Japan) and pancreatic fistulography followed by computed tomography with reconstructing 3D imaging was performed. This revealed the spatial relation between the pancreatic fistula and the jejunal loop. We simulated puncturing the pancreatic fistula into the jejunum with this 3D image to facilitate internal drainage (Figure 1).

Figure 1: Preoperative image of computed tomography and its 3D reconstruction shows the spatial relation between pancreatic fistula and jujunal loop. The white tube is the’16Fr.phycon® drainage tube which is placed along the fistula made inside the condom. Arrow shows the simulation of puncturing direction.

The pancreatic fistula was punctured into the jejunum with a EUS-FNB needle under endoscopic observation (Figure 2). Endoscopy was necessary to ensure that the needle was pushing against and sticking to the jejunal wall. After penetration a guide wire was inserted into the jejunal lumen via the needle. After this step both endoscopy and radiography were simultaneously performed. Then the guide-wire was caught and held with endoscopic forceps until the needle was replaced with an 8Fr. internal drainage tube (Cliny Internal Drainage Tube®, CREATE MEDIC CO.LTD) following dilation through the guide-wire (Figure 3). 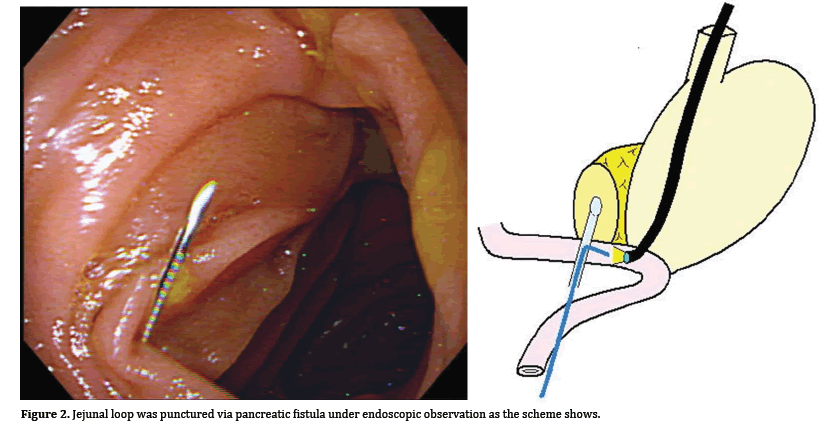 Figure 2: Jejunal loop was punctured via pancreatic fistula under endoscopic observation as the scheme shows.

At this point internal drainage was still incomplete because the drainage tube was placed from the remnant gastric lumen through the pancreatic fistula and out of the abdominal cavity. Five days later the drainage tube was substituted with a T-tube using the interventional radiographic technique (Figure 4). The ends of the T-tube were separated; one in the remnant gastric lumen another in the pancreatic fistula. Seven days later the final step was to replace the T-tube with a “lost tube” made of 8Fr. internal drainage tube, which enabled the pancreas juice to drain completely into the jejunal or gastric lumen (Figure 5). The internal drainage of pancreatic juice was completed without leakage or any peri-procedural complications. He was discharged on the 13th day after interventional procedure. He has been free of recurrence in 5 years, and he never suffered from any pancreatic disorder during this period. 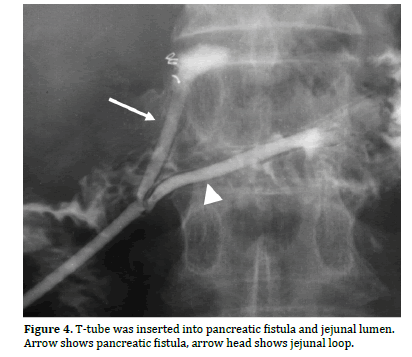 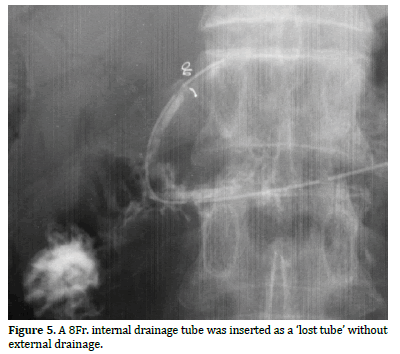 Pancreatoenteric anastomosis is still considered to be dangerous especially in high risk patients because it is fatal if a major pancreatic leakage occurs. In particular the major arterial bleeding following pancreatic leakage is a crucial element in postoperative mortality. Although, it might be acceptable that operative mortality decreased to less than 4% in high-volume centers as Yeo et al. [10]. Reported, we should have safer procedure for PD in high risk cases. The usefulness of using an occlusion balloon catheter during laparotomy to control intra-abdominal hemorrhage related to PD was reported [11], but it is essential that pancreatic leakage is avoided. Total pancreatectomy and occlusion of the remnant pancreatic duct with ligature or prolamine [12, 13, 14] have been employed to reduce the risk, but these procedures were shown to result in the loss of exocrine and endocrine functions of the pancreas. Hence Miyagawa et al. [9] devised two-staged PD with external drainage of pancreatic juice during the first operation and subsequent pancreatojejunostomy in the second operation. This method is highly effective in performing PD without pancreatic anastomosis during the first stage. In risky cases such as concomitant major hepatectomy [15] or in emergency patients, subsequent anastomosis can be carried out after liver function and the general condition of the patient normalizes. But this technique imposes twice laparotomy on patients, and as there is a need for a second operation it is essential that the pancreatic fistula is handled very carefully. A further drawback of this technique is that it requires pancreatojejunostomy performed by suturing in the second operation. Kubota et al. [16] reported in 4 of 24 patients (16.7%) leakage occurred after the second operation.

Thus we propose a new strategy for PD in high risk cases, which consists of the two techniques described above; staged PD with complete exteriorization of pancreatic juice and subsequent interventional pancreatic fistulojejunostomy. Our methodology makes the former staged PD more widely available because laparotomy is only performed once and has no pancreatoenteric anastomosis, except a pancreatic fistula-jejunostomy which is not sutured. Some surgeons may think this interventional procedure is complicated, but it can be simplified as the substitution for T-tube can be omitted. In this case we used T-tube for further assurance and we would recommend this for patient safety.

Though appraisal and establishment of this technique require more case studies, staged PD including the IVR approach is recommended in high risk cases.