A Patient with Signet Ring Cell Carcinoma of the Pancreas with a Prolonged Course: A Case Report

A Seventy-one-year-old man presented with icterus and malaise. A computed tomography scan showed a tissue mass in the head of the pancreas with compression and dilation of the common bile duct. The patient underwent endoscopic retrograde cholangiopancreatography, a metal stent was placed in the common bile duct and a pancreatoduodenectomy was planned. At operation invasion in the portal vein was observed. On-site histopathology of the tissue revealed only inflammation and no cancer cells. It was therefore decided to perform a gastroenterostomy instead. As autoimmune pancreatitis was suspected, treatment with corticosteroids was started, but did not result in a reduction of tissue mass. After a few months, the patient developed venous thrombosis in the portal and superior mesenteric veins, with colorectal varicose veins and episodes of bleeding. The patient died of excessive weight loss due to mesenteric venous thrombosis. Post-mortem histopathological examination of the soft tissue mass of the head of the pancreas showed signet ring cell carcinoma.

A seventy-one–year-old Caucasian male presented at a teaching hospital with icterus and malaise. His medical history included coronary heart disease with percutaneous coronary intervention (PCI) 10 years earlier and also an episode of abdominal pain and transient icterus 10 months previously, which had been diagnosed as pancreatitis. At that time, abdominal ultra-sonography had shown no gallstones or other abnormalities. At this presentation, the laboratory results showed elevated cholestatic liver enzymes with a total bilirubin concentration of 634 μmol/L (reference range <17 μmol/L), direct bilirubin of 539 μmol/L (reference range <5 μmol/L) and alkaline phosphatase 268 IU/L (reference range <115 U/L). Carbohydrate antigen 19.9 was just slightly elevated 53 E/ mL (reference range <37 E/mL). Abdominal computerized tomography (CT) revealed a tissue mass in the head of the pancreas with compression and dilation of the common bile duct (CBD), which was confirmed by endoscopic retrograde cholangiopancreatography (ERCP). During the ERCP a sphincterotomy and brush of the CBD was performed, followed by placement of a metal stent to ensure biliary drainage. Brush cytology showed no signs of malignancy. On suspicion of distal cholangiocarcinoma or carcinoma of the pancreatic head, the patient was referred to the surgical department for a pancreatoduodenectomy (Whipple procedure). During the operation, invasion of pathologic tissue was found around the portal vein. On site histopathology of the tissue revealed inflammation and no cancer cells. Taking these histopathology results and the invasion of the portal vein into account, instead of pancreatoduodenectomy a gastroenterostomy was performed. The resected surgical specimen showed diffuse inflammation. The icterus gradually resolved and the patient was discharged in good condition, with a working diagnosis of autoimmune pancreatitis.

Four months later, he presented with abdominal pain but no signs of icterus or fever. An abdominal CTscan showed thrombosis of the portal vein. The size of the tissue mass around the celiac artery, portal vein and pancreatic head had remained stable (Figure 1). IgG4 was 0.74 g/L (reference range 0.08-1.40 g/L). Because IgG4-negative autoimmune pancreatitis (AIP) was suspected, corticosteroid treatment (prednisone 40 mg once daily) was started. In addition, treatment with oral anticoagulants was started for the thrombosis of the portal vein. This combined treatment resulted in the restoration of the well-being of the patient. Three months later the oral anticoagulants had to be discontinued due tosevere rectal blood loss from extensive colorectal varicose veins, and the patient was referred to our university hospital for a second opinion. An abdominal CT scan to evaluate the prednisone response showed enlargement of the venous thrombus in the portal vein with expansion into the superior mesenteric vein and even into the inferior mesenteric vein, as well as some minor ascites. In addition, the size of the pancreatic head tissue mass was found to be stable. Cytological examination of the ascites revealed no malignancy. Figure 1. Soft tissue mass (arrow) in the head of the pancreas and around the celiac artery, portal vein and superior mesenteric artery, with a metal stent in the CBD.

A Positron Emission Tomography (PET) scan to detect or rule out malignancy in the pancreatic head or elsewhere, showed only staining of the tissue mass of the pancreatic head and portal vein region. Two attempts at fine needle aspiration (FNA) under endoscopic ultrasound guidance were madein order to get new material for cytology, but both were unsuccessful as neither the pylorus nor the anastomosis of the gastroenterostomy could be passed. Total parenteral nutrition was started for severe weight loss-27 kg in 6 months-due to abdominal pain caused by the mesenterial thrombosis. Even so, the patient died about one-and-a-half years after he first presented. A postmortem examination was performed.

On macroscopic examination at autopsy, the pancreatic head was seen to be enlarged and fibrous. Thorough examination showed no other suspected tumor foci, in particular no stomach, breast or colon lesions were detected. Histopathological examination of the soft tissue mass in and around the head of the pancreas revealed an adenocarcinoma. The tumor consisted of poorly cohesive round tumor cells with intracytoplasmic mucin and a peripherally placed, flattened nucleus (Figure 2). Because over 50% of the tumor showed this characteristic differentiation, it was classified as signet ring cell carcinoma. There was invasion of the celiac artery and the superior mesenteric artery, but no tumor cells were found in regional lymph nodes. There were no signs that the neoplasia was of ampullary or duodenal origin. Histopathological tissue specimens obtained at the operation 18 months previously were re-examined, but no signet ring cells were identified in these tissues (Figure 3). 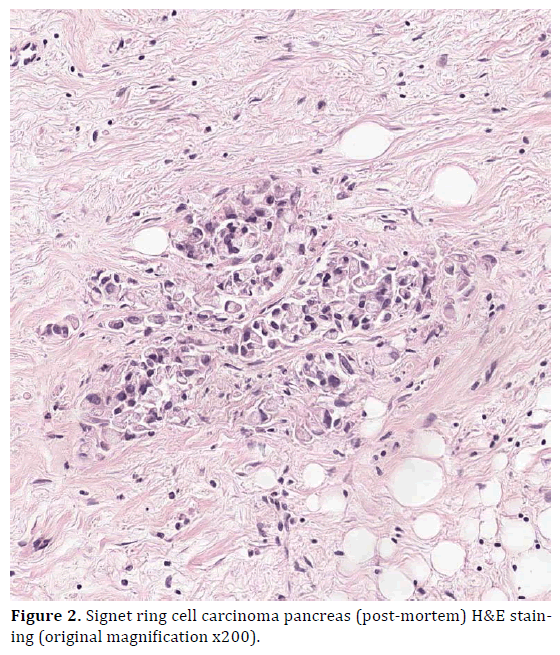 Carcinoma of the pancreas is a common malignancy, the incidence rate in the Netherlands in 2014 was 23:1000 persons per year [1]. Ninety-percent of pancreatic tumors are ductal adenocarcinomas; other histological types are relatively rare. When intracytoplasmatic mucin is abundant, it pushes aside the nucleus of the cell, resulting in a so-called signet ring cell. If more than 50% of the tumor is made up of cells of this type, it is classified as signet ring cell carcinoma (Figure 4). 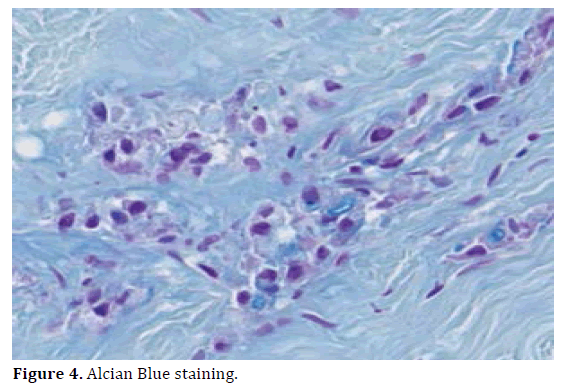 We present a case of signet ring cell carcinoma of the pancreas which was only revealed at post-mortem examination. All other published cases of pancreatic signet ring cell carcinoma had a fulminant course [2,3,4,5,6] Conversely, in our patient, it had an unusually prolonged course. Although true histology was obtained at laparotomy, it was not conclusive. The final diagnosis was determined by post-mortem histopathological examination. The abnormal soft tissue mass in and around the head of the pancreas remained stable in size during our observation period, which could be consistent with a type 2 IgG4-negative AIP. However, as no improvement was observed after corticosteroid therapy, this diagnosis was rejected. Even after careful review of the first tissue specimen of the pancreatic head, we were unable to find any tumor cells. This can be explained by sampling of the inflammatory matrix surrounding the pancreatic carcinoma. At autopsy, no other primary tumor sites were noted. The pathologist particularly looked for lesions of the gastric or duodenal wall, and of the ampullary region as signet ring cell carcinoma is more common at these sites. Reflecting on our case, we would like to underline the presence of a peri-tumoral stromal fibrosis in patients with pancreatic carcinoma, which is a hallmark of this disease and can cover up the truth. A pancreatic mass should always be considered to be malignant, until proven otherwise.